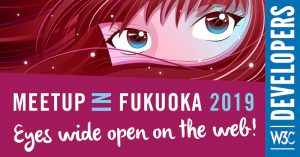 Taking advantage of the presence of world renowned experts in Fukuoka, Japan, W3C invites Japanese Web developers and designers to attend a  W3C developer meetup, on Monday 16 September (from 6:00pm to 8:30pm). This event is free of charge but registration is mandatory! (登録してください!). [Important: TPAC participants are invited to register to the devmeetup via the TPAC registration form.]

Why in Fukuoka? The W3C international community is gathering in Kyushu island for a week to attend the annual W3C TPAC (Technical Plenary /  Advisory Committee) event. Over 550 people are meeting to coordinate the development and adoption of Web standards in W3C’s working groups, community groups,  the Advisory Board, the Technical Architecture Group (TAG), etc.

The developer meetup is thus a great opportunity for developers and standardistas alike to mingle and converse on the current status and the future the Web platform, aka to keep their “Eyes wide open on the Web“!

A great line-up of speakers

In between demonstrations shown by the devmeetup sponsors, we are going to find out what is making the Web an exciting development platform by listening to these five great speakers experts in Web accessibility, WebXR, Web Assembly, CSS and 3D Graphics on the Web, respectively:

Because Web standards and guidelines should be available in any language to help developers and designers to make a better Web the world over, W3C has been accompanying the community interested in translated its resources for more than 15 years.

On the 300+ current W3C Recommendations, nearly half have been translated in at least one language. The Japanese translators community –the most active to date–, has translated more than a quarter of these 300 Recommendations!

We are proud to recognize the W3C Japanese translators community by inviting some of its representatives at the devmeetup (see the completed translations – W3C 文書の日本語翻訳集).

Thanks to our sponsors!

This event would not have been possible without the support from this 2019 edition sponsors: NTT Communications, Microsoft, GMO Pebabo, Mozilla, Sauce Labs, Sticker Mule, Igalia, Yubico, Webcastor and WithYou. Many thanks to them! どうもありがとう！ 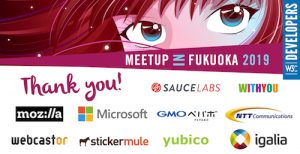