Looking back at TPAC 2019; public release of W3C Strategic Highlights

We held TPAC 2019 last week in Fukuoka, Japan. TPAC is our annual five-day event where W3C’s global community, working groups, community groups, the Advisory Board, and the Technical Architecture Group (TAG) coordinate the development of Web standards. Everyone meeting in one place once a year is invaluable as groups make tremendous progress and are able liaise with participants from other groups.

TPAC 2019 was fast-paced and energizing, productive, interesting and enabling. Many attended it for the first time. Many came with their fears for the Web and left with greater hope.

The records of most meetings are publicly available (please, follow the links in the detailed schedule) except for the Advisory Committee Meeting. The record of the Technical Plenary Day is public and includes photos, and the Technical Plenary Unconference agenda page already contains most of the summaries of the 59 breakout sessions that took place. Participants are invited to provide feedback on their TPAC week by 18 October 2019.

People used #w3cTPAC to refer to the event on social networking sites. We compiled a few tweets in our TPAC 2019 “moment”

We are looking forward to TPAC 2020, 26-30 October 2020 in Vancouver, Canada, and already invite you to let us know if you plan to be a Diversity Scholarship sponsor for 2020.

The TPAC week in figures

W3C Invited Experts bring particular expertise to W3C Groups and are invited by the Chairs (as opposed to being employees of W3C Members nominated by their W3C representatives) and approved by W3C management. Active contributors in groups that meet at TPAC and who are self-funded may attend TPAC for free.

This waiver is sponsored by W3C Members who register to the event and agree to a nominal 5% fee addition (those who do not, have the ability to opt out.)

This year’s Diversity fund raised nearly US $15K and allowed us to fully cover travel and accommodation for 7 attendees from under-represented groups whose registration fees were also waived. 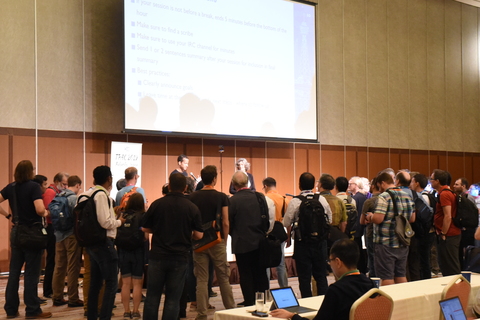 This year, for maximum efficiency and inclusivity, we proposed a “no-scramble” approach to designing the unconference agenda, offered 5 slots with 12 rooms for the day (→ 60 sessions possible), and developed a mobile-friendly agenda page. That page already contains most of the summaries of the 59 breakout sessions that took place.

By popular request, we have used “Unconference” at TPAC since 2011 as the format of most of the Plenary day, where dozens of sessions take place in several tracks: an opportunity for everyone to propose, choose, and participate in breakout sessions on a wide variety of topics relating to W3C activities, and a chance to contribute to discussions and connect with people working on ideas that may not fall within their usual areas of activity.

This year, as many breakout sessions as possible were identified ahead of the actual plenary day, thus ensured a more inclusive process in how these sessions are defined and scheduled (and avoided the massive onslaught with post-it notes that disadvantages anyone new to W3C, or new to Unconference methods, and creates issues from an accessibility perspective as well as from the inclusivity standpoint)

This year, our Advisory Committee heard from Jun Murai, who is called the ‘father of the Internet in Japan’ and is a Member of the World Wide Web Consortium Steering Committee.

Murai-sensei’s keynote, titled “Web on the Internet Civilization”, was about how the Internet is connecting the world and is a global, single and international, space for creation, and how 5G and other telecommunication break-throughs are transforming our lives. Our one Web sits on top of the Internet and enable wonderful advances in the industries –medical, agricultrure, transportation, education, finance– that the Web vertically connects.

I would like to quote one part of his inspirational address, that to me best represents the astounding breadth and stakes for which the World Web Web Consortium strives for to make the Web work, for everyone:

Today we are releasing to the public the September 2019 edition of the W3C Strategic Highlights.

The report highlights the massive and critical work that takes place at the Web Consortium toward the growth and strength of the Web. I invite you to read it for updates in key areas, how W3C meets industry needs, and the latest around Web for all and outreach to the world.

One thought on “Looking back at TPAC 2019; public release of W3C Strategic Highlights”