There is increasing awareness of the need for greater diversity in the tech field. We would like W3C to be a model of supporting diversity. W3C stakeholders have established a TPAC Diversity Fund. As an international organization, we see the immense value we gain from having greater diversity and expertise from across multiple countries and cultures. 50% of the world is now using the web. We know we need to reflect the diversity of the whole world as more and more people continue to access, use and create the Web in all its full potential.

We are happy to share an update to the gender and geography figures we shared last year.

Promotion of diversity and inclusion

Last year, the W3C Advisory Committee discussed actions that W3C should take to promote diversity, such as annually publishing our diversity statistics, or encouraging fellow Advisory Committee representatives to nominate a more diverse set of people to run for Advisory Board and Technical Architecture Group Elections. Both of which are happening, indeed. And more.

Applicants should be from a group that is under-represented in the Web community, and unable to attend TPAC without financial help. The application form has further information notably on what “under-represented” means, and applications are due by 14 July.

We hope to support multiple applicants. Therefore, please indicate whether you may be able to potentially share costs on some of the costs that you have mentioned.

After 26 July, applicants will be notified personally and recipients will be able to register in time for TPAC

If your organization or yourself wishes to become a sponsor, please e-mail us!

This year’s fund is modelled after last year’s promising experience. Prompted by the proposal of W3C Member Samsung Electronics to fund a “TPAC Diversity Scholarship”, W3C Members The Paciello Group, Consensus System and Microsoft stepped up to join as sponsors.

Two individuals were able to attend TPAC 2018 as recipients of this scholarship. One of the awardees from last year shared with us the difference it made to be able to attend the meeting of a group they had been involved in, and to be able to contribute. Spurred by that experience they even have taken up the leadership of a task force in that group. There are many more we would like to bring to TPAC this year.

Creation of the Inclusion and Diversity Community Group

2018 also saw the creation of the Inclusion and Diversity Community Group, chaired by Léonie Watson of Tetralogical, and Coralie Mercier of W3C. The group started under the name of W3C Women Community Group as a place for women at W3C to connect, but defined for itself a new name and scope at their TPAC meeting, inclusive of everyone willing to participate to the following mission:

The mission of the W3C Inclusion and Diversity Community Group (ID CG) is to increase the presence of under-represented groups at the W3C, and strengthen W3C culture by supporting diversity. To serve this mission, the CG will:

I will note that the Positive Work Environment Community Group is also chaired by women: Tzviya Siegman of Wiley, and Angel Li of Alibaba (and former W3C Staff member), and that being sensitive about diversity is part of a positive work environment.

Different participants are involved in different ways, with mailing lists and GitHub postings distributed across many locations. As we do not collect participants’ personal and demographic data to preserve privacy, it is difficult to gather data for different characterizations of diversity, but we are able to focus on gender and geography for several representative bodies (Advisory Board, Technical Architecture Group, W3C Management (W3M)).

The W3C Advisory Board provides ongoing guidance to the Team on issues of strategy, management, legal matters, process, and conflict resolution. The Advisory Board also serves the W3C Members by tracking issues raised between Advisory Committee meetings, soliciting Member comments on such issues, and proposing actions to resolve these issues. Created in March 1998, for several years, the AB has conducted its work in a public wiki. The elected Members of the Advisory Board participate as individual contributors and not as representatives of their organizations; the AB use their best judgment to find the best solutions for the Web, not just for any particular network, technology, vendor, or user.

Advisory Board positions are member-nominated. The 2019 W3C Process Document created two new seats, bringing the number of AB seats to eleven. The gender diversity of the AB has been improving, with four solid years of progress in the last years. This results from our continued outreach to encourage more women and underrepresented groups to run. 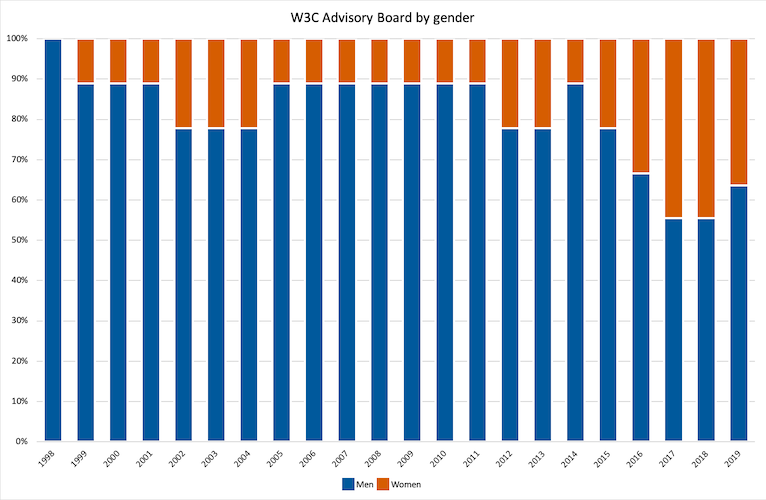 Looking at the Advisory Board by geography, all members during the first two years were from Northern America. Starting in the year 2009 and in subsequent years, we’ve improved the geographical diversity and it’s kept improving over these last few years. 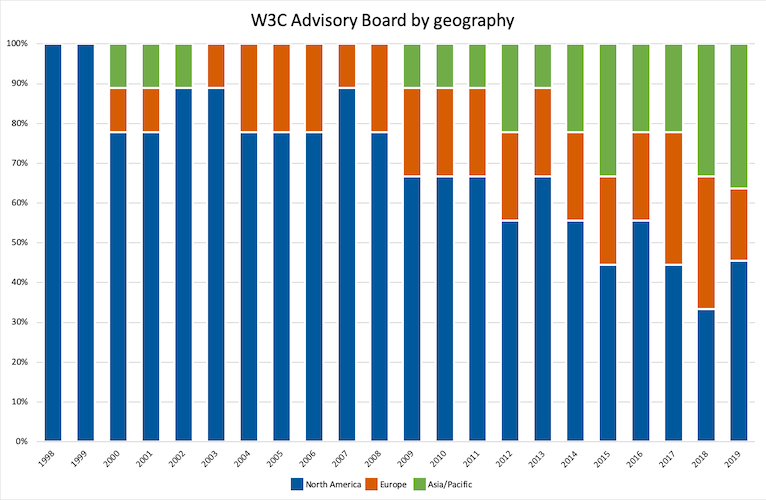 TAG positions are member-nominated or appointed by the W3C Director. Gender diversity has started to improve in 2011 –the 10th year of that group. Today, for the first time, a third of the TAG are women. We need to continue to make more progress towards greater diversity. 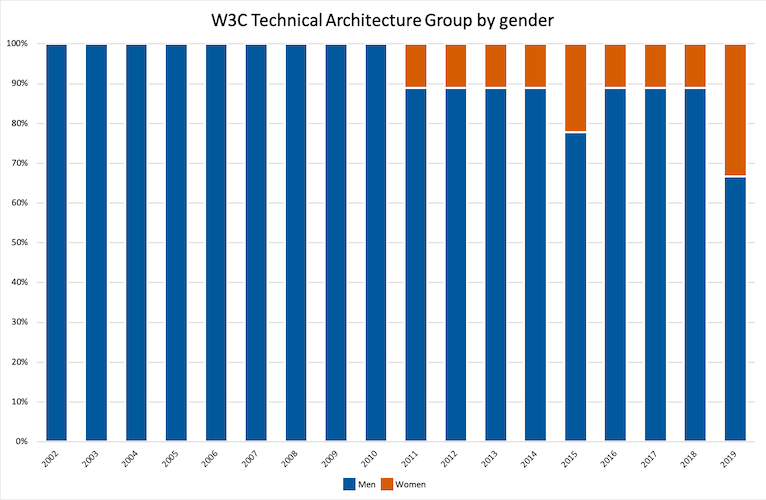 Looking at the TAG by geography, the European contingent is now the strongest. The Northern American’s representation is at its lowest ever. Asia/Pacific representation returned to its previous highest. Improvement in diversity has been happening starting 2013 as a result of outreach, including from the TAG itself, in search for the right people involved in building the Web in smarter ways. 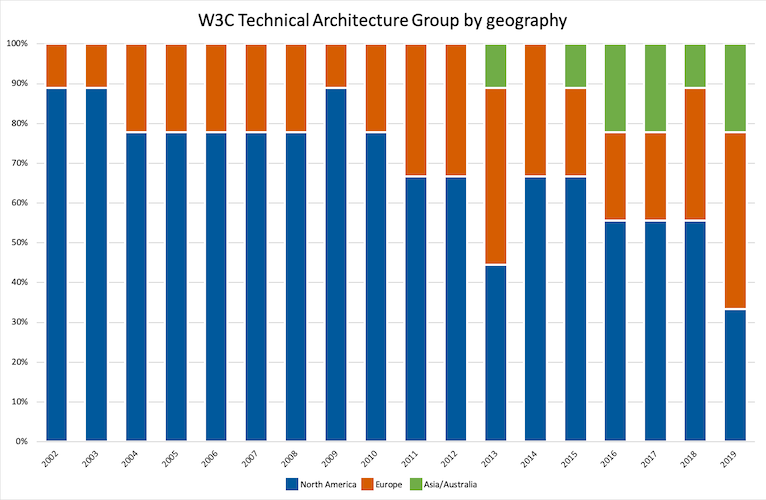 The W3C management team is responsible for the day to day coordination decisions for the team, resource allocation, and strategic planning.

The diagram uses percentages because the number of persons on W3M has changed over the years. There was a period when there was one woman at W3M. It has improved to some extent, trending toward increase. 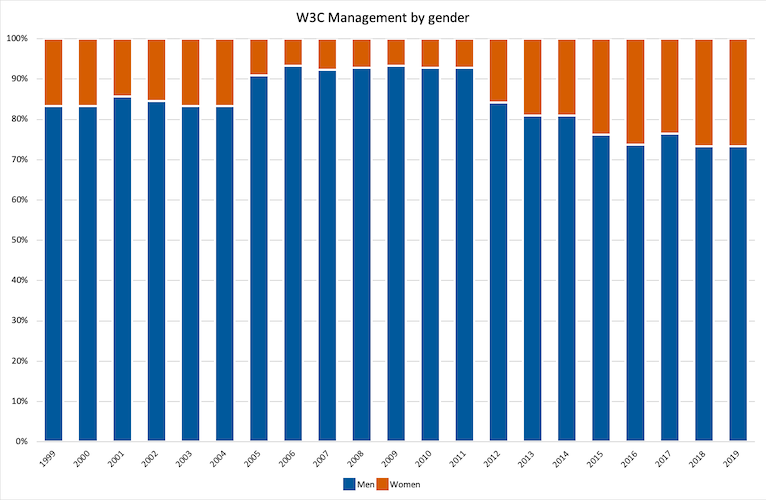 Looking at W3M by geography is relatively good, still a little tilted towards Northern America, but not as much as before. 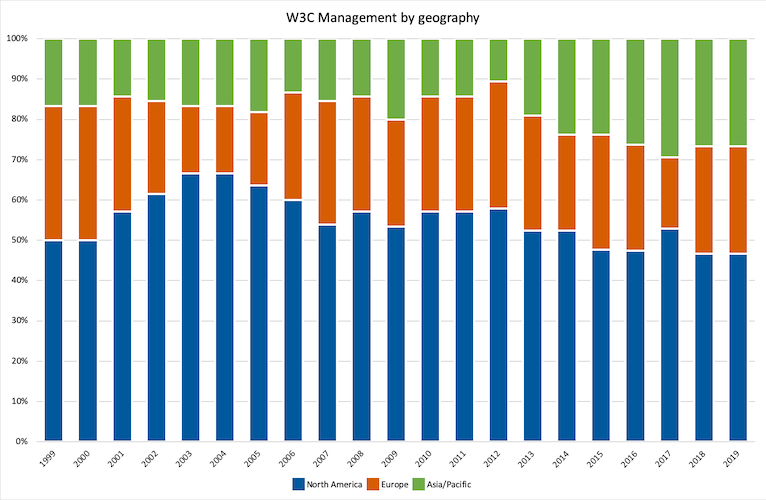 Updates since original publication on June 16, 2019:

One thought on “Diversity at W3C: 2019 update; launch of TPAC Diversity Fund”