Diversity and Inclusion at W3C: Inclusion Fund and Fellowships for TPAC 2021

60% of the world is online and we want and need to reflect the diversity of the whole world as more people continue to access, use and create the web. We believe that more diversity means better representation, which leads to better and more inclusive design. Indeed, more background, more use cases, more edge cases, lead to a better Web. More diversity also brings higher quality results.

We aspire to be a model in supporting greater diversity in technology. We continue to have a long way to go but we have taken steps and are doing the background work so that we both attract more diverse participants and also encourage them to be welcome in our environment.

In this post I report on related work and I also include an update of the gender and geography charts we shared last year and yearly since 2018.

The Black Lives Matter movement stimulated a conversation about diversity in W3C which furthered the attention that our community has given it these past few years.

Many from W3C groups, our Members, the W3C Team, and our extended community joined the Inclusion and Diversity Community Group (since then merged with the Positive Work Environment community group) to develop axes for improvement. We take to heart the message we internalized while focusing on BLM: we need to work on our own environment, to make our community more welcoming by recognizing and combating biases (including unconscious bias).

The Positive Work Environment Community Group prepared language guidance, developed training on conflict management, is proposing updates to our Code of Ethics and Professional Conduct (CEPC), and has been re-designing our TPAC Inclusion Fund (formerly ‘Diversity Fund’), which I will present in this post. Anyone is welcome to join the PWE Community Group to suggest steps that we can take to make a difference in the future.

The PWE group has designed the Inclusion Fund and Fellowships to respond to the obstacles that might block participation from underrepresented groups at our yearly conference, TPAC, and encourage outreach to new participants.

As this year’s TPAC will continue to be virtual, we are continuing the efforts to ensure that people can attend, for example through assistive technology or caring support. We are of course happy to hear ideas on what else the fund should support.

Examples of what the Inclusion Fund might help to cover:

Applications opened today, until August 15, 2021 (Note: being designed for people who would like to participate in our standards work or who already do, the form requires applicants to have a W3C account. Request one here.) The application form gives information on eligibility and how the applications will be assessed. Please, share this information with your teams, your friends that are concerned with TPAC participation, on your social networks, enterprise networks, at virtual meet-ups, etc. Also, consider encouraging someone directly if you think W3C could benefit from their attendance at TPAC.

In September 2021, we will open a different application period to award three to five persons a TPAC Fellow honorarium of US$ 500 to encourage participants in TPAC from underrepresented groups who may not have the wider support from their organization to dedicate to W3C goals, so they can contribute in a more meaningful way, such as:

The honorarium would pay for the work that they would have to do outside of their work to contribute in a meaningful way.

Contributions can be on any topic that is appropriate for TPAC, and don’t specifically have to focus on diversity. This fund recognizes that participating in these events can be time-consuming and people from unrepresented backgrounds face struggles within their workplaces and life that may mean they can’t prioritize attendance or a meaningful contribution without financial support.

Successful usage of the honoraria in 2020

For TPAC 2020, the Diversity Fund financially supported the work of 8 external contributors from underrepresented communities and was instrumental in the organization of 3 breakout sessions that explored the intersection of W3C technologies and the challenges facing underrepresented communities in using or shaping them to their needs: Creative Imagination for an Ethical Web, Accessing WebXR Through Art and Consent Communication on the Web.

In the feedback we collected on breakouts, these sessions were often quoted as the best of this TPAC edition and even the best ever by several participants.

Notes on the graphs and information collection: Because we do not collect participants’ data, to preserve privacy, it is difficult to gather data for different characterizations of diversity. We are able to focus on gender and geography for several of our representative bodies: W3C Advisory Board (AB), W3C Technical Architecture Group (TAG), W3C Management (W3M).

The W3C Advisory Board provides ongoing guidance to W3C on issues of strategy, management, legal matters, process, and conflict resolution. Created in March 1998, the AB has now for several years conducted its work in a public wiki. The elected Members of the Advisory Board participate as individual contributors and not as representatives of their organizations; the AB use their best judgment to find the best solutions for the Web, not just for any particular network, technology, vendor, or user.

The 11 Advisory Board positions are member-elected. The gender diversity of the AB has not changed this year. After the last election this month, the board has 4 women and 7 men for the third consecutive year. 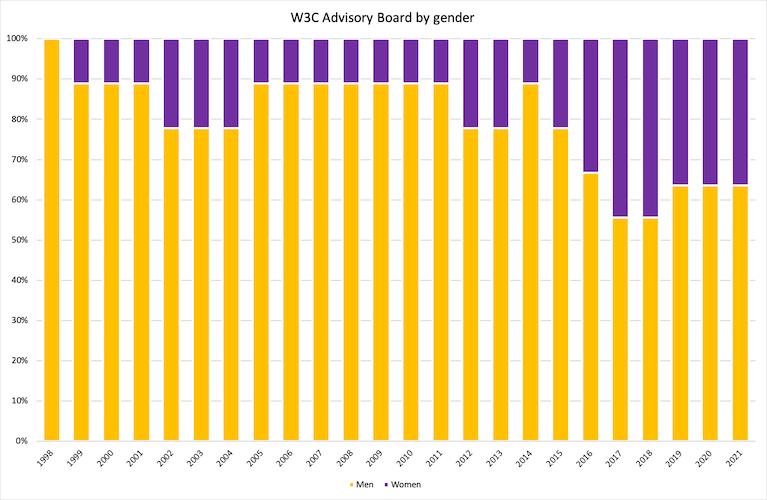 Looking at the Advisory Board by geography, we see that the geographical diversity which was heavily tilted toward North America between 1998 and 2009 steadily improved until reaching in 2018 an equal number of participants in each region. The Asian representation has expanded without regressing since 2016 and this year it is exactly the same as the Northern America’s. The European representation which was more or less consistently about 1/5th since 2004 and peaked around 1/3rd in 2017 and 2018, has continued to shrink after this and has been at its lowest for the second year in a row. 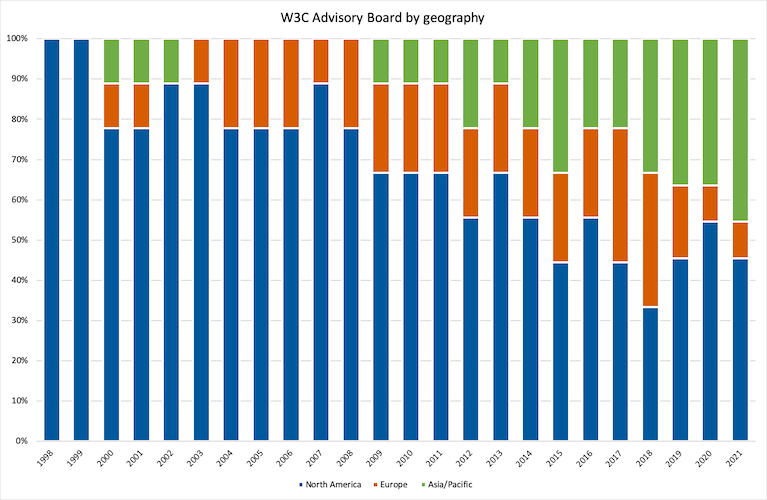 The 9 Technical Architecture Group positions are a mix of member election and appointment by the W3C Director. The group was composed only of men during its first nine years until 2011 when the TAG counted a woman during the next eight years except in 2015 where there were 2 of them. In 2019 and 2020, a third of the TAG were women. After the last election earlier this year, a non-binary member joined 3 women and 5 men in the TAG. 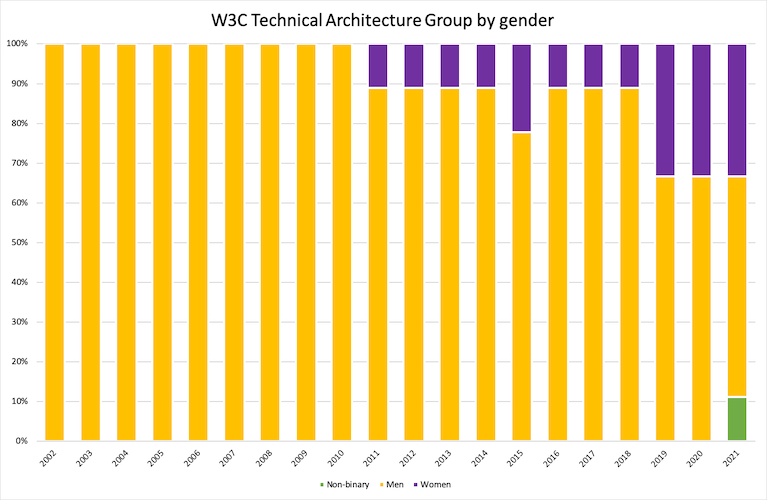 Looking at the TAG by geography, the European contingent is now the strongest –a first highest for that geography. The Asia/Pacific representation has shrunk to its minimum, and the Northern American continent hit the same lowest point as in 2019. 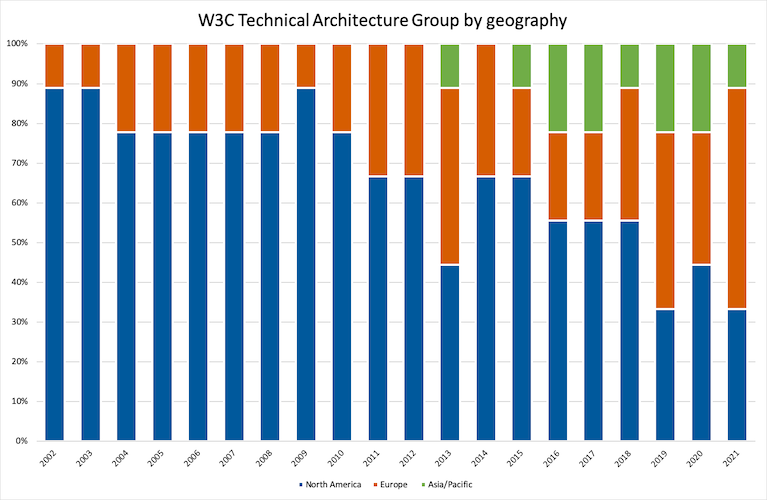 Note: The diagrams use percentages because the number of persons on W3M has changed over the years.

Gender diversity of W3C management continues to be heavily tilted toward male representation. It has improved to some extent because there was a period when there was only one woman on W3M. The trend toward an increase in female representation has started in 2012. It has been rather stable since 2016, with no change for the fourth year in a row. There are 12 men and 4 women in W3C management. 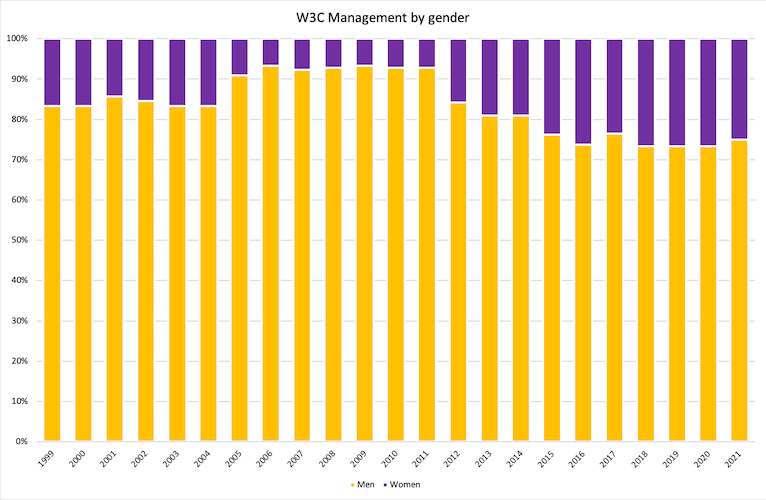 The geographical distribution in W3M is relatively good and has been trending steadily toward more balance since 2012. The Northern America contingent is still the most represented, but not as much as before. Asian representation has once again surpassed the European’s as it had in 2018. It is notable that for the 4th year in a row, the European and Asian representatives amount to slightly over 50% of the management. 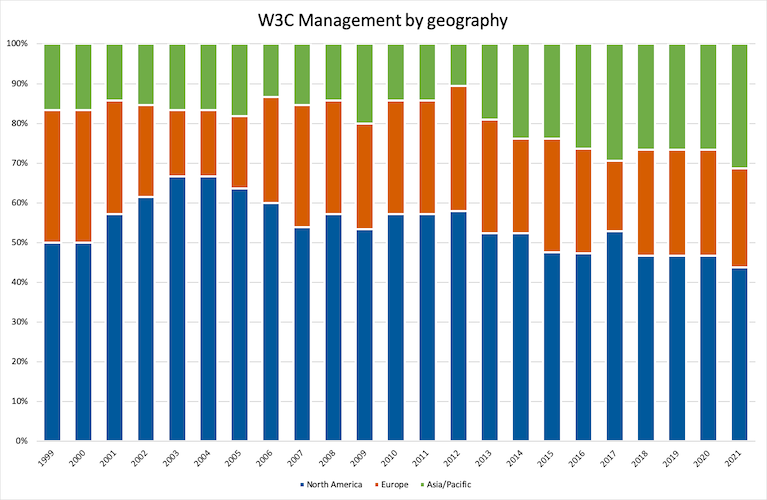 12 thoughts on “Diversity and Inclusion at W3C: Inclusion Fund and Fellowships for TPAC 2021”