Diversity and Inclusion at W3C: 2020 update; future of the W3C Diversity Fund

We must start, reflecting on our times, by saying clearly that we need to do a lot more to improve our diversity, equity, and inclusion (DEI) including race, gender and disability. We have a long way to go, and we’d like to start taking steps to correct it.

Work on DEI takes place in several areas at W3C but I’d like to specifically highlight the establishment of the Inclusion and Diversity Community Group in 2018, who wanted to increase the presence of under-represented groups at the W3C, and strengthen W3C culture by supporting diversity. Today, that group is increasing focus on developing concrete steps of how we can improve further. Additionally, I’m encouraging our community to participate in the IDCG and suggest steps that we can take to make a difference in the future.

We have made some progress in the last two years, although not as substantial as we’d hoped. Last week, reflecting on current events, we tweeted about revising our Code of Ethics and Professional Conduct. Among the W3C community values it highlights, is standing against prejudice, racism and discrimination. We have in the last year prepared a thorough revision of the 2015 version, to modernize our Code and be aligned with evolving norms. W3C Members are currently reviewing it and we expect to approve it in early July. The public Positive Work Environment Community Group which prepared this revision continues to focus on how to improve our environment and make it welcoming for all.

Future of the W3C Diversity Fund

We are committed to attracting a diverse community, and to that effect, W3C stakeholders established a TPAC Diversity Fund in 2018 to fund travel to and participation in our annual technical plenary meeting. This year, for the first time, W3C itself is contributing toward that Fund and we expect to continue contributing in subsequent years. Sponsors in the past have typically given $1,500 and we hope they will continue to do so. W3C has decided for 2020 to contribute $5,000.

With this year’s TPAC going virtual, we need to consider where to focus Diversity Fund efforts. One leading idea is to fund equipment which can help support community members who are underrepresented to allow them to participate better in TPAC, and also to improve their effectiveness beyond. Please let me know if you have other ideas.

The 2020 update to the gender and geography figures we shared last year follows.

Different participants are involved in different ways, with mailing lists and GitHub postings distributed across many locations. As we do not collect participants’ personal and demographic data to preserve privacy, it is difficult to gather data for different characterizations of diversity, but we are able to focus on gender and geography for several representative bodies: W3C Advisory Board, W3C Technical Architecture Group, W3C Management (W3M).

The W3C Advisory Board provides ongoing guidance to the Team on issues of strategy, management, legal matters, process, and conflict resolution. The Advisory Board also serves the W3C Members by tracking issues raised between Advisory Committee meetings, soliciting Member comments on such issues, and proposing actions to resolve these issues. Created in March 1998, for several years, the AB has conducted its work in a public wiki. The elected Members of the Advisory Board participate as individual contributors and not as representatives of their organizations; the AB use their best judgment to find the best solutions for the Web, not just for any particular network, technology, vendor, or user.

The 11 Advisory Board positions are member-nominated. The gender diversity of the AB has not changed this year after four solid years of progress resulting from our continued outreach to encourage more women and underrepresented groups to run. 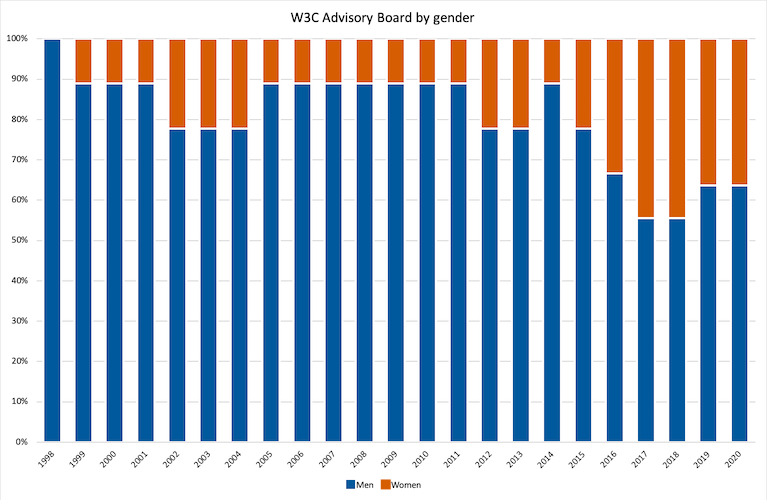 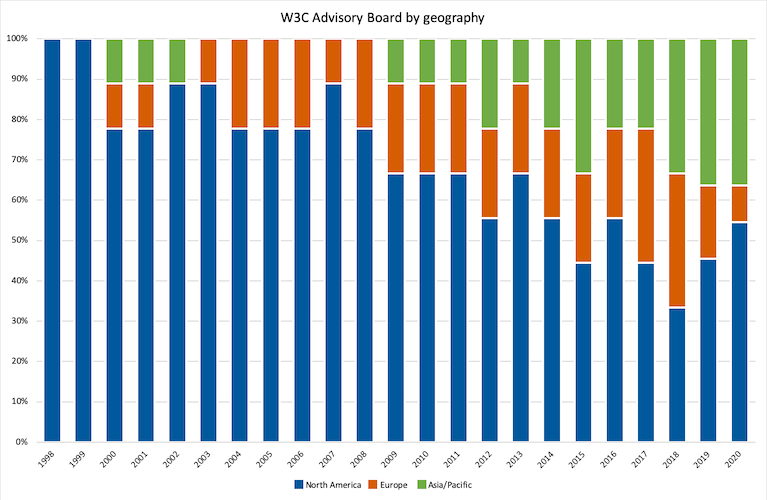 TAG positions are a mix of member nominations and appointment by the W3C Director. Gender diversity has started to improve in 2011 –the 10th year of that group. For the second year, a third of the TAG are women. We need to continue to make more progress towards greater diversity. 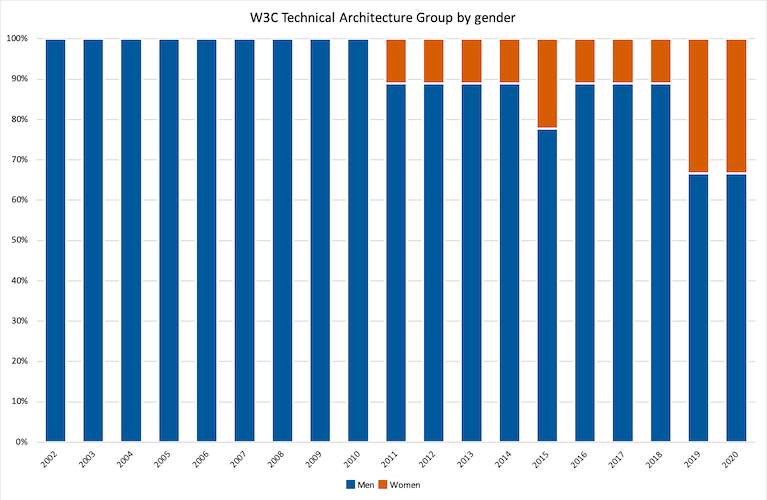 Looking at the TAG by geography, the Northern American’s contingent is now again the strongest with Asia/Australia unchanged at its previous highest, but the European representation remains fair. Improvement in diversity has been happening since 2013 as a result of outreach, including from the TAG itself, in search of the right people involved in building the Web in smarter ways. 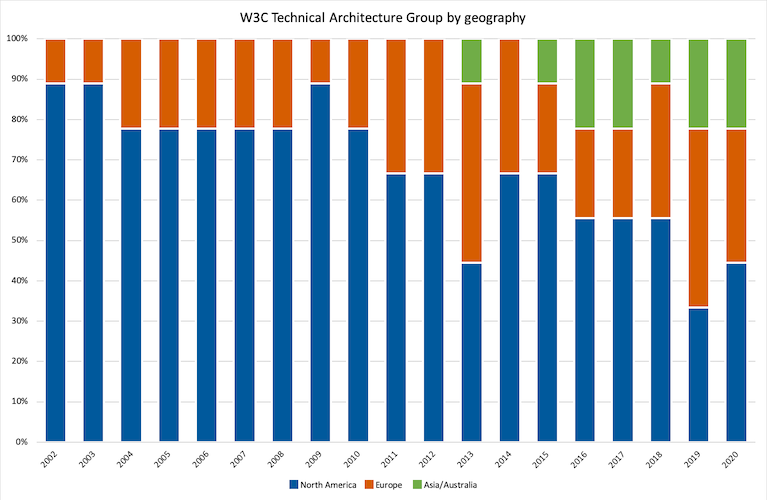 The diagram uses percentages because the number of persons on W3M has changed over the years. There was a period when there was only one woman on W3M. It has improved to some extent, trending toward increase with no change for the third year in a row. 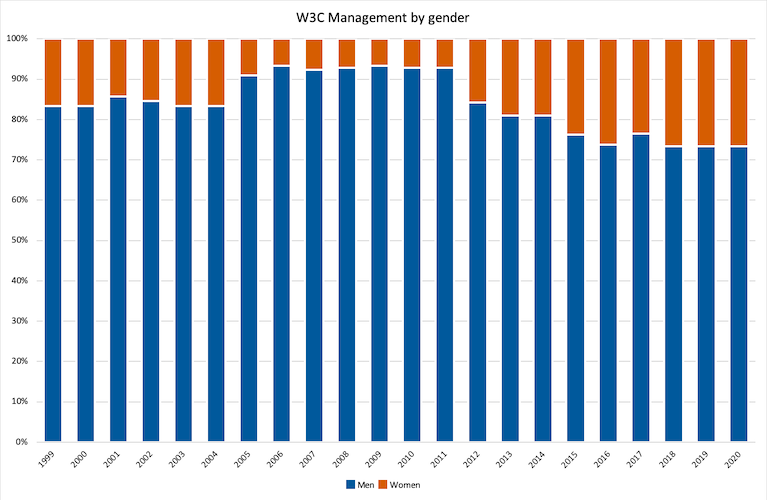 Looking at W3M by geography is relatively good, still a little tilted towards Northern America, but not as much as before. Asean and European representation are comparable, amounting to slight over 50%. This has not changed in the past three years. 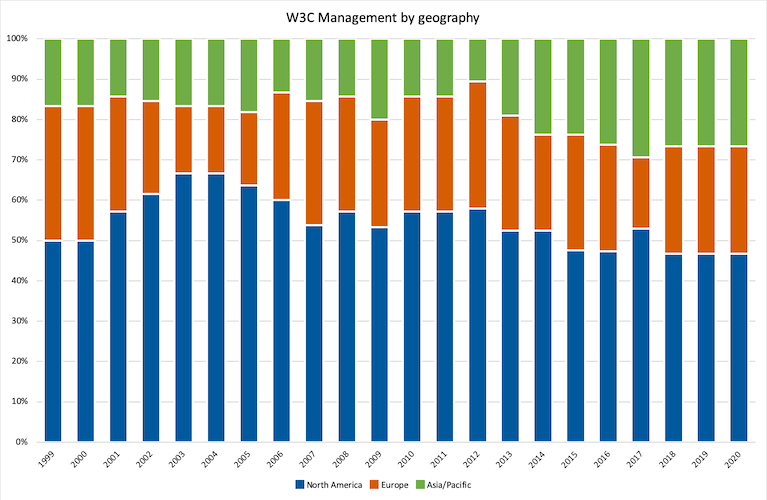 2 thoughts on “Diversity and Inclusion at W3C: 2020 update; future of the W3C Diversity Fund”