Diversity and Inclusion at W3C: 2022 figures

As part of our commitment and continued focus on diversity and inclusion here is the annual report for our most senior bodies.

Over a several year period we have substantially improved our geographic and gender diversity in these groups. But we still have much more to go. More broadly in the consortium we still have many under-represented groups.

As you can see in the graphs, since last year (and yearly since 2018) we continue to make incremental improvements.

The W3C Diversity bar charts and figures for 2022 are also available in a standalone public document.

Notes on the graphs and information collection: Because we do not collect participants’ data, to preserve privacy, it is difficult to gather data for different characterizations of diversity. We are able to focus on gender identity and geography for several of our representative bodies: W3C Advisory Board (AB), W3C Technical Architecture Group (TAG), W3C Management (W3M).

The W3C Advisory Board provides ongoing guidance to W3C on issues of strategy, management, legal matters, process, and conflict resolution. Created in March 1998, the AB has now for several years conducted its work in a public wiki. The elected Members of the Advisory Board participate as individual contributors and not as representatives of their organizations; the AB use their best judgment to find the best solutions for the Web, not just for any particular network, technology, vendor, or user.

The 11 Advisory Board positions are member-elected. The gender diversity of the AB has not changed this year. After the last election last month, the board has 4 women and 7 men for the fourth consecutive year. 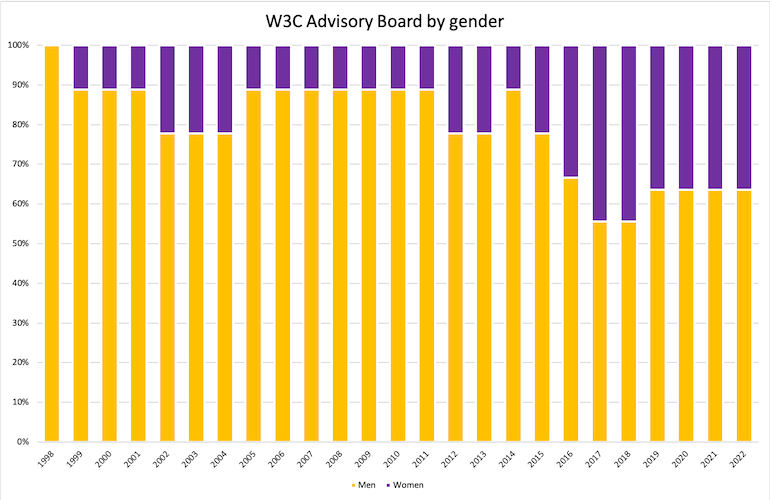 Looking at the Advisory Board by geography, we see that the geographical diversity which was heavily tilted toward North America between 1998 and 2009 steadily improved and reached in 2018 an equal number of participants in each region. The Asian representation has expanded without regressing since 2016 and this year it reached its highest number, surpassing the North American representation. The European representation which was more or less consistently about 1/5th since 2004 and peaked around 1/3rd in 2017 and 2018, has continued to shrink after this and has been at its lowest for the third year in a row. 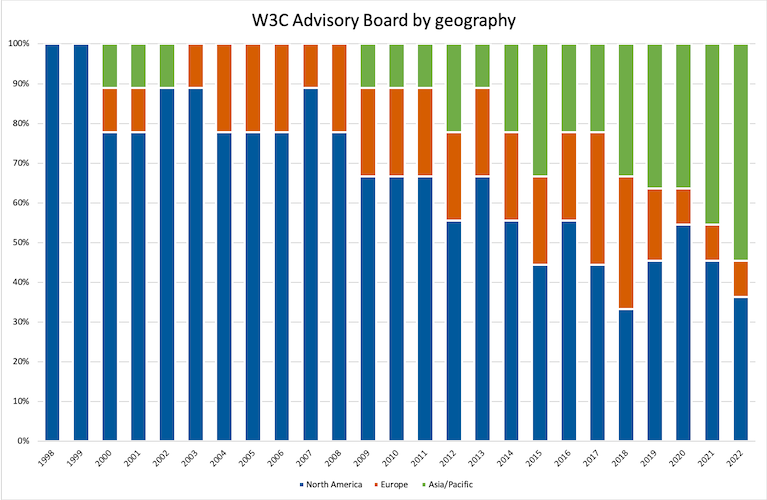 The 9 Technical Architecture Group positions are a mix of member election and appointment by the W3C Director. The group was composed only of men during its first nine years until 2011 when the TAG counted a woman during the next eight years except in 2015 where there were 2 of them. In 2019 and 2020, a third of the TAG were women. After the last election earlier this year, the composition of the TAG remained the same: a non-binary member, 3 women and 5 men. 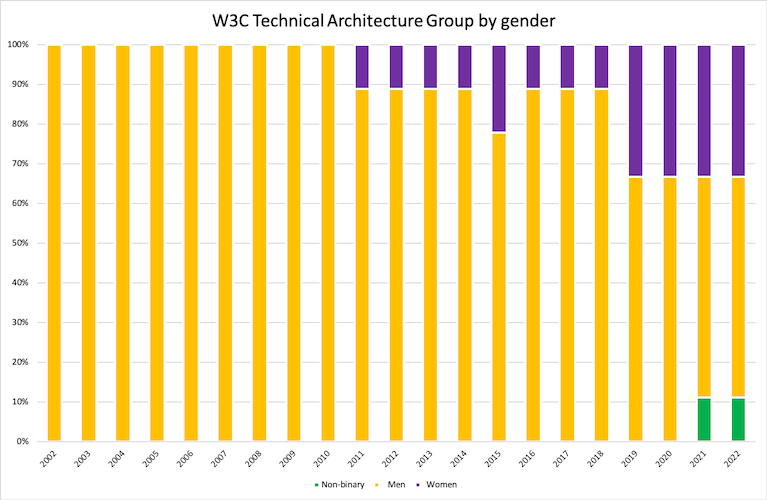 Looking at the TAG by geography, we returned to the same representation as in 2020: the North America contingent is the most represented again, followed by Europe, and Asia/Pacific. 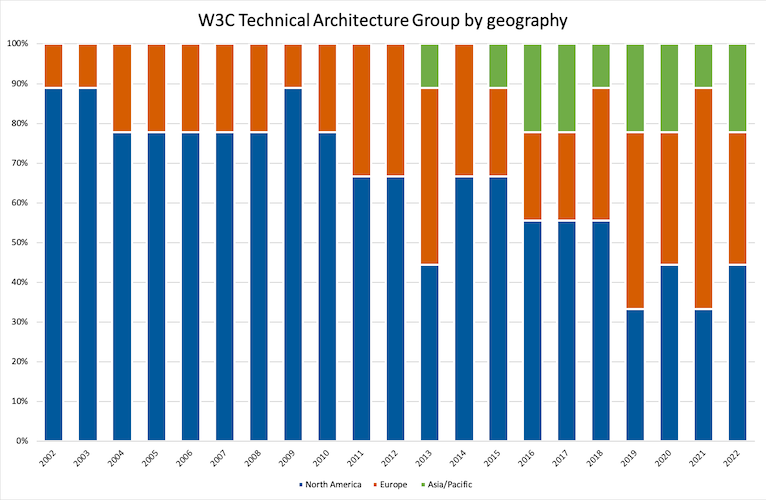 Note: The diagrams use percentages because the number of persons on W3M has changed over the years. 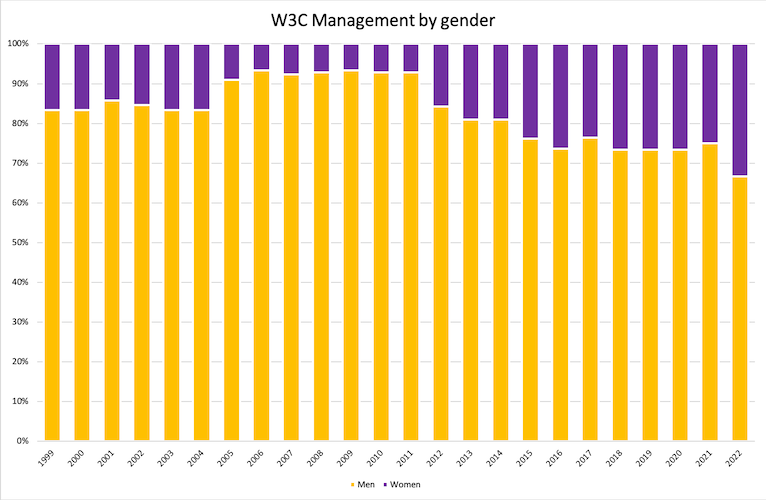 The geographical distribution in W3M is relatively good and has been trending steadily toward more balance since 2012. The Northern America contingent is still the most represented, but it is at its lowest and for the second year in a row. Asian representation which surpassed the European’s in 2021 has increased a bit. For the 5th year in a row, the European and Asian representatives amount to slightly over 50% of the W3C management. 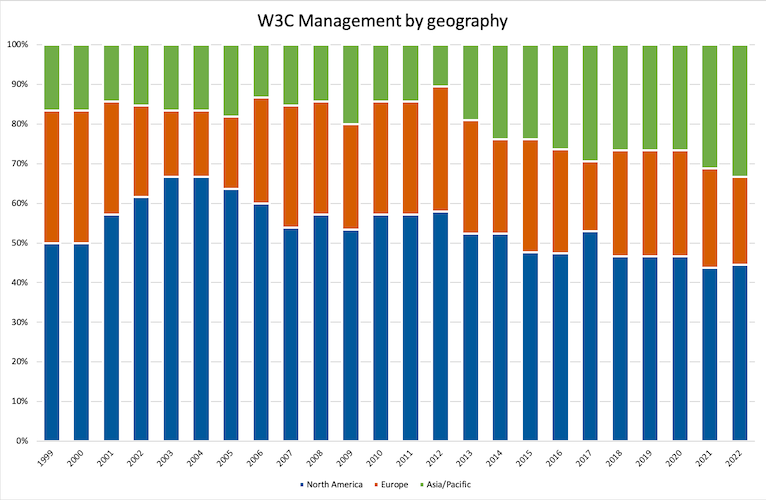