Welcome to the public AB Wiki 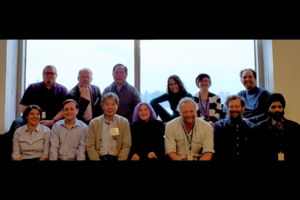 The W3C Advisory Board (AB) provides ongoing guidance to the W3C Team on issues of strategy, management, legal matters, process, and conflict resolution. This page documents current AB projects, and is open to suggestions from W3C members and non-members.

Find out more about being on the AB

Many of the critical W3C governance projects the Advisory Board is responsible for are conducted in the open, allowing other members of the W3C community (such as you?) to also participate. Consider the following sub-groups:

W3C process improvements are discussed in the community group:

The AB takes an active interest in improving W3C working group effectiveness by documenting and communicating existing good practices that help significantly, above and beyond formal processes, for everyone (especially chairs) participating in working groups.

The Positive Work Environment group maintains the W3C Code of Ethics and Professional Conduct and related procedures and practices.

Things to work on wiki-editing workflow for (Tantek, additional volunteers)

These attribution requirements are a good start for growing cultural conventions for attribution both inside W3C, and beyond W3C, towards a goal of making attribution founded in cultural norms rather than legal (copyright) requirements, potentially allowing for use of CC0 for contributions to W3C in the future.

The AB is working on (as is evident by this wiki page) doing more and more of its work in the open.

Nearly the entire AB has access and can post anything regarding AB-related matters. The methodology is to empower individual responsibility and trust by default, especially in such a small group. This method has worked well with the CSSWG (any CSSWG member may "have the keys" to @CSSWG) and it's been hugely successful in engaging the broader developer community.

The Advisory Board has been discussing acknowledging the individuals who have made great contributions for the Web community. And the Wiki page records some initial exploration in this direction.

The Advisory Board has established Chair Training as a priority for 2014. At TPAC2013, Chairs had a breakfast meeting and expressed what additional information and skills they required to improve their effectiveness. The W3C Team developed a list of areas which have now evolved into a quarterly Chair Training program.

Use of GitHub at W3C

The AB looks at use of GitHub at W3C specifically in terms of impacts on process and IP concerns.

Some W3C groups use use GitHub to develop specifications or edit non-normative documents. While the strategy for using Tracker and/or Bugzilla and/or GitHub is left to WG decision, there are some good practices that can be gathered. That section is pointing to effort to federate experiences and good practices.

The AB is looking at issues related to remote participation in W3C meetings.

The AB has discussed how to increase the use of OpenWeb Tools at W3C itself (a form of dogfooding). Many (most?) presentations at W3C workshops (e.g. the Workshop on Social Standards: The Future of Business) use non-open-web technologies/formats. W3C should work on good practices to encourage more use of OpenWeb Tools instead of, or at least before non-open-web technologies/formats.

In addition to the above some members of the AB work on additional side projects related to W3C process, culture, etc.

See AB/Priorities for links to past AB projects by year from 2013 to the present.