This public wiki was started in November 2013 as part of an AB objective to Encourage meeting participation.

This wiki complements the Guidebook section on IRC, and serves as a beginner's introduction to IRC for W3C Meetings.

Internet Relay Chat (IRC) is perhaps the most important tool used at W3C. Typically, everyone in a meeting is logged into the IRC channel for that meeting -- whether they are in a face-to-face meeting or virtual.

These pages seek to give participants a basic understanding of how to use IRC at W3C.

If that doesn't work, leave the channel field empty, and use "/join #ac mita" in the input field of the window after connecting.

How to say something

How to change something you said, after it has been posted

How to join more than one room 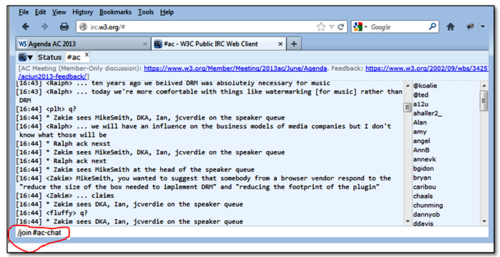 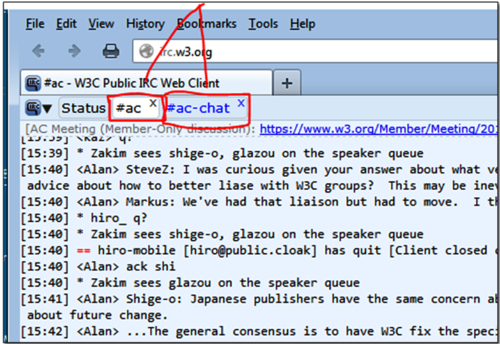 Putting yourself in the speaking queue

The W3C IRC system uses its own software robot, named 'Zakim', to manage the speakers' queue. This is very helpful during a meeting, to know whose turn it is to speak. (Zakim has other capabilities as well.) 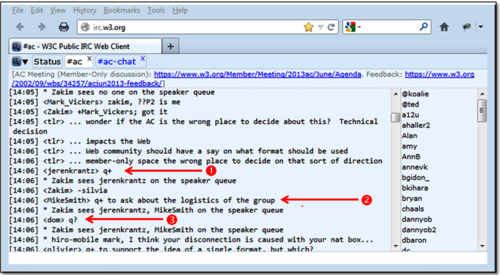 Removing yourself from the speaking queue

Occasionally one decides that he or she wants to drop off the speaking queue.

Out of band or off the record comments

W3C house style is to use what irc calls "action" messages to denote out-of-band or off-the-record comments. Most IRC clients have a command called /me that generates this type of message. Clients generally display these messages in a different style from normal messages. For example, the irc command "/me waves" might result in the discussion window showing the text "* AnnB waves". The RRSAgent logging tool should be present on the channel as well; the function of RRSAgent is to save the irc chat log into the web. RRSAgent excludes /me messages from the Web log and minutes.

When IRC is used to keep meeting minutes it is important to distinguish what was actually said in the meeting from side conversations that were not heard by all (i.e., on a teleconference). We encourage the use of square brackets around messages that are intended to be side comments for the log; e.g. "[AnnB agrees]".

IRC is a very important tool for participating in and keeping records of W3C meetings, as well as in the social community. Please join in!

For the history of irc itself, see the Wikipedia page.