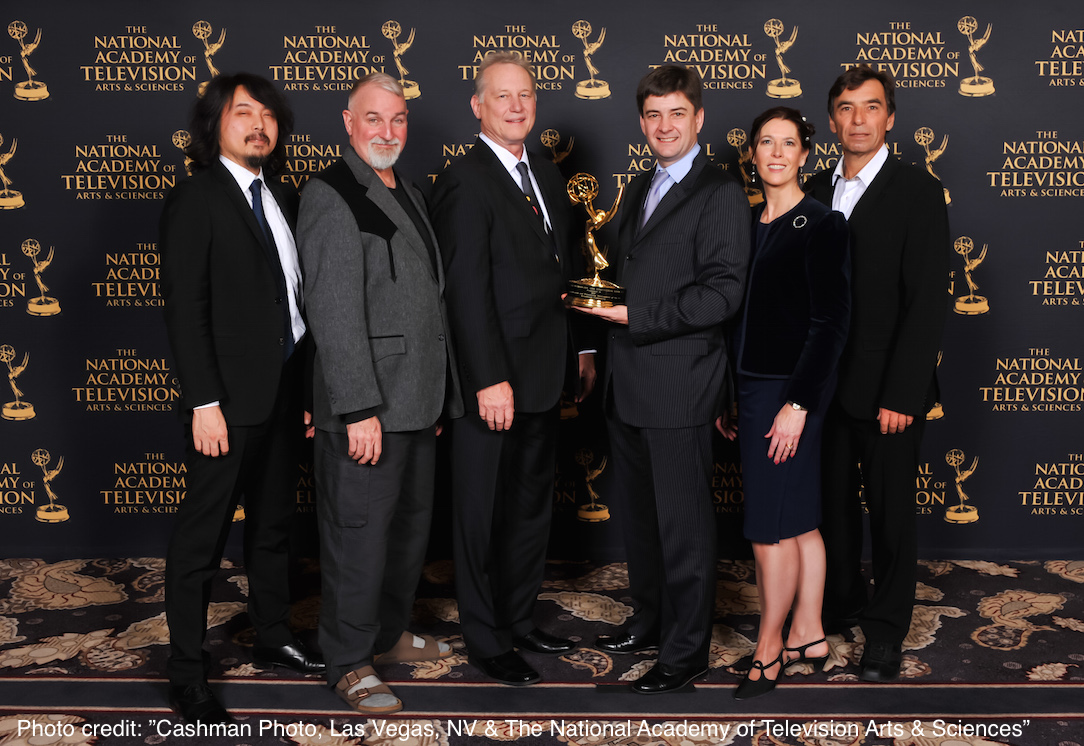 5 January 2016 — The World Wide Web Consortium (W3C), the global standards organization that develops the foundational technologies for the Web, will receive a Technology & Engineering Emmy ® Award on 8 January, 2016 from the National Academy of Television Arts & Sciences (NATAS) for W3C's work to make video content more accessible with text captioning and subtitles.

For the category “Standardization and Pioneering Development of Non-Live Broadband Captioning,” the Emmy ® Award recognizes W3C’s Timed Text Markup Language (TTML) standard that helps ensure that the needs of people with disabilities, particularly people who are deaf or hard of hearing, are addressed. The NATAS awards event will take place at the Bellagio Hotel in Las Vegas, Nevada. W3C representatives, including members of the W3C Timed Text Working Group, will accept the Emmy ® Award statue. In addition to W3C, other honorees in this category are Home Box Office (HBO), Netflix, Telestream, and the Society of Motion Picture and Television Engineers (SMPTE) who all use TTML.

“W3C is thrilled to receive a 2016 Emmy ® Award in recognition of technologies that support an important part of our mission to bring the full potential of the World Wide Web to everyone, whatever their disability, culture, language, device or network infrastructure,” said W3C CEO Dr. Jeff Jaffe. “I would like to thank the National Academy of Television Arts & Sciences for their recognition of W3C, and I congratulate the members of the W3C Timed Text Working Group and the W3C Web Accessibility Initiative on this outstanding achievement.”

Since its founding in 1994 by Web inventor Sir Tim Berners-Lee, W3C has been committed to the principles of an open, interoperable and accessible Web for everyone on any device. Producers of video content for the Web worldwide use W3C’s TTML to author captions and subtitles that make online videos accessible to millions of people. For people who are deaf or hard of hearing, text captioning enables them to understand the audio portion of video content. Subtitles provide language translations for international audiences of the audio in video content.

"Ensuring that all aspects of the Web are accessible to people with disabilities has been a priority focus of W3C and its Web Accessibility Initiative for nearly 20 years," said Judy Brewer, W3C Web Accessibility Initiative Director. “We are proud to see the Emmy ® Awards recognize the TTML standard for its ability to bring captioning and subtitles of video content to millions of Web users around the globe.”

In recent years with the convergence of traditional media and the Web, more video content from television is coming to the Web, and the Web is now running on televisions. TTML helps to bridge these worlds.

“Timed Text” is textual information that may be used directly as a distribution format for online captioning and subtitles, and as an interchange format among legacy distribution content formats. TTML is used for the purpose of authoring, transcoding and exchanging timed text information, and for delivering captions and subtitles to the Web, or more generally, the Internet. There is support of TTML in several players, including Web browser agents and authoring tools.

“TTML is a superset that encompasses preceding captioning approaches. It supports the semantics of most closed caption files, with the addition of metadata, and it is based on XML, a well-understood Web technology,” explained Philippe Le Hegaret, W3C Interaction Domain Lead and staff contact for the W3C Timed Text Working Group.

Since the publication of TTML 1.0, the W3C Timed Text Working Group (TTWG), currently co-chaired by Nigel Megitt (BBC) and David Singer (Apple) has continued to advance the capabilities for authoring and distribution of video captioning.

TTML Profiles for Internet Media Subtitles and Captions 1.0 (IMSC1), currently a Candidate Recommendation, is intended to simplify TTML implementation and authoring by bringing together popular TTML profiles in use in the industry, including EBU-TT-D. IMSC1 adds support for enhanced text padding, image subtitles and forced subtitles. The latter enables the common use case for including both captions for deaf and hard of hearing users, and translation of subtitles in a single document, allowing the user to choose whether to show just the translations, or both the translations and the captions. Pierre-Anthony Lemieux (supported by MovieLabs) is the editor of IMSC1.

TTML2 is the next version of TTML, published as a first public working draft in February 2015. In addition to the features introduced in IMSC1 and generally refining TTML1 features, it adds support for East Asian languages, enables stereoscopic 3D, and details the mapping to HTML and CSS. Glenn Adams (Skynav) is the editor of TTML2.

Increasingly, TTML usage is being adopted internationally. The European Broadcasting Union (EBU) uses EBU-TT based on TTML, and in Japan, the Association of Radio Industries and Businesses (ARIB) uses ARIM-TTML. The Society of Motion Picture and Television Engineers (SMPTE) uses TTML as the basis for SMPTE-TT (ST-2052-1) and plans to use IMSC1 for its Interoperable Master Format (ST 2067-2).

W3C technical and industry experts will be attending CES from 5 to 9 January at suite #310 in the Westgate hotel and are available by appointment for meetings to discuss W3C's work regarding TTML as well as many other standards activities W3C is doing in the Automotive, Digital Marketing, Digital Publishing, Entertainment, Web Payments, Web Security, and Web of Things areas. For appointments during CES, email: team-contact@w3.org. After 9 January, contact J. Alan Bird, W3C Global Business Development Leader at abird@w3.org.

The World Wide Web Consortium (W3C) is an international consortium where Member organizations, a full-time staff, and the public work together to develop Web standards. W3C primarily pursues its mission through the creation of Web standards and guidelines designed to ensure long-term growth and stewardship for the Web. Over 400 organizations are Members of the Consortium.

ARIB congratulates W3C to receive Emmy Award for standards work on accessible video captioning and subtitles. TTML1, developed by W3C, provides flexibility for the services using it, and applicable even for live broadcast programs. By incorporating TTML1 as the core technology to inherit its features, ARIB developed ARIB-TTML, a specification for captioning, subtitles and superimposed messages on broadcast programs, which is primarily intended to be used for UHDTV services. TTML1 is a clear evidence that shows collaborative result between W3C and broadcast industries.

On behalf of Benetech, a member of the World Wide Web Consortium (W3C), we would like to congratulate W3C for receiving a Technology and Engineering Emmy ® Award for Standards Work on Accessible Video Captioning and Subtitles. Benetech shares the W3C’s goal of ensuring that all aspects of the Web are accessible to people with disabilities. We applaud the W3C’s pioneering development of Timed Text Markup Language (TTML), and we will continue to support advancements in strong accessibility standards through the DIAGRAM Center and our leadership of the accessibility task force of the W3C Digital Publishing Interest Group. Please accept our sincere congratulations on this notable achievement.

It is nice to see that the impact of W3C timed text technology has gone far beyond the traditional Internet. When we started work on the standard, the principal community was the hearing impaired. By taking a broader approach, fundamental problems for TV broadcasting were also included. This is an important example of how solutions for one community can grow to meet world-wide needs. We congratulate W3C with the Emmy Award!

The W3C created a truly foundational standard with TTML1, which has been widely adopted in other specifications. Its subsequent work on IMSC1 and TTML2 gives the industry a common target for worldwide authoring and distribution of subtitles and captions, which greatly facilitates implementation and interoperability across borders.

Congratulations on winning a 2016 Technology & Engineering Emmy ® Award. We will pay tribute to the contribution of W3C to the development of Web technology which has been highly beneficial to society by connecting people and devices.