The Publishing Working Group, Business Group, and Interest Group met for a two-day face to face at the Adobe office in New York. People came from far and wide to glimpse the Naked Cowboy for the first (and hopefully last) time from this office overlooking Times Square. We had an excellent view of a giant screen advertising Despicable Me 3. We might hire some minions for scribing. In some ways, this was a farewell to the IG and a welcome to the WG and new members who come from the IDPF. We formally welcomed Bill McCoy as Publishing Champion. We took a few moments to say goodbye to our friend and colleague, Pierre Danet, who passed away a few weeks ago. We began the process of creating new specifications for digital books and other publications on the Web. EPUB has been very successful, but our goal is to make publications first-class citizens of the Web.

Some of you may not be that familiar with EPUB. What is EPUB? It’s the standard ebook delivery and distribution format created by the International Digital Publishing Forum, which recently combined with W3C. EPUB began in 1999 as the Open eBook Publication Structure and has gone through several iterations over the years. Notably, in 2011 The DAISY Consortium recommended EPUB 3 over their proprietary DTBook as the best choice for providing accessible books. The current version of the spec is available at https://www.w3.org/Submission/2017/02/.

We started the meeting with some information about how a W3C WG operates. Ivan Herman rolled out the PWG’s new website, and we introduced some newbies to IRC. The PWG has a three-year charter to allow for writing four recs, Web Publications, Portable Web Publications, EPUB 4, and DPUB-ARIA 2.0. We plan to publish FPWDs early, followed by frequent updates. We will incorporate testing into the spec development to ensure that the specs are implementable and can meet exit criteria. Likewise, we agreed to appoint ambassadors for each area of horizontal review. Avneesh Singh of DAISY will serve as Accessibility Ambassador. Leonard Rosenthol of Adobe will serve as Security Ambassador. Ivan Herman of W3C will be the Internationalization ambassador. Mateus Teixeira of Norton (the publisher not the anti-virus) is mulling over privacy, but he could use a co-ambassador. (Contact Tzviya if you want to know about the perks of being an ambassador.) As a WG within the W3C, we need to remember that we are not rebuilding the Web. We might be adding a few missing pieces. 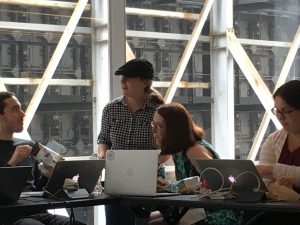 Leonard got us in a secure mood by offering an overview of security. His presentations are available at https://www.dropbox.com/s/ysghm63wknk3occ/Web%20Security-Intro.pdf?dl=0 and https://www.dropbox.com/s/dnztoypteq83xpt/PWP%20Security.pdf?dl=0. He stressed that security is all about trust. This can mean knowing the origin of a publication, not surprising the user, or preventing attacks.

Ric Wright of the Readium Foundation kicked off a great discussion about testing and the need to test ourselves as we go. We want to avoid the chicken and egg problems that existed with EPUB 3 of creating specs that no one implemented because no UAs (reading systems) supported them because no users implemented them. We are testing the specs for consistency and implementability before we get to the point of meeting exit criteria. Ric highlighted the need to perform not only granular tests but see what happens when features are combined and we face real-world scenarios.

There are documents (or, shall I say, publications?) that were produced by the Digital Publishing Interest Group that are considered input documents as we craft our magnificent specs. We offered an overview of these documents for the uninitiated. Web Publications and Portable Web Publications are documented at https://www.w3.org/TR/pwp/. The initial goal was similar to work done in the IDPF’s Browser Friendly Format, create a publication format that “just works” when you point a browser at it. A publication is not just a collection of documents, but there is a boundedness that must be represented, via metadata, linking, identification, addressing mechanisms, styling, and the ability to go offline. Garth Conboy of Google talked about the Packaging aspect of this. He provided some of the history of EPUB, its origins in multi-part MIME and its current state as a specialized zip. It is possible that the PWG packaging spec will be a very simple variation on work produced by Web Apps. It is possible that it will be far more complicated than that.

Matt Garrish of DAISY provided a summary of the work that the DPUB IG did with the ARIA WG on DPUB-ARIA 1.0 and where we can expect to go with DPUB-ARIA 2.0. It’s important to realize that ARIA is language agnostic, and this vocabulary can be used anywhere. The work on DPUB-ARIA 2.0 will be done by the PWG.

Dave Cramer of Hachette Book Group provided some background about his BFF experiments. The goal was to decrease the distance between EPUB and the Web. Dave built a JSON serialization of the EPUB manifest that also acts as navigation. Hadrien Gardeur of EDRLab took this idea to new extents, and it is now in use in the forthcoming Readium-2 (https://www.edrlab.org/public/slides/w3c/r2-webpub). 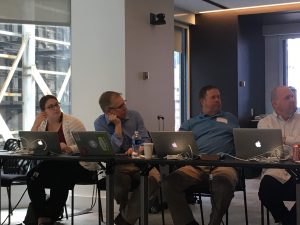 Laurent LeMeur of EDRLab further explained the work at Readium, outlining the tools called Streamer and Navigator that stream EPUB 2, 3, cbz, and (in the future) PWP, and EPUB 4.

Romain Deltour of DAISY offered an overview of Web App Manifest. From my perspective, the most important points are that this spec reproduces the functionality of native apps, provides a URL mechanism, and is extensible.

Leonard Rosenthol presented a detailed overview of the ongoing work on Packaging on the Web by the Google Chrome team. Since this work is ongoing at W3C, our group will have to consider whether this packaging method meets our needs for packaging, distributions, and archiving. Bill McCoy informed the group that the document will be split into to two parts, with the parts about format and signing being offered to IETF and the part about browser behavior staying with W3C.

Google’s Brady Duga gave us a two-sentence definition of Service Workers, which would allow web publications to work offline as well as online. Service Workers are scripts that mediate between users and the server. For example, if you click a link for chapter two of a book, the service worker would recognize that you aren’t online and give you chapter two from a local cache. We don’t yet know if service workers will be formal part of our specs or an implementation mechanism.

Avneesh Singh of DAISY, newly appointed Accessibility Ambassador, spoke about plans to work with the APA and WCAG WGs to add success criteria to WCAG and work on Media Overlays in the mainstream. EPUB relies on the largely ignored SMIL specification to sync audio and text files, which is helpful to all readers, but especially those who require accessible publications. We need to find a solution that works in browsers.

We have an aggressive timeline to publish several documents. We began to draft a rough outline and appoint editors for different sections. Matt Garrish, famous for editing all-things-EPUB, will be the editor of the WP document. We created a rough outline, and Matt has already begun a draft. We plan to work in task forces and have already begun conversations on GitHub about manifests and navigation. The PWG will not take a summer hiatus, because there is a lot of work to do.

Who owns those docs?

Rick Johnson of VitalSource, and co-chair of the Publishing Business Group, asked the group to review the documents listed at http://idpf.org/ongoing. The Publishing Activity has inherited responsibility for these documents, and now we must assess which organization takes ownership.

It was a packed schedule, and it’s clear that we have a lot of work to do. Thanks everyone for traveling and participating. We look forward to your contributions!

For more details on these discussions, see the meeting minutes: Day 1 and Day 2.

6 thoughts on “Bringing Publications to the Web: First Steps”