25 years ago the world changed forever

If you grew up thinking that the Web always existed since you were born, you may be right. If not, you may remember the very early days of the Web.

Two years ago we celebrated  the invention of the Web on the anniversary of the March 1989 memo written by Tim Berners-Lee outlining his proposal for the World Wide Web.  On Saturday we celebrate not only the brilliance of the Web’s conception but the world-changing point at which the Web was offered as a publicly available service.

25 years ago, on 6 August 1991, Tim Berners-Lee, posted information about the WorldWideWeb project on the newsgroup (like a message board) alt.hypertext and invited wide collaboration – marking,  in one email, the Web’s introduction to the wider world.

Even at the start of his work on the Web Tim offered it to everyone, opening it for contribution from all. Because so many around the globe have taken him up on his offer and have helped to develop the Web, to create and share content as well as to build standards to keep it interoperable and innovative, the Web has become not just a repository for knowledge and sharing beyond the dreams of any library, but one of the most unique and powerful tools in history.

“With the Web we are trying to encapsulate all that civilization needs.  As needs and opportunities arise and new technologies facilitate addressing those needs, W3C focuses on improving the Web technology base.  We need everyone’s engagement to ensure that we are addressing the most important problems in the best way.”

The Web has changed all our lives and we are pleased to celebrate the historical occasion of its release to the public 25 years ago.  At W3C we continue to uphold our core values of openness, collaboration and innovation in our standards while we pursue our mission  of leading the Web to its full potential.

Thank you Tim and thanks to all who have, by their efforts, helped to create the Web  – from its earliest beginnings, to its inestimable impact on our lives now and for all the exciting ways it will continue to evolve in the future.

We  are grateful for all of those who have made the Web what it is now:  for our W3C Members; for Web developers and all Web users;  for those who work to make sure the Web is truly worldwide and for all of humanity; and for those who are working to create what the Web will become.

We invite you to tell us in the comments about when you first came across the Web, your first Web site, the first W3C spec you implemented  or however the Web has positively impacted you.

For those interested in the early history of the Web:

In March 1989, while at CERN, the European particle physics lab, Tim Berners-Lee wrote: “Information Management: A Proposal”  outlining his ideas for the Web as a global hypertext information-sharing space.  In September of 1990, Mike Sendall, Tim’s boss, gave him approval to go ahead and write the global hypertext system he described and allowed purchase of a NeXT cube computer to use to do so.

In October 1990 Tim wrote the first Web browser – or more specifically, a browser-editor -which was called WorldWideWeb.  When it was written in 1990 it was the only way to see the Web. Later this  browser-editor was renamed Nexus in order to save confusion between the program and the abstract information space (which is now spelled with spaces as: World Wide Web).

An early color screenshot of the WorldWideWeb browser 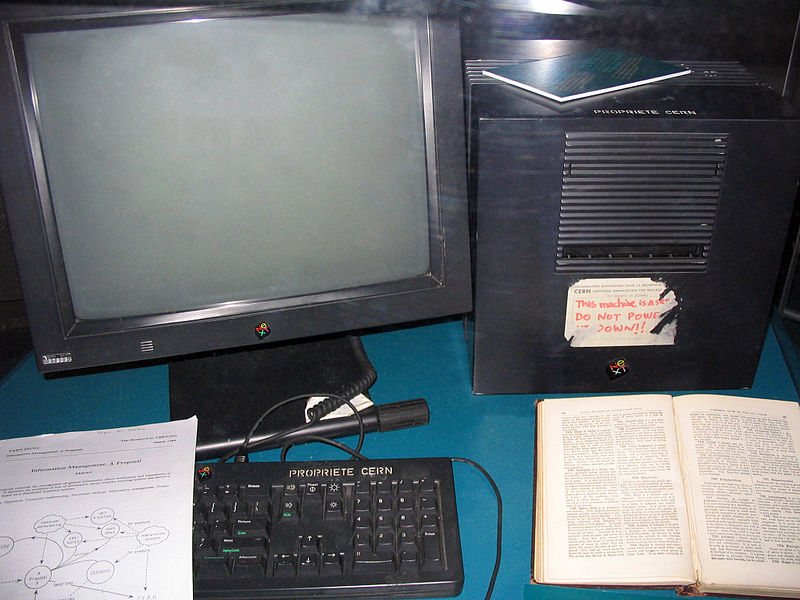 The NeXT workstation used by Tim Berners-Lee to design the World Wide Web and the first Web server; a copy of “Information Management: A Proposal”; and a copy of the book “Enquire Within upon Everything”.

Later in October 1991, Robert Cailliau, a colleague of Tim’s at CERN, joined the project and helped rewrite and circulate Tim’s proposal for the Web. In November 1991, Nicola Pellow, then a student, joined the team and wrote the original line-mode browser. Bernd Pollermann also joined the team that month and worked the “XFIND” indexes on the CERNVM node. By Christmas of that year the line mode browser and WorldWideWeb browser/editor was demonstrable and access was possible to hypertext files, CERNVM “FIND”, and Internet news articles.

(Note: in 2013 CERN re-released an online version of the line-mode browser.  You can see that here: http://line-mode.cern.ch/)

In 1991 presentations and seminars were made within CERN and the code was released on central CERN machines. Then on 6 August 1991, files were made available on the Internet by FTP —  and posted, along with Tim’s email introducing the public to the WorldWideWeb — on the alt.hypertext newsgroup mailing list. (That new users accessed the Web after 23 August is why that date is considered “internaut’s”  day).

In the autumn of 1991, Stanford Linear Accelerator Center (SLAC) Physicist Paul Kunz met with Tim Berners-Lee and brought word of the Web back to SLAC. By December, the first WWW server at SLAC (and first server outside of Europe) was successfully installed.  In the years that followed more browsers were developed, more Web servers were put online and more Web sites were created. The Web as we know it had begun.  In November 1993, at a Newcastle, U.K. conference, Tim Berners-Lee discussed the future of the Web with MIT’s David Gifford, who suggests that Tim contact Michael Dertouzos, the head of the Laboratory for Computer Science at MIT.

By 1994, load on the first Web server (info.cern.ch) was 1000 times what it had been 3 years earlier. In February 1994 Tim met with Michael Dertouzos in Zurich to discuss the possibility of starting a new organization at MIT and in April of that year,  Alan Kotok, then at DEC and later Associate Chairman of W3C, visited CERN to discuss creation of a Consortium. In October of that year the World Wide Web Consortium (W3C), the Web standards organization, was started at MIT, as an international body.  In April 1995 INRIA became the W3C Host in France (in 2003 it was changed to ERCIM); in September 1996 Keio University became the W3C Host in Japan and in January 2013 Beihang University became the  W3C host in China.

35 thoughts on “25 years ago the world changed forever”