In 2000 – the height of the dotcom boom and bust – a small startup in Australia embarked on a journey to build the next generation digital book store (ebooks back then) and promote an open ecosystem for the trading of digital assets. They formed the Open Digital Rights Language (ODRL) Initiative and quickly assembled like-minded organisations to promote ODRL as an open, interoperable industry standard for licence expression.

The Open Digital Rights Language (ODRL) is a policy expression language that provides a flexible and interoperable information model, vocabulary, and encoding mechanisms for representing statements about the usage of content and services. ODRL describes the underlying concepts, entities, relationships, and terms, that form the foundational basis for the semantics of ODRL policies. Policies are used to represent permitted and prohibited actions over a certain asset, as well as the agreed obligations required to be met by parties. In addition, policies may be limited by constraints (e.g., temporal or spatial constraints), and duties (e.g. payments) may be imposed on permissions.

In 2001, W3C held a Workshop on Digital Rights Management for the Web at which ODRL first floated the idea of forming a Working Group to take the language through the W3C recommendation track, but a Member Submission was the primary outcome.

Years pass by, but the ODRL Initiative still continues its work, promoting the language to standards groups and sectors interested in machine-readable rights. The Open Mobile Alliance was the first standards group to adopt the language for mobile media and numerous groups in the publishing industry and education followed. A new major version was also drafted to also support multiple encodings.

More years pass, and the ODRL Initiative becomes one of the first groups to take up the new W3C Community Group program and becomes the ODRL Community Group (CG) in 2011. The ODRL CG finalises the major new version of the ODRL specifications which now take a broader business view by supporting more generic policies to cover additional industry requirements. The International Press Telecommunications Council  (IPTC) becomes one of ODRL’s industry partners on the journey.

Finally in 2016, after some “will they, won’t they” moments, W3C charters the Permissions & Obligations Expression (POE) Working Group to take the current work of the ODRL CG and gain more industry consensus and semantic improvements with revised specifications. The POE WG worked diligently on their charter and has now delivered the final W3C Recommendations:

The ODRL version 2.2 recommendations include major additions, such as supporting prohibitions and additional duties for obligations, remedies, and consequences of policy usage. Parties and assets now support collections of items, and constraints can now explicitly refine actions and support logical relationships. Semantically, ODRL is now fully based on an RDF ontology and the vocabulary terms updated to meet new use cases. ODRL Profiles – the extensions by communities – has now been greatly improved and is the primary way industry sectors will exchange policies.

The figure below shows the relationship between the key entities of the ODRL Information Model: 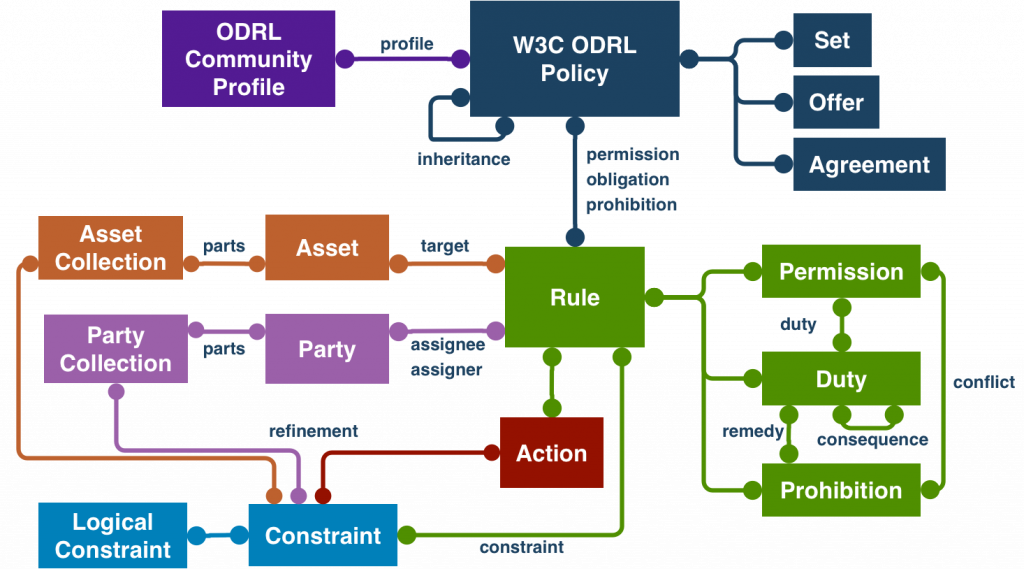 The timing of the ODRL recommendation has been fortuitous, as we see so many new opportunities ahead. With the W3C merger with the International Digital Publishing Forum (IDPF) – the organisation that specified the ebook standards – ODRL now can collaborate more closely with the original driver of the language to further address the publishing industry needs.

The European General Data Protection Regulation (GDPR) poses huge challenges for machine-interpretable privacy statements. W3C is hosting an upcoming workshop on Data Privacy Controls and Vocabularies with ODRL Profiles as a topic for modeling personal data and rules in this context.

Using ODRL to express common licenses will provide a popular way for users to instantly express machine-readable licenses. Examples of licenses are the GNU General Public License, the Creative Commons licenses, and the UK Open Government Licenses. ODRL will represent the text license as semantics statements that will also address license compatibility for derivations based on the reuse of multiple digital assets licensed under different terms.

We cannot write a blog post today without mentioning Blockchain. Specifically the euphoria around “smart contracts”. This could be one of the greatest impacts that ODRL could achieve. Currently “Smart contracts” are non-interoperable programming languages that do not support any contract models, nor are semantically-based. ODRL can fill this void by providing a robust, policy-based, business-agreement model to capture the business semantics. There has already keen interest in using ODRL from the Dot Blockchain Media group, and more recently, KodakONE.

After two years, business-as-usual work now returns back to the ODRL Community Group, and they now plan to:

It has been a long 18-year journey for some. Every path, every unexpected turn, has been rewarding. As we now savour the final outcomes, we also look forward to the next journey for ODRL.