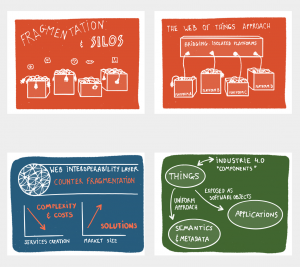 Two weeks ago I had the pleasure to present our vision of the future of the Internet of Things at the Industry of Things World USA conference in San Diego.

Here in a nutshell is what I told them:

Conference chairman Jeremy Geelan had started the conference with a retrospective. It took 27 years from J. C. R. Licklider’s vision of a worldwide computer network until Tim Berners-Lee’s invention of the Web became the spark to make this network broadly useful.

I then said that history could repeat itself with this next driver on the Internet, the Internet of Things (IoT). That is, unless we have a model which makes broad sharing available for IOT, we are liable to delay progress for years or decades. Specifically, today’s architectures and initial implementations tend to be silo-ed. There are standards at the physical layer but insufficient interoperability at the higher layers.

For example, a person’s watch (as an IoT device) will want to participate in IoT wearable applications (since it is worn), IoT medical applications (as it takes one’s pulse and links into personal medical information), IoT Smart Homes (used to control the home), IoT Smart Cities (as the municipal infrastructure relies on data about weather and traffic), and IoT Smart Factories (to track its usage and condition). But to participate across all silos, and for applications to be built which leverage all silos requires common data models, metadata, and an interoperable layered model.

From this I introduced the Web of Things model and Interest Group. This complements IoT by providing a higher level interoperability layer above IoT. Through the work W3C is doing in our task forces, we are addressing interoperability related issues: thing descriptions, API and Protocol bindings, discovery and provisioning, and security.

I spoke to several stakeholders: thing manufacturers, developers, solution providers who all seemed to agree that interoperability needed a greater level of attention in IoT.