It seems not very clear for many people. So let’s set the record straight. HTML 5 can be written in html and XML.

HTML 5 specification is the description of a vocabulary that you can write in two different syntaxes (html and XML) depending on your developer needs, markets and applications. The precedent versions of the HTML vocabulary (HTML+, HTML 2.0, HTML 3.2) were written using SGML syntax rules. HTML 4 had already two syntaxes: SGML (called HTML 4.01) and XML (called XHTML 1.0).

HTML 5 is being written in two syntaxes: html and XML. Because SGML has never been deployed in browsers and many html authoring tools, HTML 5 defines a new serialization called html, which looks a lot like the previous known SGML. 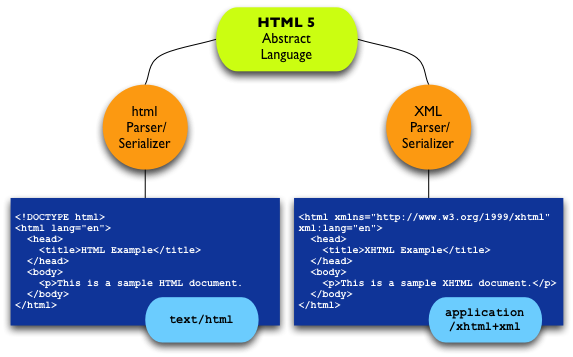 kudos to James Graham for the graphics idea.