Yesterday, as part of the W3C Technical Plenary day, I got the opportunity to introduce a new tool that I had been working on over the past few weeks, the W3C Cheatsheet for Web developers. 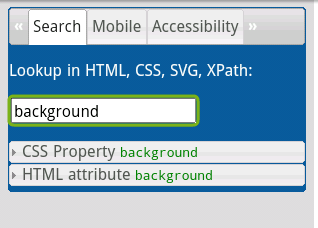 This cheatsheet aims at providing in a very compact and mobile-friendly format a compilation of useful knowledge extracted from W3C specifications — at this time, CSS, HTML, SVG and XPath —, completed by summaries of guidelines developed at W3C, in particular the WCAG2 accessibility guidelines, the Mobile Web Best Practices, and a number of internationalization tips.

Its main feature is a lookup search box, where one can start typing a keyword and get a list of matching properties/elements/attributes/functions in the above-mentioned specifications, and further details on those when selecting the one of interest.

The early feedback received both from TPAC participants after the demo and from the microblogging community has been really positive and makes me optimistic that this tool is filling a useful role.

This is very much a first release, and there are many aspects that will likely need improvements over time, in particular:

The code behind the cheatsheet is already publicly available, and I’m hoping others will be interested to join me in developing this tool — I’m fully aware that the first thing that will need to get others involved will be some documentation on the architecture and data formats used in the cheatsheet, and I’m thus hoping to work on that in the upcoming few weeks.

In the meantime, I very much welcome bug reports and suggestions for improvements, either by private email to me (dom@w3.org) or preferably to the publicly archived mailing list public-qa-dev@w3.org.

22 thoughts on “W3C Cheatsheet for developers”