Professor Pedro Domingos in his book entitled “The Master Algorithm: How the Quest for the Ultimate Learning Machine Will Remake Our World” addressed a question how to build the master algorithm by combining different schools of thought for machine learning. According to Domingos, the quest starts with a combination of best practices developed by Symbolists, Connectionists, Evolutionaries,  Bayesians and Analogizers. The book provides insights into methods for each school of thought, their development history and relationships between the schools.

From W3C-KiSS community group perspective, understanding of those schools and how these can complement each other can be an important mission to build knowledge-driven systems.

In fact, the knowledge itself can be seen having various representation languages if one takes different viewpoint based on the school of thought. The figure below suggests a refined view on the five – symbolists, connectionists, statisticians, evolutionaries and interactionists. 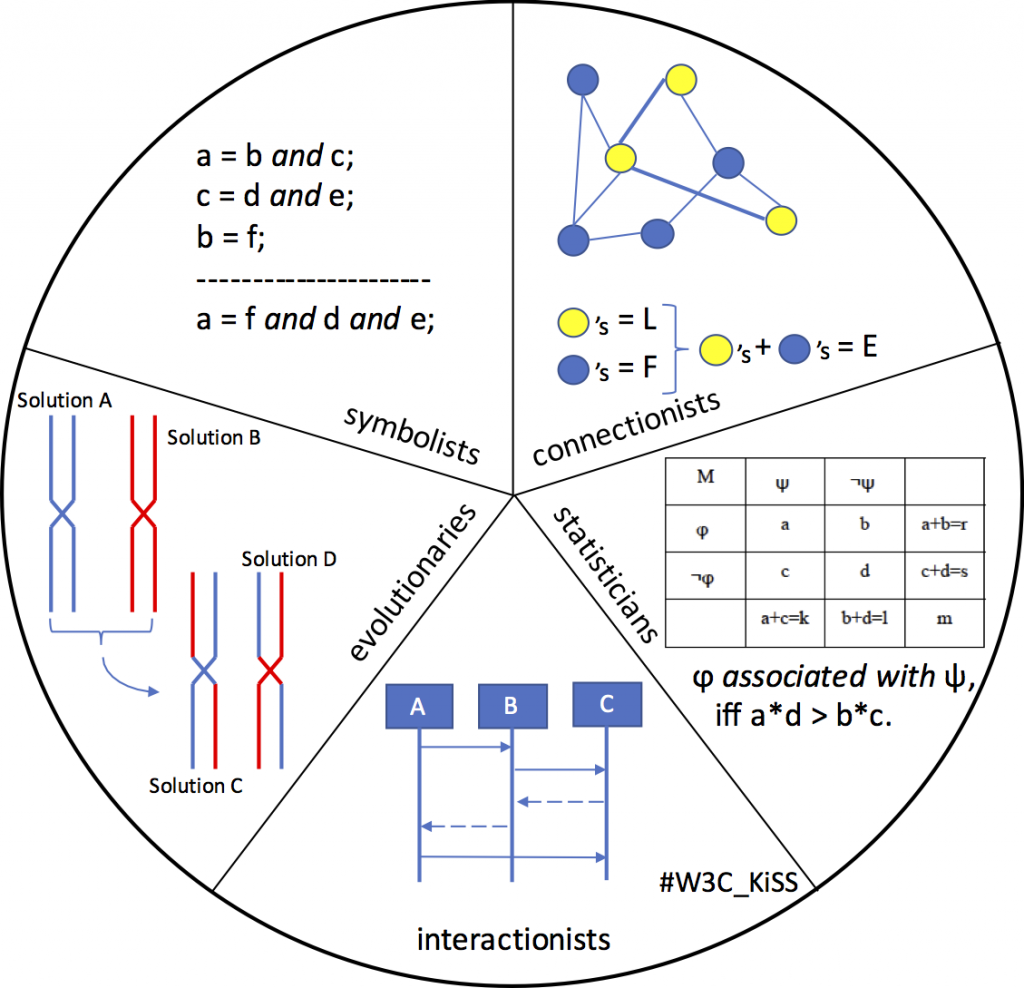 As one builds the knowledge-driven system, the knowledge can be expressed using Web Ontology Language (OWL), which can be attributed to the symbolists. In general, each concrete node in the RDF graph is a concept that may be linked to other concepts-nodes on the graph. The reasoning for such structures can be seen just as a manipulation of symbols to derive new possible combination, which may not be stated explicitly in the beginning. This new combination can be seen a new knowledge we have got after the manipulation of symbols. Though, it is also important that the combination would have also some practical meaning from the application viewpoint.

Connectionists see a concept manifesting itself not as a particular node in a graph, but rather as a collection of engaged nodes or simultaneously activated connections between the nodes. As for the analogy, neural networks can be mentioned. However, also connectionistic grid approach was developed and demonstrated with a control application for a production line. In those cases, a concept can be seen as a simultaneous activation of the nodes that can make one to speak about active patterns. The reasoning process can be seen as a sequence of changing patterns that can sometimes arrive to the “new” knowledge, e.g. a new pattern for which the system would develop (train) new useful behaviour.

Knowledge of statisticians in comparison to symbolists (symbols/nodes) and connectionists (connections/patterns) can be seen in populations. Yet another word, but it highlights some important differences, as concepts for statisticians can be seen emerging as a result of processing all (or large amount) of nodes for the population and the properties attributed to the individuals. The relationship between the properties can be derived depending on how many nodes in the population share same properties (at the same time).

One of the aims that in our context can be attributed to evolutionaries is to allow systems adapting dynamically, at run time to the changes in the environment. Learning from the nature, the vocabulary of evolutionaries may include such things as “chromosomes” to represent their knowledge. The nature gave us the method what to do with such representation. For example, a chromosome could be a production schedule – a list of workstations a product must visit at the production line to get assembled.   Crossing over between a number of chromosomes / solutions can bring us to an optimal schedule. Mutations can increase our chances to find actual optimum rather than staying in some local optimum.

Interactions between the nodes, the particular patters for the interactions could be seen as one of the main focuses for the interactionists. The knowledge of a system in this case could be embedded, for example, into Multi Agent System (MAS), where an agent can be seen as autonomous entity capable of complex interaction behaviour. The MAS can be solving dynamically problems occurring, for instance, at the production line having to decide the flow of a workpiece in the production system.

As can be seen, each school of thought, or approaches to build knowledge-driven systems may propose own vocabulary, languages, tools and methods to build corresponding solutions. An open question could be, if the World Wide Web Consortium can be one of the prominent actors for providing the languages (standards) to support all the approaches and to help developing knowledge-driven systems managing different vocabularies?