Important note: This Wiki page is edited by participants of the AGWG. It does not necessarily represent consensus and it may have incorrect information or information that is not supported by other Working Group participants, WAI, or W3C. It may also have some very useful information.

The visual presentation of graphical objects that are essential for understanding the content or functionality have a contrast ratio of at least 4.5:1 against the adjacent color(s), except for the following:

essential
WCAG 2.0's definition of essential
graphical object
A graphic or section of a graphic that represents a distinct object or sub-component with semantic meaning. It may be a component of a larger structured graphic such as a chart or map. There is a related concept in the ARIA graphics module for graphics with a document structure, but this applies to bitmap and vector graphics, or visual objects within them.
CSS Pixels
The browser-calculated value of pixels, which may be different from the physical device pixels. Browsers set the measure of 1px in CSS as closely as possible to that of the reference pixel, which takes into account the assumed viewing distance. For example, 1px on a TV display at 3.5m away is much larger than 1px on a phone 30cm feet away. The CSS pixels on a high-resolution screen create text and objects that are the same size as a low-resolution screen if they both use CSS pixels.

What Principle and Guideline the SC falls within.

The intent of this success criterion is to apply the contrast requirements to important graphical elements in a similar way that it is applied to text in 1.4.3 Contrast (Minimum).

If a graphic is needed to understand the content or functionality of the webpage then it should be perceivable for people with low vision or other impairments.

The term "graphical object" is intended to apply to stand-alone icons such as a print icon (with no text), and the important parts of a more complex diagram such as each line in a graph. Not every graphical object needs to have sufficient contrast with its surroundings, only those that are required to understand what the graphic is conveying.

The term essential information is used as many graphics do not need to meet the contrast requirements. If a person needs to perceive a graphic, or part of a graphic (a graphical object) in order to understand the content it should have sufficient contrast. That is not a requirement for:

For designers developing icons that need to be perceived clearly, the following is an example of several sizes of icon having sufficient contrast at different sizes. 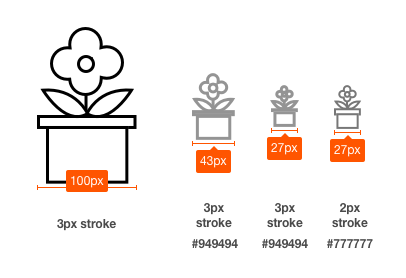 alt="Icon shown at 100px wide down to quite a small version."

The intent of this Success Criterion is to provide enough contrast for graphics that convey important information so they can be perceived by people with moderately low vision.

People with low vision often have difficulty perceiving graphics that have insufficient contrast. This can be exacerbated if the person has a color vision deficiency that lowers the contrast even further. Providing a relative luminance (lightness) difference of 4.5:1 or greater can make these items more distinguishable when the person does not see a full range of colors and does not use assistive technology.

Pie charts make a good case study for this success criteria, the following pie charts are intended to convey the proportion of market share each browser has. NB: The actual figures are made up, these are not actual market shares.

Fail: The following pie chart has labels for each slice (so passes 1.4.1 Use of Color), but in order to understand the proportions of the slices you must discern the edges of the slices (the graphical objects conveying essential information), and the contrast between the slices is not over 3:1. 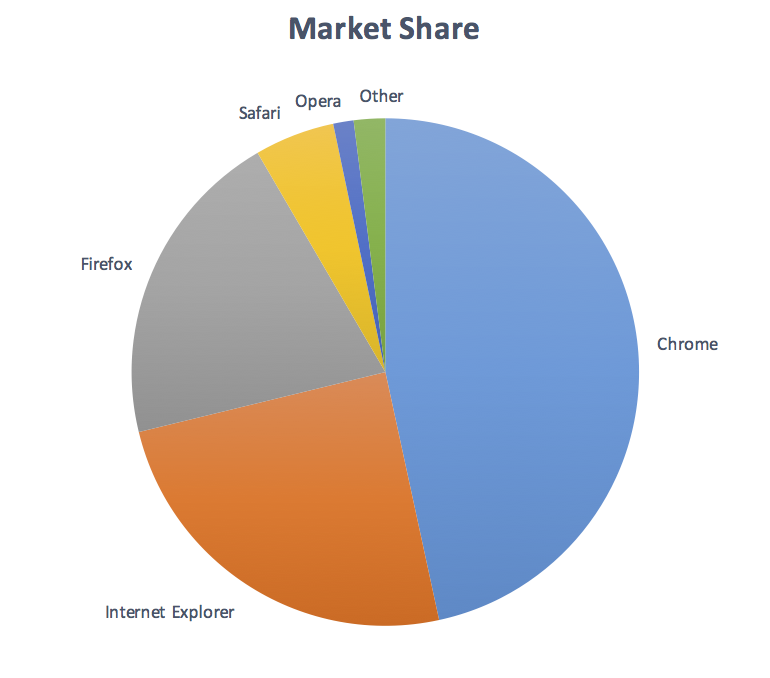 Not applicable: The following pie chart has visible labels and values that convey equivalent information to the graphical objects (the pie slices): 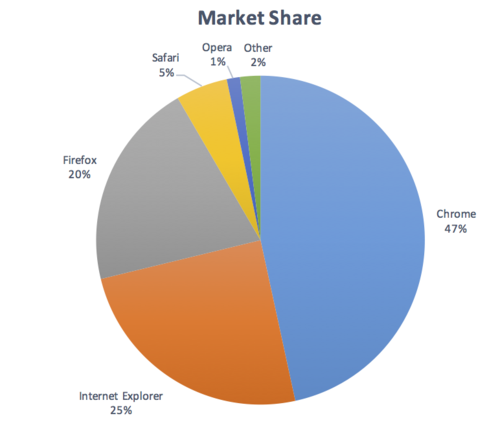 Pass: The following pie chart has visible labels, and sufficient contrast around and between the slices of the pie chart (the graphical objects): 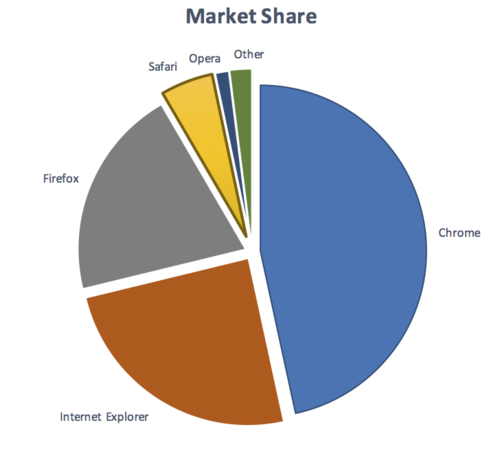 Note that on the last example, the spaces between the small slices is less than 3px wide, therefore those slices need a 4.5:1 contrast ratio against the white background.

Many other examples have been worked through on different graphic types.

Notes on how the contrast and thickness were derived

The contrast levels are transferred directly from the current 1.4.3 Contrast (Minimum).

The size of 3px for 'thicker' was selected as it aligns with the large-text requirement of 1.4.3 Contrast (Minimum).

The following images show 24px (large) text, and a zoomed in view of a 24px word to show the pixels that make it up. The "i" character is 3 pixels wide. 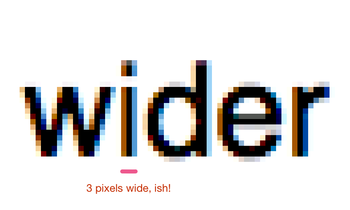 For each graphic that conveys important information: