2015 is to shaping up be the year that standards for reading and writing, and the web in general, start to be put together into, next generation, systems and applications.  Quite a comprehensive review post, contains much of what is being looked forward to.

The Spatial Data on the Web working group was announced and the EU funded Aligned project also kicked off.

Congratulations to the Linked Data Platform working group, who achieved REC status this quarter, after several years of hard work.  Having spent most of the last three month testing various implementations, I’m happy to say it has greatly exceeded my already high expectations.

A number of read write web standards and apps were demoed at the W3C Social Web Working group F2F, hosted by MIT.  This seems to have gone quite well and resulted in the coining of a new term “SoLiD” — Social Linked Data!  Apps based on the Linked Data Platform have been considered as part of the work of this group.

A relatively quiet quarter in the community group, tho still around 60 posts on our mailing list.  There is much interest on the next round of work that will be done with the LDP working group.  Some work has been done on login and signup web components for WebID, websockets and a relaunch of WebIDRealm. 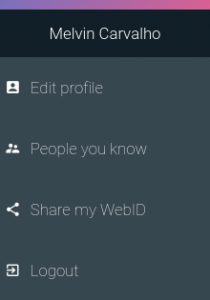 Lots of activity on the apps front.  Personally I’ve been working using GOLD, but for also announced was the release of Virtuoso 7.2 for those that like a feature rich enterprise solution.

Making use of the experimental pub sub work with websockets, I’ve started to work on a chat application.  A profile reader and editor allows you to create and change your profile.  I’ve continued to work on a decentralized virtual wallet and props goes out to timbl who in his vanishingly small amounts of spare time has been working on a scheduler app. 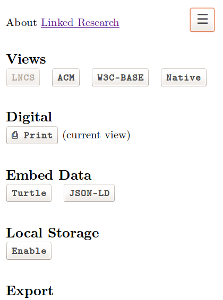 For those of you that like the web, like documentation, like specs and like academic papers, all four have been wrapped into one neat package with the announcement of linked open research.  It’s a great way to document work and create templates for upstream delivery.  Hover over the menu in the top right and see many more options.  I’m looking forward to using this to try to bridge the gap between the worlds of documentation, the web, and research.