UPDATE: this is a fake, as pointed out by David Kendal. 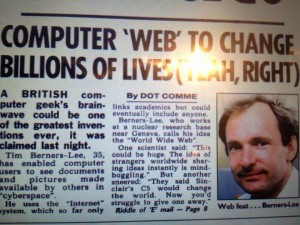 How The Sun reported the invention of the #Internet, back in 1992… Blimey! pic.twitter.com/YhXpA7n5Cg

One Response to [fake] “Computer ‘Web’ To Change Billions of Live (yeah, right)”