This is a project page for work on Semantic Web ontologies for FDA Therapeutic Areas.

This document uses some CSS styles to highlight frequently-searched text:

A principal goal of modeling clinical trial submissions in RDF is to leverage RDF's decentralized extensibility model based on globally-unique unambiguous identifiers for concepts and value sets. Sharing terms between submissions is a necessary component to enabling pooling of trial data. Distributed development of TAs hinges on discoverability of terms. To that end, TA-specific ontologies are broken down into: 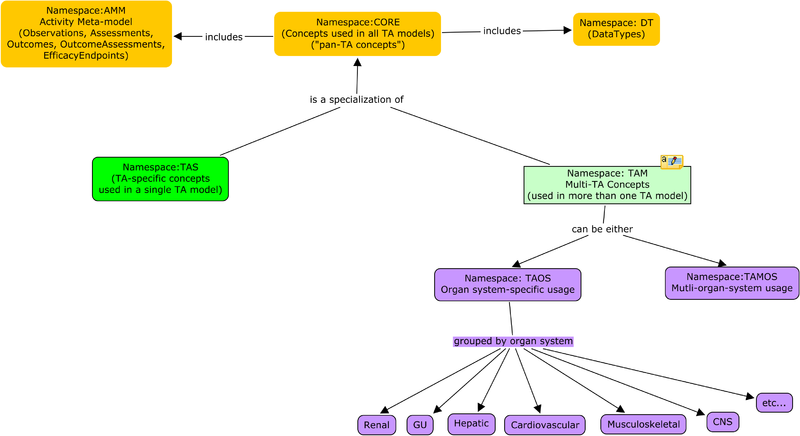 OWL is designed to help one map ontologies where possible. One situation in which it is especially easy to map ontologies is when one has evolved from the other. This arises when changes in scientific understanding or clinical practice require changes to the model. We can break these changes down into those where the new model includes but refines the old model and those where there is a fundamental change to the data captured.

When research reveals useful stratifications related to a therapeutic area, the related ontology can be extended to capture the new information. If corticosteroids were found to be in two groups (perhaps by mechanism of action), the OralCorticosteroids class could be subdivided and future submissions would include that added precision. All stratifications that worked on the original model would work on the refined data so long as the subclass inference were performed on the new subclasses of OralCorticosteroids. New stratifications which depended on this added precision would only work on older data if that data were complemented by something which provided the precision, perhaps a drug ontology that mapped label names to the new classes.

It is also possible to change the data collected to be more general. For instance, if a topical steroids are used for rheumatoid arthritis, the appropriate ontology could have a relaxed concomitant medications list, including any corticosteroids instead of only oral corticosteroids. In this case, the route of administration would still be recorded, so any future data could be matched by conventional queries for oral corticosteroids. Future studies would permit strictly more compliant submissions, including those with topical corticosteroids.

Some changes to our world view are on "backward-compatible". For instance if clinical practice were to change from diagnosing phenylketonuria by signs of phenylalanine accumulation to using mass spectrometry, data from related studies may ...

In the interest of optimizing interoperability and leveraging industry interest in BRIDG, the FDA TA ontologies are mostly derived from BRIDG classes.

BRIDG is specifically limited to clinical trials. Procedures and observations are derived from from activity classes. These activity classes are scoped to stages of the clinical trial phases: definition, planning, scheduling and performance. For example, a clinical trial protocol may examine the effects of a particular drug of study which will be used in conjunction with a specific set of concomittant medications. The protocol includes prescribed administrations of the these medications as bridg:DefinedSubstanceAdministrations, usually associated with specific daytime offsets from the start of the study. A CRO will begin a study, perhaps adapting these bridg:DefinedSubstanceAdministrations to bridg:PlannedSubstanceAdministrations. When a participant enters the study, the calendar of bridg:DefinedActivities gets mapped to a calendar of bridg:ScheduledActivities. This will be populated with instances of e.g. bridg:ScheduledSubstanceAdministration. When the trial management software signals that it's time to perform some activity for a particular participant, the performed event will be associated with the defined, planned and scheduled events, for instance:

BRIDG is designed as a UML model and is expressed in RDF/OWL following the ODM 1.0 Specificaiton. This has some impact on the ontology:

BRIDG, and indeed most of clinical care, relies on shared terms identified by a tuple of a coding system identifier, a term code, and sometimes a version. The O-RIM's RDF representation of the CD.Code ISO21090 type looks like:

Clinical data interoperability, such as it is, relies mostly on two systems using the same code to capture an observation or procedure. The model restriction on renal:RheumatoidFactorObservation specifies that the coding have a code of some value. For a very precise restriction, the model for the above instance data looks like

As far as I know, there are no LOINC identifiers for super classes such as a general identifier for Rheumatoid factor [EGP 2014Aug7].

The hierarchy at the bottom allows a query for a general code like evs:Rheumatoid_factor can be answered by any more instance data with a more precise code like 14034-3. A DLQuery like RheumatoidFactorObservation and hl7:coding some <http://a.example/#evsRheumatoid_factor> will yield the instance :labObs1234. The converse is not true is not true unless all of the more precise information is supplied in some other way (e.g. bridg:approachSite). In order to ask specific questions of data submitted with more general codes, the submission would have to complement the codes with specifics that supplied all six LOINC axes:

Use cases may motivate extending our Observation class to capture these axes (e.g. statification by site or methodology), but this would be more work than using specific codes.

The FDA TA Ontologies can:

For the latter two, we must pick either existing terms or invent new terms with sufficient definitions that we have "clinical compatibility" between subjects in different studies. The modeling is the same either way.

LOINC terms are excruciatingly precise (driven by both clinical care and liability use cases) and have a consistent coded description convention for six different axes. If the submission standards are written in terms of higher-level terms like EVS Rheumatoid factor (MTHU001879), the sampled data could be radically different (e.g. kind, system, and method below), though protocol approval processes will probably limit this variability.

An example usage shows that data taken by different lab tests in different protocols could be stratified together:

It's possible that the protocol review process imposes constraints on the permissible labs (and lab codes). It would be nice for submitters, reviewers, and later analysts of aggregate data if the TA ontologies reflected at least these constraints. One outcome of this could be that multiple precise codes are permissible. This can be modelled by declaring a union of permissible values:

This is extracted from File:CodingExample.ttl .

The Semantic Web (or Linked Open Data) practice of assigning dereferencable URLs assists in discovery and debugging ontologies and data. While IHTSDO has assigned web URLs to the SNOMED ontology, retrieving them results in a Not Found error. There is a reasonable expectation that this will be fixed in the near future and getting e.g. snomedct:77089006 will return an RDF representation of that resource. There are, however, useful third party browsers for SNOMED which can provide useful information like http://schemes.caregraf.info/snomed#!77089006 . These can be linked to the CD data types above (the things in the []s) with a rdfs:seeAlso.

LOINC has not assigned web URLs, however there are at least two provided by third parties. search.loinc.org provides a useful navigator which appears to have an institutional backing.

The TA ontologies provide a constellation of observations and assessments associated with a particular Therapeutic Area. It's useful to connect the TA ontologies to external anatomic, physiological and disease ontologies for:

BRIDG provides properties to connect performed observations, assessments and diagnoses to external codes. The bridg:Activity.identifier property can identify the e.g. standard lab test identififier for an observations (however here we use the hl7:coding property in order to leverage that ontology which fully specifies ISO 21090 codes). An observation's approach site can identify anatomical terms. The observation result can be a bridg:PerformedObservationResult or one of its subclasses:

and can use the bridg:Activity.identifier to identify a pathological process or a disease. There may be many identifiers or approach site for an observation or diagnosis:

Note that some of these codes are identified by blank nodes with CD coding properties and some are identified directly by URL. The former is more familiar to conventional clinical practice but the latter is more convenient and appropriately leverages web technology.

Most clinical informatics is focused on recording detailed clinical observations rather than documenting clinical science. As an example, a LOINC code like loinc-Rheumatoid_factor-Titr-Pt-Synv_fld-Qn-Aggl above includes specifics like units and method. There are many statements one might want to make about the general concept of Rheumatoid factor, but they won't include specifics of measurement.

SNOMED addresses this by having a code for "Rheumatoid factor" which is distinct from "Rheumatoid factor measurement". SNOMED classifies the former as a substance and the latter as a procedure. We can consider LOINC and EVS codes as identifiers for procedures while the substance is appropriate for assertions associated with an ontology for clinical decision support or differential diagnostics.

SNOMED has an enormous amount of assertions reflecting physiology from the perspective of a pathologist:

and some information about tests, sometimes broken down by medium (as in LOINC's @@):

The SNOMED-CT ontology does not include assertions that capture conventional clinical practice, e.g.

These arcs connecting observable physiological phenomena to pathologies and morphologies do not currently exist in SNOMED [EGP 2014Aug7], though it makes sense that these could come from a clinical decision support ontology. If such an ontology emerges, it can be compared against the observations and assessments in a particular TA ontologies or any of the libraries it imports. Appropriate modeling can better leverage these annotations. For instance, asserting that

would not automatically assert that it was useful to diagnose other autoimmune reactions like lupis. Modelers will have to decide based on how general each phenomena is.

The current project is scoped to efficacy analysis, though of course much of the model incorporates data that would be needed for safety analysis. Initially, the project scope excluded protocol modeling. While the Concept Maps include the notion of concomittant medications, this property is not intrisic to the medication but instead to the use of the medication in a particular study. It's not possible to model concomittant medications without modeling protocol. There might be additional metadata in bridg:ProductRelationships.