Njål and I are just back from NABShow 2016, 16-21 April in Las Vegas where MediaScape partners Norut and Vicomtech promoted the timing object and the W3C Multi-device Timing Community Group. 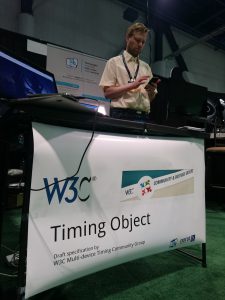 You may find our main leaflet here : Timing object in a nutshell 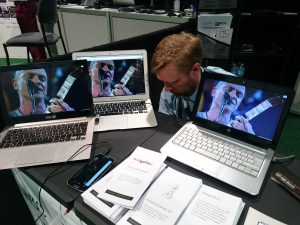 Our setup in the Futures Park booth was fairly simple; four different laptop devices and two smart phones.  As you can see in the picture we used the laptops to present a selection of HTML5 videos being synchronized across the different screens (using Shared Motion and the MediaSync library). Two laptops were cabled, two on WiFi. We used Firefox and Chrome browsers. One smart phone was used for controls (play, pause time-shifting the timing objects as well as switching between videos). Another smart phone was used to present the audio of the video. We also brought two pairs of headphones, one connected to a laptop computer and one connected to the smart phone. This way, by using both headphones together, our audience could verify echoless sync between smartphone and laptop computer. We also made sure to reload the Web-browsers to demonstrate how quickly sync is regained – fractions second as long as video data is available. The demos ran in perfect synchrony for four consecutive days, without as much as a glitch. That’s impressive – especially considering the poor networking conditions in the NAB exhibition hall!

Reactions to the demonstrations were overwhelmingly positive. Many people expressed excitement that there was an initiative aiming at improved support for timing on the Web platform. People were also taken aback by the quality of the synchronization as well as the prospect of doing this globally. Some people were curious about use cases, whereas others immediately recognized the need for timing and synchronization in various broadcasting applications, be it live streaming, ad-insertion, tiled screen setups, timed UGC, collaborative viewing, remote control or what not. We mentioned concrete use cases such as secondary device applications, alternative audio tracks on secondary devices (accessibility etc). We also presented more high level value promises such as timing-consistency in UX and the important role of timing with respect to integration and interoperability between heterogeneous media systems. Finally, we had some very concrete interests from very central players. We’ll let you know when interests materialize.

So, a big thanks to Norut, Vicomtech and MediaScape for an excellent show at NAB!
Next major event up for the Multi-device Timing CG will likely be a F2F in Lisbon at TPAC 2016 in september.