From OWL
Jump to: navigation, search

This document serves as an introduction to OWL 2 and the various other OWL 2 documents. It describes the syntaxes for OWL 2, the different kinds of semantics, the available profiles (sub-languages), and the relationship between OWL 1 and OWL 2.

This document provides a non-normative high-level overview of the OWL 2 Web Ontology Language and serves as a roadmap for the documents that define and describe OWL 2.

Ontologies are formalized vocabularies of terms, often covering a specific domain and shared by a community of users. They specify the definitions of terms by describing their relationships with other terms in the ontology. OWL 2 is an extension and revision of the OWL Web Ontology Language developed by the W3C Web Ontology Working Group and published in 2004 (referred to hereafter as “OWL 1”). OWL 2 is being developed (and this document was written) by a follow-on group, the W3C OWL Working Group. Like OWL 1, OWL 2 is designed to facilitate ontology development and sharing via the Web, with the ultimate goal of making Web content more accessible to machines.

Figure 1 gives an overview of the OWL 2 language, showing its main building blocks and how they relate to each other. The ellipse in the center represents the abstract notion of an ontology, which can be thought of either as an abstract structure or as an RDF graph (see 2.1 Ontologies). At the top are various concrete syntaxes (see 2.2 Syntaxes) that can be used to serialize and exchange ontologies. At the bottom are the two semantic specifications that define the meaning of OWL 2 ontologies (see 2.3 Semantics).

Most users of OWL 2 will need only one syntax and one semantics; for them, this diagram would be much simpler, with only their one syntax at the top, their one semantics at the bottom, and rarely a need to see what's inside the ellipse in the center. 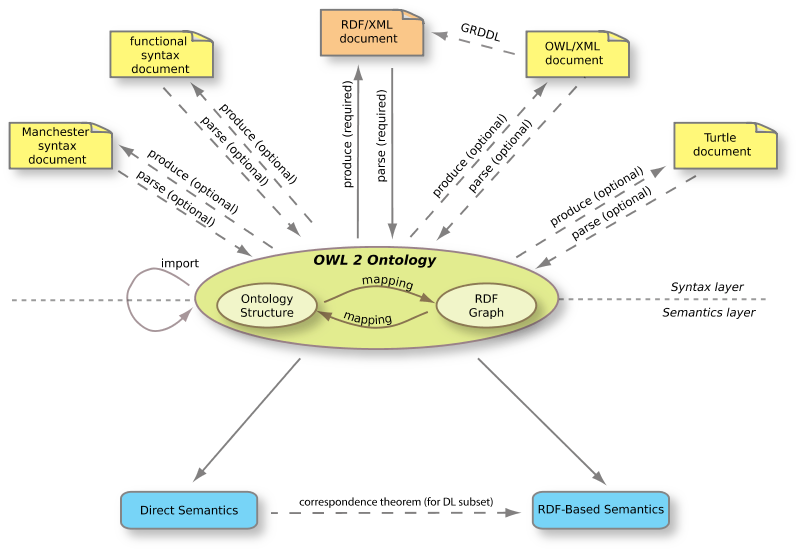 Figure 1. The Structure of OWL 2

The conceptual structure of OWL 2 ontologies is defined in the OWL 2 Structural Specification document [OWL 2 Structural Specification]. This document uses UML [UML] to define the structural elements available in OWL 2, explaining their roles and functionalities in abstract terms and without reference to any particular syntax. It also defines the functional-style syntax, which closely follows the structural specification and allows OWL 2 ontologies to be written in a compact form.

Any OWL 2 ontology can also be viewed as an RDF graph. The relationship between these two views is specified by the Mapping to RDF Graphs document [OWL 2 RDF Mapping], which defines a mapping from the structural form to the RDF graph form, and vice versa. The OWL 2 Quick Reference Guide [OWL 2 Quick Guide] provides a simple overview of these two views of OWL 2, laid out side by side.

In practice, a concrete syntax is needed in order to store OWL 2 ontologies and to exchange them among tools and applications. The primary exchange syntax for OWL 2 is RDF/XML [RDF Syntax]; this is indeed the only syntax that must be supported by all OWL 2 tools (see Section 2.1 of the OWL 2 Conformance document [OWL 2 Conformance]).

While RDF/XML provides for interoperability among OWL 2 tools, other concrete syntaxes may also be used. These include alternative RDF serializations, such as Turtle [Turtle]; an XML serialization [OWL 2 XML]; and a more "readable" syntax, called the Manchester Syntax [OWL 2 Manchester Syntax], that is used in several ontology editing tools. Finally, the functional-style syntax can also be used for serialization, although its main purpose is specifying the structure of the language [OWL 2 Structural Specification].

The OWL 2 Structural Specification document defines the abstract structure of OWL 2 ontologies, but it does not define their meaning. The Direct Semantics [OWL 2 Direct Semantics] and the RDF-Based Semantics [OWL 2 RDF-Based Semantics] provide two alternative ways of assigning meaning to OWL 2 ontologies, with a correspondence theorem providing a link between the two. These two semantics are used by reasoners and other tools, e.g., to answer class consistency, subsumption and instance retrieval queries.

The Direct Semantics assigns meaning directly to ontology structures, resulting in a semantics compatible with the model theoretic semantics of the SROIQ description logic—a fragment of first order logic with useful computational properties. The advantage of this close connection is that the extensive description logic literature and implementation experience can be directly exploited by OWL 2 tools. However, some conditions must be placed on ontology structures in order to ensure that they can be translated into a SROIQ knowledge base; for example, transitive properties cannot be used in number restrictions (see Section 3 of the OWL 2 Structural Specification document [OWL 2 Structural Specification] for a complete list of these conditions). Ontologies that satisfy these syntactic conditions are called OWL 2 DL ontologies. "OWL 2 DL" is used informally to refer to OWL 2 DL ontologies interpreted using the Direct Semantics [OWL 2 Direct Semantics].

OWL 2 Profiles [OWL 2 Profiles] are sub-languages (syntactic subsets) of OWL 2 that offer important advantages in particular application scenarios. Three different profiles are defined: OWL 2 EL, OWL 2 QL, and OWL 2 RL. Each profile is defined as a syntactic restriction of the OWL 2 Structural Specification, i.e., as a subset of the structural elements that can be used in a conforming ontology, and each is more restrictive than OWL DL. Each of the profiles trades off different aspects of OWL's expressive power in return for different computational and/or implementational benefits.

Any OWL 2 EL, QL or RL ontology is, of course, also an OWL 2 ontology and can be interpreted using either the Direct or RDF-Based Semantics. When using OWL 2 RL, a rule-based implementation can operate directly on RDF triples and so can be applied to an arbitrary RDF graph, i.e., to any OWL 2 ontology. In this case, reasoning will always be sound (that is, only correct answers to queries will be computed), but it may not be complete (that is, it is not guaranteed that all correct answers to queries will be computed). Theorem PR1 of the Profiles document states, however, that (in general) when the ontology is consistent with the structural definition of OWL 2 RL, a suitable rule-based implementation performing ground atomic queries will be both sound and complete.

OWL 2 has a very similar overall structure to OWL 1. Looking at Figure 1, almost all the building blocks of OWL 2 were present in OWL 1, albeit possibly under different names.

The central role of RDF/XML, the role of other syntaxes, and the relationships between the Direct and RDF-Based semantics (i.e., the correspondence theorem) have not changed. More importantly, backwards compatibility with OWL 1 is, to all intents and purposes, complete: all OWL 1 Ontologies remain valid OWL 2 Ontologies, with identical inferences in all practical cases (see Section 4.2 of OWL 2 New Features and Rationale [OWL 2 New Features and Rationale]).

OWL 2 adds new functionality with respect to OWL 1. Some of the new features are syntactic sugar (e.g., disjoint union of classes) while others offer new expressivity, including:

OWL 2 also defines three new profiles [OWL 2 Profiles] and a new syntax [OWL 2 Manchester Syntax]. In addition, some of the restrictions applicable to OWL DL have been relaxed; as a result, the set of RDF Graphs that can be handled by Description Logics reasoners is slightly larger in OWL 2.

These documents are, however, all rather technical and mainly aimed at OWL 2 implementers and tool developers. Those looking for a more approachable guide to the features and usage of OWL 2 may prefer to consult one of the user documents (Primer, New Features and Rationale, and Quick Reference Guide).

This section summarizes the changes to this document since the Recommendation of 27 October 2009.

No changes have been made to this document since the Proposed Recommendation of 22 September, 2009.

This section summarizes the changes to this document since the Last Call Working Draft of 11 June, 2009.

The starting point for the development of OWL 2 was the OWL1.1 member submission, itself a result of user and developer feedback, and in particular of information gathered during the OWL Experiences and Directions (OWLED) Workshop series. The working group also considered postponed issues from the WebOnt Working Group.

This document has been produced by the OWL Working Group (see below), and its contents reflect extensive discussions within the Working Group as a whole. The editors extend special thanks to Ivan Herman (W3C/ERCIM), Ian Horrocks (Oxford University) and Peter F. Patel-Schneider (Bell Labs Research, Alcatel-Lucent) for their thorough reviews.