This is to serve as a real-world use case of the kinds of information that are required for understanding and treating a neurological disease. The links and summaries included here could be represented as a series of RDF graphs. The BioRDF activity hopefully will supply some of the molecular and genetic resources as RDF to make this possible.

Parkinson's is a complex progressive disease with no real cure, and whose etiology is still not well understood. Both genetic (MAO, PARK genes) and environmental factors (e.g., MPTP, the herbicide Paraquat) have been implicated. However, the reason some individuals get it and others do not is still a mystery. Without a better understanding of the cause and development of PD, effective treatments will be severly limited. It is likely that neurodegenerative disease such as PD will require looking across many pathway mechanisms, cellular activities, genetic backgrounds, demographics, and suspected toxic agents. Therefore, comprehensive knowledge aggregates for PD and related diseases may prove to be very beneficial.

Features of classic PD (MESH:10038) include a loss of dopaminergic neurons in the substantia nigra (SN, MESH:13038) and the presence of Lewy bodies (MESH:15960), intracellular inclusions, in surviving neurons in various areas of the brain, particularly the SN (Nussbaum and Polymeropoulos, 1997). Autosomal recessive juvenile Parkinson disease (PARK2; 600116), however, does not have Lewy body pathology (Nussbaum and Polymeropoulos, 1997).

Genetic underpinnings (based on LOD scores and molecular analyses)

SNCA (163890), respectively, on 4q21; due to mutation in or triplication of the alpha-synuclein gene http://www.ncbi.nlm.nih.gov/entrez/query.fcgi?db=gene&cmd=Retrieve&dopt=full_report&list_uids=6622 Alzheimer’s association –

MAOB (monoamine oxidase B ) catalyzes the oxidative deamination of biogenic and xenobiotic amines, and produces toxic oxygen free radicals that can activate compound such as MPTP http://www.ncbi.nlm.nih.gov/entrez/query.fcgi?db=gene&cmd=Retrieve&dopt=full_report&list_uids=4129

ND3 ; There is also evidence that mitochondrial mutations may cause or contribute to Parkinson disease (see 556500). http://www.ncbi.nlm.nih.gov/entrez/query.fcgi?db=gene&cmd=Retrieve&dopt=full_report&list_uids=4537

Compounds such as MPTP (1-methyl-4-phenyl-1,2,3,6-tetrahydropyridine, PubChem sid:348099), rotenone (PubChem sid:149743), and paraquat (PubChem sid:159219) have been shown to induce PD symptoms in both animals and humans (drug addict studies) (Toxin-induced models of PD). Mutant mice lacking a functional MAO B gene were resistant to the neurodegenerative effects of MPTP (Grimsby et al., 1997)

Kissel and Andre (1976) described a pair of female MZ twins, both of whom had a combination of parkinsonism and anosmia. Olfactory impairment is frequent in PD (Ward et al., 1983). Both twins reported onset of symptoms at age 36 years, which is unusually early, particularly for women (Kessler, 1978). Kissel and Andre (1976) noted that 2 families with the same association had previously been reported and they suggested a causative role for a genetically determined anomaly of dopamine metabolism.

Calne and Langston (1983) advanced the view that in most cases the cause is an environmental factor, possibly toxic, superimposed on a background of slow, sustained neuronal loss due to advancing age. Finding parkinsonism in 1-methyl-4-phenyl-1,2,3,6-tetrahydropteridine (meperidine; MPTP) drug users (Langston et al., 1983) revived interest in reexamining environmental factors. Barbeau et al. (1985) also postulated that Parkinson disease is the result of environmental factors acting on genetically susceptible persons against a background of 'normal' aging.

Nathans (2005) noted the remarkable coincidence that the abbreviation MPTP, for the drug that causes Parkinson disease by selectively damaging dopaminergic neurons, is coincidentally the code for the first 4 amino acids of human, mouse, and rat tyrosine hydroxylase, the enzyme which marks all dopaminergic neurons.

Motor symptoms in Parkinson disease are generally thought to result from the deficiency or dysfunction of dopamine or dopaminergic neurons in the substantia nigra, regardless of etiology (Nussbaum and Polymeropoulos (1997)).

Lewy bodies and Lewy neurites in postmortem brain tissue from Parkinson disease patients immunostained for the molecular chaperones HSP70 (140550) and HSP40 (604572), suggesting that chaperones may play a role in Parkinson disease progression, as was demonstrated in their studies in flies carrying mutated alpha-synuclein (163890) in whom coexpression of human HSP70 mitigated the loss of dopaminergic neurons (Auluck et al. (2002)).

Levodopa, or L-dopa (PubChem sid:3648 , KEGG cpd:C00355), which is converted to dopamine in the brain, remains the gold standard for treating Parkinson's disease. Treatment with dopamine itself isn't possible, because dopamine doesn't cross the body's blood-brain barrier. Levodopa, on the other hand, does cross this barrier, but only a small amount actually reaches the brain. Combining levodopa with another drug, carbidopa (Sinemet), causes more levodopa to get to the brain and helps reduce some of the side effects of this therapy. During early treatment, side effects from levodopa therapy are usually not a major problem. But for unknown reasons, the drug works less evenly and predictably as the disease progresses. As a result, some people may experience involuntary movements (dyskinesia), especially when the medication is having its peak effects. Waxing and waning of the response to the drug (wearing off effects) also is common, so that the length of time that each dose is effective begins to decrease, leading to more frequent doses. Other side effects include hallucinations, reduced blood pressure and nausea.

Glial cell line-derived neurotrophic factor (GDNF; 600837) can be delivered directly into the putamen of 5 Parkinson patients in a phase 1 safety trial (Gill et al. (2003)). After 1 year, there were no serious clinical side effects, a 39% improvement in the off-medication motor subscore of the Unified Parkinson Disease Rating Scale (UPDRS), and a 61% improvement in the activities of daily living subscore. Positron emission tomography (PET) scans of [18F]dopamine uptake showed a significant 28% increase in putamen dopamine storage after 18 months, suggesting a direct effect of GDNF on dopamine function.

Electrical inhibition, pharmacologic silencing, and STN ablation can improve the motor symptoms in PD, presumably by leading to suppression of firing activity of neurons in the substantia nigra (SN) .Luo et al. (2002) Using a recombinant adeno-associated virus to transduce excitatory glutaminergic neurons in the rat STN with glutamic acid decarboxylase (GAD), the enzyme that catalyzes synthesis of the inhibitory neurotransmitter GABA

Cyclooxygenase-2 (COX2; 600262), the rate-limiting enzyme in prostaglandin E2 synthesis, is upregulated in brain dopaminergic neurons of both PD and the MPTP mouse model of that disorder (Teismann et al. (2003) showed that).

The above mentioned pathenogenesis and therapeutic Strategies are detailed in American Academy of Neurology's evidence-based practice guidelines:

These guidelines summarize clinical evidence linking PD's genetic causes to respective medication treatment. Based on these guidelines, American Medical Directors Association (AMDA) provides guidance for caring patients with PD in the long term care setting in "Parkinson's disease in the long-term care setting". A plan consists of 21 steps is depicted. However, some concurrent tasks are shown as sequential tasks due to the lack of temporal concepts in the algorithm.

To generate a personalized care plan, the types of knowledge and their connections are shown in the following figure.

There are many diagnotic modality that are deemed to be specific on PD disgnosis. The following Ontology is based on *Practice Parameter: Diagnosis and prognosis of new onset Parkinson disease 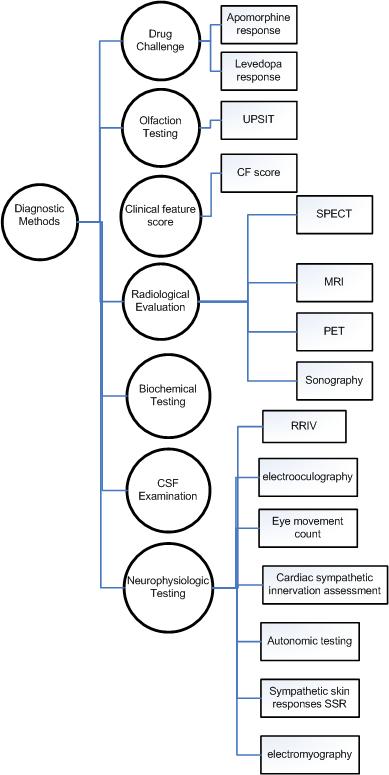 The treatment of PD consists of pharmacological treatment for the symptoms, physiotherapy and a host of alternative therapies that are believe to be effective in delaying the neuron-degeneration. The following Figure illustrates the ontological relationship of identified treatment in ANN’s “practice parameters”

Locus ceruleus is severely damaged in patients with PD, and both neuronal loss and noradrenaline depletion in locus ceruleus were found to be significantly more severe in demented PD patients (Cash et al. "Parkinson's disease and dementia: norepinephrine and dopamine in locus ceruleus. Neurology 1987;37:42-46.

PD patients have biochemical deficits in the nucleus basalis of Meynert and in the cerebral cortex. Cholinaceytyltransferase (ChAT) activity is decreased in the frontal cortex and nucleus basalis of Meynert, and the decrease is greater in the frontal cortex of PD patients with dementia. (Dubois et al. "A subcortico-cortical cholinergic system is affected in Parkinson's disease. Brain Res 1983;288:213-218.) ChAT reductions in the temporal neocortex were correlated with the degree of mental impairment. The degeneration of cholinergic neurons in the nucleus basalis of Meynert may be related to declining cognitive function in PD. (Perry et al. "Cholinergic correlates of cognitive impairment in Parkinson's disease: comparisons with Alzheimer's disease. J. Neurol Neurosurg Psychiatry 1985;48:413-421) Only presynaptic cholinergic markers are related to dementia in PD (Perry et al. "Cortical neuropathological and neurochemical substrates of Alzheimer's and Parkinson's diseases. J Neural Transm Suppl 1987;24:131-136).

Cholinesterase inhibitors are designed to increase levels of acetylcholine, a chemical messenger involved in memory, judgment and other thought processes. Acetylcholine is released by certain brain cells to carry messages to other cells. After a message reaches the receiving cell, various other chemicals, including one called acetylcholinesterase, break acetylcholine down so it can be recycled.

Clarke et al. (2000) studied the kinetics of neuronal death in 12 models of photoreceptor degeneration, hippocampal neurons undergoing excitotoxic cell death, a mouse model of cerebellar degeneration, and in Parkinson and Huntington (143100) diseases. In all models the kinetics of neuronal death were exponential and better explained by mathematical models in which the risk of cell death remains constant or decreases exponentially with age.

Progressive postnatal depletion of dopaminergic cells has been demonstrated in weaver mice, a mouse model of Parkinson disease associated with homozygosity for a mutation in the H54 region of Girk2, a putative G protein inward rectifier protein potassium channel. Bandmann et al. (1996) found no mutations of the pore region in KCNJ6 (600877), the human homolog, in 50 cases of Parkinson disease, 23 of which were index cases of familial Parkinson disease.