Netflix would like to implement a fast, lightweight, secure application protocol for communication between a Netflix client implemented in Javascript, running in a browser or other HTML/CSS/JS-based platform and Netflix servers (running on a cloud computing platform). Authentication may be bootstrapped from some pre-provisioned credential bound to the device. This secure protocol is then used for functions such as authorization to play movies, device registration, reporting of usage statistics, etc.

This document assumes the availability of key storage in the browser or browser framework. This “key store” must not allow Javascript code to access the raw bytes of a key (public keys being a notable exception) but instead marshals requests for cryptographic operations using the stored keys. In most cases, it will be desirable to have a per-origin key store. The key named “MySecretKey” used by an app running from “foo.com” may not be accessed by an app running from “bar.com”. Further, “bar.com” may have its own key named “MySecretKey” without conflicting with the key of the same name for domain “foo.com”.

Each key has a unique local identifier used to refer to it over the Javascript API. In this document we assume this is simply a string value chosen by the calling code. Additionally, the key store allows keys to be added, deleted, etc.

At a minimum the key store should allow the following:

For the sake of simplicity, this document references keys by names in calls to functions like encrypt(). An actual API definition may want to have more flexibility, supporting a first class KeyHandle object, for example.

This document assumes that every cryptographic key is one of the following types:

When pre-provisioned symmetric keys are used, some kind of globally unique identifier must also be provided so that services can look up the key in their own server-side database. For public-private key pairs, the same approach could be used, or a certificate could be used.

As noted in the above description of pre-provisioned keys, keys may change at the whim of a device manufacturer, network operator, etc. We have seen multiple examples of keys changing due to firmware updates, creation of short-lived secondary credentials (IPSEC with pre-shared keys leveraged to affect an X.509 certificate enrollment, where resultant certs were only valid for a number of hours), swapping of cryptographic hardware tokens, etc. It can be expected that services which use such keys are notified of the new keys before they change. However, when keys change in such a manner, we must be able to identify a device across such key changes to maintain continuity of services.

To achieve this continuity, at present, we use a per-device, per-domain unique identifier which is constant. This approach may be fine for devices, but for a browser the constant nature of this identifier may not be possible. In this case, so long as there is a “key store ID” or some such per-browser per-domain identifier that does not change unless a user reinstalls their browser, we achieve the same goal.

To create commonality in both the device & browser contexts, we propose a common API to access such an identifier.

Each message sent to and received from Netflix servers is authenticated, integrity protected and (optionally) encrypted using a lightweight arbitrary security message envelope, referred to here as MsgSec.

Before a device or browser has a session key and a session token, the MsgSec protocol wrapper will rely on either pre-provisioned keys or runtime generated keys which are associated to a domain specific unique identifier.

The following table describes a MsgSec wrapped request message from the client when using pre-provisioned or runtime generated keys. (The packaging of this data into an over-the-wire format is beyond the scope of this document.)

The “ID” field may be a domain specific GUID, an actual hardware identifier or some other device and/or browser identifier which is guaranteed unique. The “Msg” field is an arbitrary message which may be encrypted. The “MAC” is a message authentication code.

In this example, the WebCrypto APIs are used to:

The following table describes a MsgSec wrapped response message from the server when using pre-provisioned or runtime generated keys.

In this example, the WebCrypto APIs are used to:

After provisioning session keys & a session token (using either pre-provisioned keys or runtime generated keys) we can use these credentials to provide essentially the same security wrapper as above. The following is a request from client to server:

The following table describes a MsgSec wrapped request message from the client when using session keys.

The following table describes a MsgSec wrapped response message from the server when using session keys.

Again, this example response is identical to the previous example response using pre-shared / generated keys, except that the names of the keys would change to use the relevant identifiers for the session keys.

In order to create session keys, both client and server must have a pre-defined key exchange mechanism. We propose two possible mechanisms: 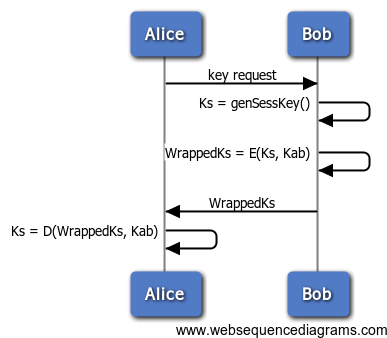 The following code example shows the “client” / Alice side of the above key unwrapping key exchange:

At this point, we can now reference “Ks” for use in cryptographic operations requiring a symmetric key.

The following code example shows the “server” / Bob side of the above key unwrapping key exchange:

(See the Wikipedia article for background.) For clarity, the basic 2-party Diffie-Hellman exchange is shown below: 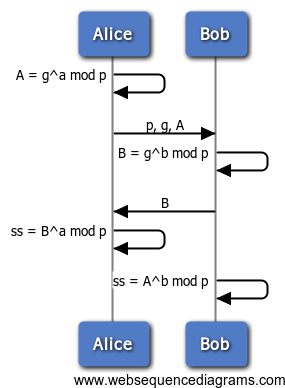 At this point, we have created a shared secret which is inaccessible to Javascript, but we can’t yet do anything useful with it. In order to transform the shared secret into something usable we need to use a key derivation algorithm (RFC 2631? or something simpler?) to compress or expand the keying material ‘ss’ to keying data which is the appropriate size for some other algorithm.

This key derivation operation must be a first-class function supported by WebCrypto, because we do not want ‘ss’ to be accessible by Javascript. We might do something like this:

Since a Diffie-Hellman exchange normally creates a large amount of keying material (1024 bits is common) using the same shared secret to create several much smaller keys is acceptable.