This document discusses use cases and requirements for accessing depth stream from a depth camera. It is assumed this functionality will be defined in an extension specification layered on top of the existing getUserMedia API.

Depth cameras have become popular in the consumer market with devices such as the Kinect [1] and Creative Senz3D [2]. There are three main depth sensing technologies:

Based on these technologies, depth cameras are able to provide a depth map, which provides the distance information between points on an object's surface and the camera. Some cameras are also able to provide a synchronized RGB image along with a depth map. According to [6], depth information is able to enhance the RGB-only computer vision in robustness and performance. As discussed in [7], the depth information can also be used for "free viewpoint" video rendering that can help create immersive conferencing. 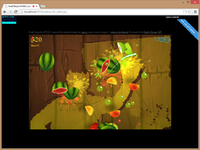 Bob launches the HTML5 "Fruit Ninja" style video game in a browser running on a device connected to a depth camera. The browser notifies Bob that this site wants to access the depth camera. Bob grants permission for this access. Then the game's user interface instructs Bob that he can now wave his hand around in front of the depth camera to cut the flying fruit. The game's user interface can also blend a contour of Bob's body into the game's scene to help him locate his position and improve the game play. Bob then waves one of his hands to cut an apple on the start screen in order to start the game. Bob is now able to interact with the game by waving his hands around to cut the flying fruit.

For another example of a video game with hand gesture tracking, see the demonstration video. The Google Glass team have also released a game that delivers this type of interaction called Shape Splitter. While this currently uses image processing, it shows that this interaction model is very relevant in wearable devices too.

Alice is an artist producing handicrafts and selling them via an online consumer-to-consumer shopping site. The shopping site enables Alice to capture and upload 2D images of her products using a standard RGB camera. And this site also allows users to create 3D models of their products if a combined "RGB and depth" camera is available. After Alice clicks the "create a 3D model" button of the shopping site, the browser asks for permission to access the combined color and depth camera. Alice grants permission for this access. Then the site shows Alice a preview widget which fuses the RGB video and depth map into a 3D scene. The site asks Alice to move the combined colour and depth camera around to scan her product. The preview widget shows an indicator to let Alice know if she is moving is too fast or too slow. After the scanning is complete the site creates a 3D model with a color texture map of Alice's product. After Alice checks and approves her 3D model, it is uploaded to the shopping site. Now potential customers are able to view a rich 3D representation of Alice's product.

Alice and Bob usually use a video chat site (based on WebRTC technology) to talk each other. This site is upgraded to support a "3D chat room" feature. Alice and Bob decide to try this new feature. Alice first clicks "Enter the 3D Chat Room" button on this site. Alice's browser asks for permission to access the combined RGB and depth camera that is attached to her computer. Alice grants permission for this access. Then the site fuses the local RGB stream with the depth map stream to project them into a local 3D scene. Alice's browser also streams the RGB stream and depth stream to Bob's browser. Bob's browser recieves the remote RGB stream and depth map stream from Alice and projects them into a local 3D scene. Bob then does the same in his browser. After that, both Alice and Bob are able to see each other in their respective local 3D scenes. They are also free to change the view point of the 3D scene of the video conference.

Dave is visually impaired and regularly uses a screen reader to browse the web. Kate is hearing impaired and has a combined RGB and depth camera attached to her computer. Dave and Kate wish to communicate using an accessible 3D video conference. Dave connects to the conference site and enters a new chat room in text only mode. Kate then connects to the same conference site and enters the same chat room. Kate's browser asks for permission to access her combined RGB and depth camera. Kate grants permission for this access. Kate now sees a local video preview of herself and then configures the site to enter a "translation mode" that translates her gestures using American Sign Language into text that is then transmitted to Dave. Dave's screen reader then converts this text to speech and Dave can reply by using a braille enhanced keyboard, or even a speech-to-text convertor. They are now both easily able to communicate using this accessible 3D video conference.

Mary has a mobile device that includes a built-in depth camera (see Project Tango[9] for one example). Using this device she can run a web application that uses the depth map of the space around her in order to place virtual objects and information. The screen or display on her mobile device show the combination of the background video of the world she sees with the virtual objects and information overlaid on top. This depth map allows the web application to more accurately detect planes, surfaces and objects so it can seamlessly blend the virtual content into the background video making the overall user experience more compelling and believable.

This general use case applies to a whole category of applications ranging from games (e.g. bouncing virtual balls off the ground or wall planes in front of you) through to detailed spatial analysis applications (e.g. measuring rooms and presenting information about hidden infrastructure and services like plumbing and electrical cabling) and more.

# The UA must enable a web application to transmit the depth stream to a remote host without any significant loss of accuracy. (deferred to a future version)

(The streams are calibrated if requested together. The behavior is conceptually similar to how camera and microphone inputs are synchronized.)

3) Request a depth stream and a RGB video stream in two separate MediaStreams (the streams are not calibrated, as they can be sourced from different cameras):

4) The value of each pixel of a 16-bit depth map of a depth stream frame can be read (LMD3) using the APIs provided by the CanvasRenderingContext2D context and ArrayBuffer. However, since the canvas drawing surface used to draw and manipulate 2D graphics on the web platform and the ImageData interface used to represent image data do not support 16 bits per pixel, the depth map values are converted to 8-bit grayscale by the implementation when the MediaStream s containing the depth stream is wired into a HTMLVideoElement video as discussed in the example 2. The width w, height h, and framerate fps of the converted stream are developer-configurable: