This OntoLex wiki page documents the procedure, methods and modeling of the creation of the OntoLex-Lemon Morphology Module. This module is the outcome of a collaborative work of the OntoLex community members which is built on regular telcos and discussions via the mailing list. Everyone can join the creation process by joining the W3C Ontology-Lexica Community group to participate in the calls and e-mail exchange.

WHEN'S THE NEXT CALL: please see the most recent agenda/minutes document on GDrive. Unless announced otherwise (see below), meetings follow a bi-weekly rhythm.

Since 2019, these discussions are also supported by and conducted in collaboration with Nexus Linguarum, an open academic network funded as a Cost Action (2019-2023). Registration to Nexus Linguarum is free and without obligations, and also not required for joining the discussion, but recommended, as Nexus is engaged in organizing events related to our discussions. On how to join (but OntoLex membership registration is) see their web site.

The contents below reflect the module development and describes

This preparatory phase served to define the purpose and scope of the module based on example data and identified representation needs.

In this phase, those examples of representation needs which were marked in Phase I as “should be an explicit part of the model” have been explored in more detail. They formed the modeling basis for a module draft that fulfills the first purpose, i.e. the representation of morphological decomposition on the lexical entry and form levels. At the end of this phase an interim report about the status of the Morphology Module has been published in the paper Challenges for the Representation of Morphology in Ontology Lexicons.

The published module draft has been taken as the starting point to proceed with the development of the second purpose, i.e. enabling the representation of building patterns that are involved in the formation of lexical entries and forms. Detailed discussions investigated the suitability of numerous drafts that would enable an automatic generation of inflectional paradigms.

After a one-year pause of the module development, the regular telcos have been taken up again. Based on the published draft as well as the latest draft for the representation of inflectional building patterns the discussions continued with drafting the representation of word-formation patterns, resulting in a module draft that encompassed both of the defined module purposes. This draft is currently tested against the representation needs for several languages and constantly refined until the module is finished.

1.Stating elements that are involved in the decomposition of lexical entries and forms.

1.2 Morphological decomposition on the form level.

scope: Elements of which a form can consist include roots, stems, inflectional affixes and zero morphs. A form can NEVER be decomposed into lexical entries (including ontolex:Affix), components and forms.

2. Enabling the representation of building patterns that are involved in the formation of lexical entries and forms.

Katrien raised the question of the scope in the telco of the 15th January 2019. She pointed the distinction between traditional dictionary content (which contains not information about morphological rules and paradigms) vs. structured computational lexical data out. In the development of this module we are focussing more on the latter.

John's reply: We are at the intersection of the two. Going from traditional dictionaries up to the computational more structural lexical datasets.

The following representation needs have been collected in various discussions during the Morphology Module telcos by the community members. All of them will be realized in the modeling of the module.

The morphology module provides explicit subclasses of morph:Morph to represent roots, stems, affixe, transfixes, simulfixes and zero morphs (cf. representation need #2). It has been decided that other frequent types of morphs, e.g. prefix, suffix, circumfix, will not be included because the Lexinfo vocabulary can be reused to represent them. In case specific subclass relations between morph:AffixMorph and Lexinfo morph classes are required, the Lexinfo vocabulary can be extended, respectively (to do so refer to https://github.com/ontolex/lexinfo).

If the modelling decision from 2021-05-12 is to be respected, we need to add the current subclasses to Lexinfo

The following TermElements are not relevant for morphology or too coarse-grained:

LexInfo also provides sub*classes* of ontolex:Affix, e.g., lexinfo:Infix. For reasons of symmetry, and to avoid the notion of `term' (which may be felt inappropriate for morphological entities), we should extend the set of Affix/Morph subclasses in LexInfo rather than use TermElement instances. Accordingly, we removed the subclasses of Morph from the diagram.

E1: Representing the lexical entries of which a derived word (as a lexical entry) consists:

RESULT: Implement Option 1 and reuse the decomp vocabulary by adapting decomp:correspondsTo, decomp:subterm and decomp:Component according to this document.

The example entry is the Wiktionary entry for the noun driver. Since the elements of a morphological decomposition of a lexical entry are by itself lexical entries, these elements do not have to be further morphologically describable but can be specified by using the ontolex module.

Bettina: The object property for these statements should interrelate also other parts (i.e. derivational affixes) and not only a “particular realization of a lexical entry that forms part of a compound lexical entry”. There is the risk that the users will understand decomp:constituent as only applying to parts of compound words and not also to derived words.

Thierry: is also ok with decomp:constituent

Francesca: for NLP users it is confusing to have compounds composed of morphemes (de-compounding is a specific task)

Christian: agrees with Thierry (roughly: vocabulary needs to be consolidated in the end, and existing terminology has to take priority, not for the moment, though)

Fahad: It might be an idea to have more specific properties such as hasRoot and hasAffix/prefix/suffix/infix here instead of the rather generic consistsOfLexEntry or decomp:constituent.

Bettina: I have strong objections to use :hasRoot because decomposition of lexical entries on the word-formation level does not entail roots. This confuses the description of word-formation and inflection. Also, I cannot see how this would help to describe complex derived words, e.g. driverless. One would have to adopt a linear decomposition, rather than a binary one, i.e. :root_drive plus :suffix_er plus :suffix_less instead of :lex_driver_n plus :lex_less and then decompose :lex_driver again.

E2: Stating that a (derived) word has a derivational relation to another word:

E3: Stating the derivational relation that holds between a lexical entry and its derivative:

The notes below are preserved for historical reasons.

This second draft works through the first to subareas 1.1 and 1.2 of modelling as defined in the purpose and scope section.It shows the realization of the working examples E1 to E3 so far and proposes a modelling of the morphological decomposition of forms.

This first draft is based on John's initial modelling diagram proposed in the eLex abstract ([1]). Bettina reproduced it here and added numbers on the relation arrows and the namespace prefixes for better clarification. For now as prefix for the morphology module "morph" has been chosen. This can be debated and changed later.

The diagram has raised the following questions:

For example the straightforward modelling of an English noun and its regular plural would be:

We could make this a prototype as follows

Telco 22.01.2019 Description and generative aspects should be achieved with this module. They are mirrors of each other. For every element there will be an abstract version of it. A form will be composed of morphs. And then a form pattern will be composed by morph patterns. Morph pattern is composed of concrete morphs or of abstract morphs, which are slots (like the stems). As in N7: suffixes are concrete morphs and all noun stems that can be formed with these are the abstract stem slots, see structure proposal https://www.w3.org/community/ontolex/wiki/File:Morphology_structure_proposal.jpg

Telco 27.11.2018 Starting point for modelling as a reduced version of MMoOn Core. This version enables the representation of inflection, derivation and compounding with explicitly stating the morphs of which words consists and assigning meaning to the morphs.

B: represent derivation and compounding on LexicalEntry level and inflection on Form level (CC agrees)

Max: cluster examples in types of use cases

K: likes to have example data with mmoon and its source data (Bettina Hebrew and Xhosa Todo), provides examples as well

Summary: The discussion of specific modelling issues is postponed until we have collected and analyzed enough example data and defined the purpose of the moduele. 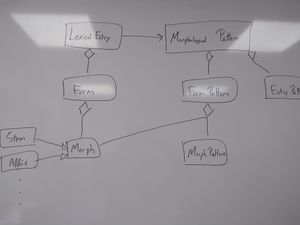