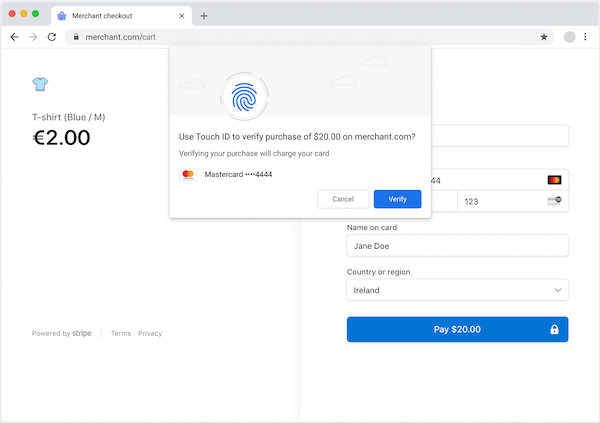 On 18 March Stripe presented the results of their 3-month experiment with Secure Payment Confirmation (SPC) to the Web Payments Working Group (minutes). The results were quite exciting: conversions went up by 8% and authentication sped up considerably. I share details below and you can find more in the Stripe presentation.

The vision for SPC is to streamline strong customer authentication (SCA) during a Web payment. This will improve Web commerce experiences, enhance security, and help the payments industry fulfill regulatory requirements (e.g., PSD2 in Europe). SPC does not yet exist as an API or a well-defined set of browser behaviors. The Stripe experiment tested some hypotheses for what SPC could become. Google engineers made the experiment possible through modifications to implementations of Web Authentication and Payment Request API in Chrome on MacOS. The Web Payments Working Group is about to embark on a more systematic elaboration of SPC’s features and scope.

The Stripe experiment sought to understand if users prefer strong authentication through one-time passwords or FIDO authentication. Why FIDO? The combination of CTAP from the FIDO Alliance and Web Authentication from W3C —commonly referred to as FIDO2— is an ideal backbone for an SCA solution. It is supported on all major browsers (desktop and mobile). Billions of deployed phones and laptops include built-in authenticators. FIDO2 provides better security and usability than passwords and explicitly seeks to meet regulatory requirements (see the FIDO white paper on meeting PSD2 SCA requirements).

For simplicity, the SPC experiment focused on card payments where the initial enrollment was performed with EMV® 3-D Secure (“3DS”). As I mentioned in a previous blog post, EMVCo, FIDO, and W3C are discussing multiple ways of using FIDO with 3DS. The experiment focused on using FIDO during the 3DS challenge flow. This proved a very informative starting point, but part of our ongoing work will be to ensure that SPC can be used in a broad range of payment flows and systems.

To understand the motivation for SPC, it is useful to consider how 3DS works on the Web today. My explanation is a simplified version.

This is how the first “superpower” of SPC came about. With SPC:

SPC, in its pilot manifestation, thus marries Payment Request API and Web Authentication. The idea is that developers will have more superpowers via SPC than when the APIs are used independently.

The second superpower of SPC is the browser’s “transaction confirmation dialog.” The goal is to have a built-in browser capability to create a consistent authentication experience across Web sites and platforms.

This is another departure from Web Authentication. Web Authentication is performed within a window opened by some origin. Stripe asked the Chrome team if the browser could manage the window instead of Stripe having to open one. The result is a built-in browser dialog, shown in the mockup included above. SPC delegates the authentication UX to the browser. Here’s how SPC worked during the experiment, leading up to the transaction confirmation dialog:

Stripe also wanted to leverage SPC to fulfill another PSD2 requirement: “dynamic linking.” The requirement involves cryptographic evidence that the user agreed to the transaction amount and beneficiary. The browser’s new transaction confirmation dialog displays the information required by PSD2, and when the user proceeds, the FIDO authenticator is used to sign the amount, beneficiary, and card information. Thus, the third superpower of SPC is built-in support for signed transaction confirmation data.

To summarize, the initial experiment with SPC involved these three new browser capabilities:

We have started work to elaborate a list of SPC benefits that emerge from these three capabilities. I imagine these initial three capabilities will remain part of the SPC vision, but people are already curious whether we can add more, such as standardized enrollment flows, zero-friction flows, sources of randomness as input to FIDO authentication, and the ability to invoke SPC within a Payment App. We will discuss potential SPC features at the remote meeting of the Web Payments Working Group next week.

Back to the experiment. How did SPC compare to one-time passwords? Stripe shared with us that with SPC:

I expect the Working Group will want to take up SPC as a formal work item, which means we’ll have a lot to do:

I want to thank all the people who have contributed to discussions, coding, and experimentation so far, especially colleagues at Stripe, Google, and Coil.

3 Responses to Secure Payment Confirmation, Stripe Experiment, and Next Steps