Moved from the Visual Contrast Subgroup page. This contains selected research notes of A.Somers' vision and contrast research to be made into a whitepaper.

Human vision is often taken for granted — yet in the year 2020 it is still not fully understood, and our knowledge of the human vision system (HVS) continues to grow with new research. Processing vision involves 62% of the brain and more than 22% of the brain is dedicated solely to vision processing.

How we perceive the world is much more a function of our neurology than a function of the simple optics of the eye. This makes answering questions regarding contrast and color non-trivial, and indeed challenging. Nevertheless, this section is intended to simplify to the bare essentials:

The WCAG 2.x contrast methods are being replaced for WCAG 3.0 by the APCA: Advanced Perceptual Contrast Algorithm.

The 2.x (1.4.3) contrast was conceived over 12 years ago, but unfortunately is not always applicable to today's web content. It is not perceptual, and fails to predict contrast appropriately if the background is darker than about #aaa. This is clearly a problem for use with any "Dark Mode" — WCAG 2.x contrast math is incapable of correctly indicating contrasts with dark color pairs. I discuss this with examples in this gist: https://gist.github.com/Myndex/c30dba273aa5eca426ad9f5200917c9d

In addition, there is a mass of misinformation about the level of contrast needed for fluent readability, especially for body text. While 1.4.3 indicates 4.5:1 is the AA level for the text size typically used in body text, it fails to specify a minimum size, and 4.5:1 is insufficient contrast for columns of small thin body text.

The accepted preferred standard for body text, as indicated in international standards such as the ISO, is 10:1 (that is using different math, for WCAG 2.x, it's more in the area of 11:1). 4.5:1 is inadequate for columns of body text. Other international standards such as ANSI and ISO also proscribe text below a minimum font size, which WCAG 2.x does not (WCAG 3.0 does). As a result, here again, we see text that is too small in webcontent, even for normal vision, not even considering impairments.

Here are some key points regarding font size:

Our perception of contrast is not only affected by surrounding elements and the environment, but the "Spatial Frequency" of the stimulus itself. A higher spatial frequency means smaller, thinner, and more crowded. This applies very much to text and the font size and design used.

In a typical eye exam for acuity (ability to focus), legibility at a particular level means getting three out of five letters correct, using bold wide letters at maximum contrast. This is wholly insufficient for fluent, easy reading.

"Legibility" is not "readability".

"Normal" print is usually considered 11.5pt to 12pt, this is equivalent of 16px on screen. And this is for normal vision. To relate this to real world visual acuity, if you think of an eye doctor's chart, and focusing on a capital E. If that E is at the legibility or acuity limit for 20/20 vision, and that is at full contrast, it is equivalent to a Helvetica capital E that is 3.9px on screen, meaning a 5.5px CSS font-size. (In print, this is a 4pt font on coated paper).

But that is the minimum for "just making out" the letters at ~70% accuracy. That is legibility, not readability. For readability, the lower case x-height needs to be a minimum of twice that cap height. This is called the critical font size for readability.

This means that while a 5.5px font may be the minimum for 20/20 legibility, the minimum for readability is 15.6px, hence the common default of 16px (in print, about 12pt, the typical standard in books). And this is for normal vision. Someone with 20/40 needs twice that, about a 31px font. This is why the WCAG standard requires that users have the ability to zoom text larger.

While text that is too small is hard to read, so is text that is too big. Above approximately 96px, reading speed decreases. Also, very large fonts make it difficult for a user to enlarge the smaller text on the page, as most browsers presently zoom all text regardless.

The current WCAG 2.x requires that text be able to be zoomed up by 200%, though that really only accommodates 20/40. Those with low vision need substantially larger text. New guidelines are in the works regarding this.

A proposal in the works is not based on a percentage size, but that indicates that the smallest content text be able to be zoomed up to 92px, while the largest content text is made no larger than 120px.

As used on this page, Visual Contrast means the perceived difference between two colors displayed on a computer monitor, such as the color of the text against the color of the background. Our perception of contrast is a function of the Human Visual System (HVS) which includes the eye, optic nerve, and several areas of the brain that are either dedicated to processing vision, or that share vision processing with other senses such as hearing.

The eye consists of an optical portion including a lens, and a light sensitive portion known as the retina. Muscles in the eye adjust the shape of the lens to adjust the focus of incoming light, so that an image of the world around us is focused onto the retina. Light sensitive cells on the retina then convert light into electrical impulses that are sent to the brain's vision processing center, called the visual cortex.

This complex system is subject to many forms of of impairment. And even "normal" vision changes substantially over a person's lifetime. For instance contrast sensitivity is very poor at birth, and it takes 20 years of development for normal vision to reach peak contrast sensitivity. Many people over the age of 45 develop the need for reading glasses as the natural lens in their eye grows larger and stiffer to where the muscles can no longer pull it into focus. And while people often think of acuity as a defining factor (i.e. 20/20, the ability to focus), vision is often more impacted by contrast sensitivity related impairments.

Our perception of contrast and ultimately the readability of text is affected by many interdependant factors, including: 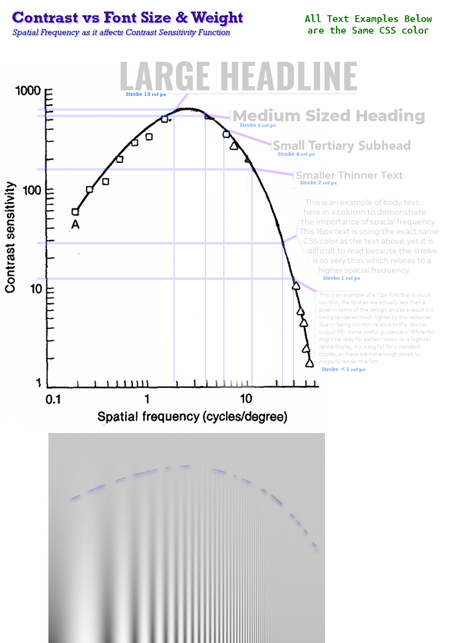 To the right is an image of the contrast sensitivity curve relative to spatial frequency, which for our purposes relates to font weight and size. You'll notice text examples at various sizes, starting with "Large Headline" at the top. All of the sample text is using the exact same CSS color.

All of these interdependent factors affect the perception of contrast and ultimately readability. As we are concerned with readability on computer screens, we can made some assumptions about a range of brightness, and a typical viewing environment. This provides a baseline standard for all users for best readability of content, or a minimum level of legibility for non-content. Then, we can set how different impairments require different adjustments or user customization to accomodate the neads of each individual user.

For instance, a user with poor "acuity", that is, poor sharpness where they cannot focus on small text, will need to be able to zoom the text larger. A user with poor contrast sensitivity may have good sharpness, but unable to perceive colors that are too similar in lightness. Yet another user with a glare problem may need lower contrast, and/or a reduction in blue, to reduce glare or halos interfereing with readability. Those with a color vision problem (sometimes called 'color blind') may have difficulty detecting contrast or lightness for certain colors, such as deep red.

Predicted contrast is reported as a positive or negative number between 0 and 150, using the methods in this guideline, based on the CSS color values in sRGB colorspace, and with device default antialiasing1. The Tests section has a lookup table for specific font and contrast combinations, but as a general guide:

Contrast is Not About Color

While color, meaning hue and saturation, does have a perceived contrast between two hues such as yellow and blue, hue contrasts are fairly weak. Luminance contrast—the difference between a light and a dark— is three times stronger than hue & saturation in terms of perception. The stark contrast in the IKEA sign is due mainly to the massive luminance difference in blue and yellow, not so much due to the hue.

But even then, the story of contrast is not over. Our perception of contrast is closely related to the size and thickness what we see. We see thin lines as a lower contrast than thick lines. There is a range when visual contrast is more affected spatial frequency, and another when it is more about color/luminance differences.

For very high spatial frequencies — for very thin fonts, particularly 200 weight and 100 weight, the perceived contrast is driven by the font’s thinness, and those fonts demand a near maximum luminance contrast to compensate for the very low contrast of the font.

Legibility refers to the point where one can just barely recognize a stimuli, for instance the "E" on an eye chart during an examination. Readability refers to the critical contrast level for easy and effortless reading, usually defines as the best reasding speed. 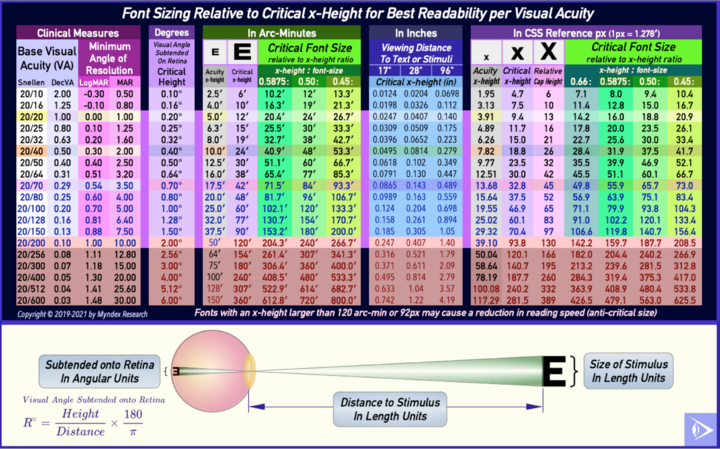 Critical Font Size for Readability. Notice that average vision (20/20) indicates a minimum critical size of about 14px minimum, 19px as preferred. And for 20/16 "normal good vision) the minimum is over 11px. 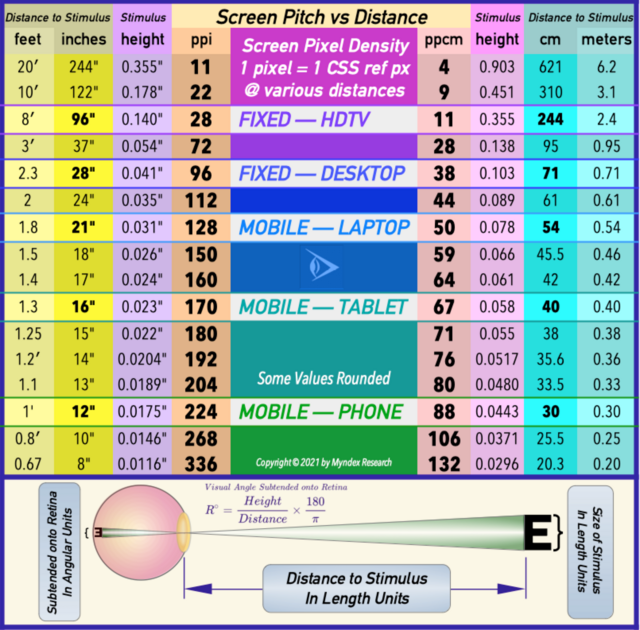 As can be seen, devices that are designed to be used closer such as a phone, is also designed with a higher pixel density, such that the relative visual angle of one CSS px remains the same. The reference is a desktop monitor at 28" with 96ppi or a phone at 12" with 224ppi all dresult in the same visual angle for a CSS px.

Much of classical design theory for print is built around readability, and can provide a solid foundation for good interactive design. Nevertheless, design for displays and devices present unique challenges in terms of perceived contrast and readability.

In physical printing where there is often only a single color ink for text, even in 4 color printing, design contrast is modulated by adjusting the font weight & size. With CSS, any color can be selected in addition to font weight & size, but this greater flexibility carries with it the need to mindful of end user perceptions.

Classical color theory does not always apply directly to backlit or otherwise illuminated displays. Nevertheless the old adage "make it right in black and white" is still good practice, as it is most important for readability to have good luminance contrast (i.e. light vs dark). Luminance contrast is perceived three times more than hue contrast. Good design will not rely on a change in hue & saturation (color contrast).

The following examples demonstrate how much luminance each of the three sRGB primaries provides to the total. Blue hardly eny at all. Againt black, even maximum blue is unreadable.

Maximum red interestingly is in the perceptual middle of dark/light, so for normal vision it is about equally readable on either black or white. However, it is to be noted that some forms of CVD see sRGB red as 35% darker, so red on black may be a problem for them.

Green makes up the vast majority of luminance, so as can be seen, full green is much brighter than either full red or full blue. As a result, full green against white is unreadable, and it must be lowered substantially, by about 75% luminance. 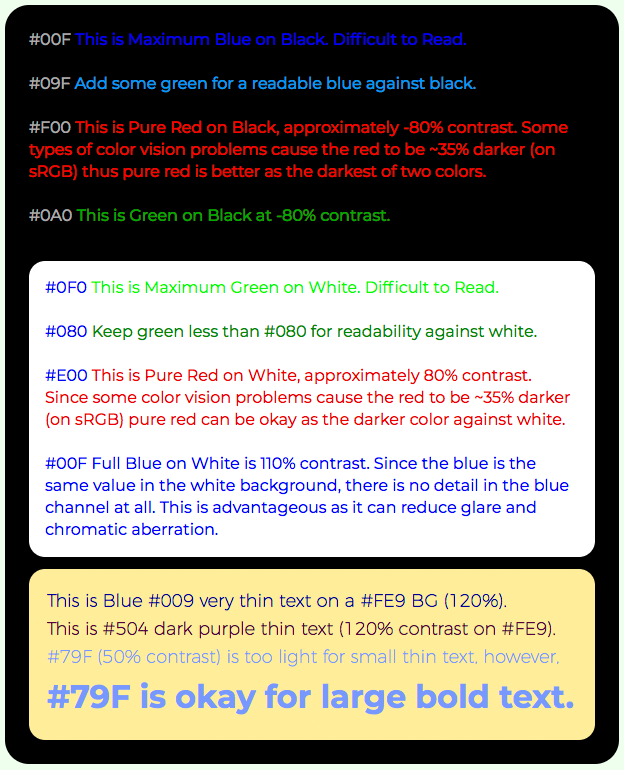 Smaller Examples This is just a smaller version of the example. 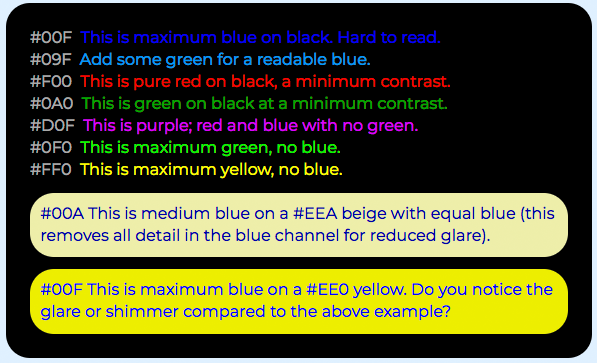 The following references are part of the work product of A. Somers 2019/2020 research into visual contrast and accessibility.