The SAPC/APCA Model for Predicting Contrast

The larger SAPC model takes into consideration human visual perception of contrast including the factors of spatial frequency expressed as font weight and size, padding and spacing, light adaptation for local, page-wise, and global (ambient), and the luminance and color aspects of the CSS colors used, based on an sRGB display with a standardized observer.

The basic APCA code is a reduction of the larger model, using a simplified estimation of local light adaptation, and using a lookup table to define a minimum font size for a given predicted contrast value.

The code repository for APCA and SAPC is:

Note: Files that are intended for supporting the Silver/WCAG 3 conformance model all have **APCA** in the file name. Files with SAPC in the name are part of ongoing research and should NOT be used for developing conformance tools.

For dark text on a lighter background:

For light text on a darker background:

Here's a screenshot, but this Wiki does not seem to have LaTeX or MathML — I have both available.

NOTICE: There have been minor changes to the scaling from that shown below. 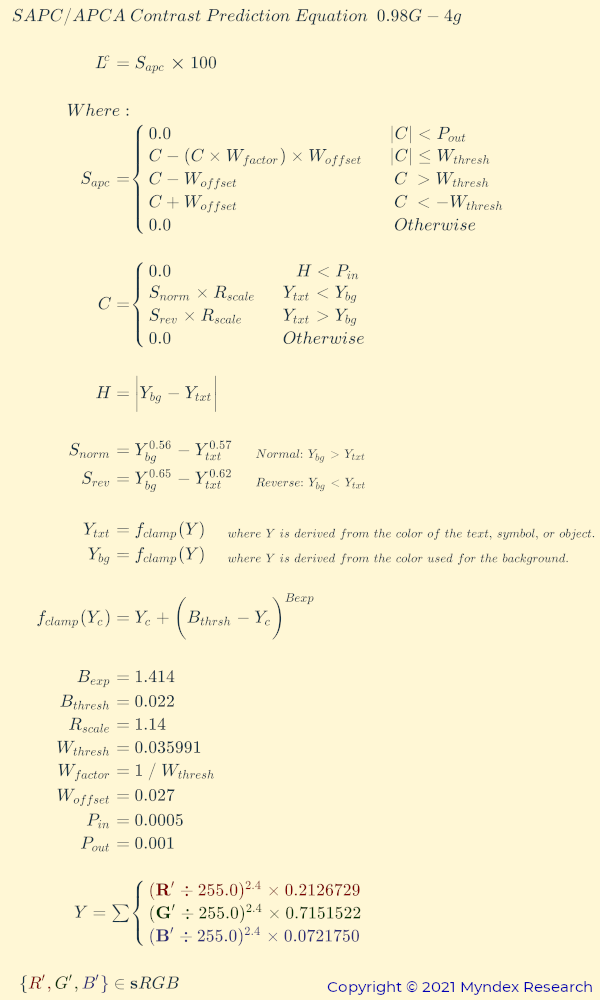 NEW!! Oct 24 2021 For the most up to date code and related information, visit: https://github.com/Myndex/SAPC-APCA

CURRENT CODE AT GITHUB REPO ONLY

This similarity only holds true in a very narrow range near the color #9e9e9e (per the G-4g scaling) or luminance 32Y to 40 Y. This narrow band is the only point where WCAG 2 and APCA “represent” the same contrast. It applies to colors where the foreground and the background are each equidistant from the mid color. Outside of this very narrow range only APCA remains perceptually accurate, the old method does not. The following table demonstrates these relationships.

This Tables is Revised for G Series Constants (G-4g)

Because APCA is perceptually uniform (within reasonable tolerances), a change by a certain Lc amount has a similar effect regardless of the present value or luminance. In the current scaling, increasing contrast by adding Lc 15 is approximately equivalent to the contrast change of going from a 400 weight font to a 700 weight font, for fonts smaller than about 32px.

As it happens, the old 2.x math method really starts to breakdown when both colors are below #aaa or if the text is above #999 among other things. This became a convenient color to have as a line up point so that there would be a point where SAPC and WCAG values matched and results were "similar".

EDIT: The new G Series exponents demonstrate that the old WCAG2 spec is completely out of line with perception. Darker color pairs that WCAG2 incorrectly pass will fail under APCA, and light text on dark backgrounds that WCAG incorrectly fail will now pass under APCA. Ultimately, APCA will provide as much as 50% more colors, and do so correctly.