Although map can be scaled up from grobal level to block level many times, built-in zooming implemented on some browsers doesn't support such zooming-level.

Performances for transition in zooming and panning

It may be required for zooming & panning with pinch/drag to seamlessly display the transition. In order to handle a great number of SVG shape elements, such display feature is often implemented with an approach to zoom and pan the map represented as a raster image while its transition after the redrawing is suspended.

From geo community, support of Mercator projection is frequently required for SVG Map. However, SVG2 does not support such a nonlinear transformation.

Ideas to solve the issue

In the latter case, the specification for SVG TL will be not changed because the transformation between Mercator coordinate system and SVG coordinate one is linear. URL corresponding to EPSG:3857 (not yed defined) just has to be written in srsName. Therefore, this falls outside of SVG specification.

Other use cases in cases where iframe is used 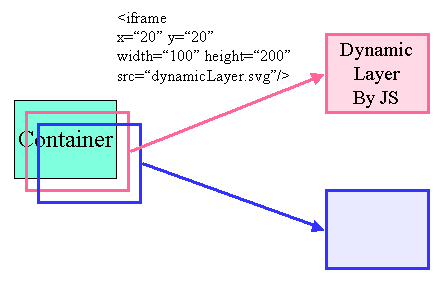 UI specially-designed for each Dynamic Layer

Each dynamic layer can own specially-designed UI with HTML.

A feature to appropriately switch visual effects according to zooming is essential for mapping. For example, as a map is zoomed-in, only proper size map tiles including proper size POI are necessary for display. There are some cases where POIs such as characters and icons on the map should be displayed in a fixed size and geographical position regardless of zoom ratio.

In addition, this feature is no longer limited to map. Here are use cases of the feature including other than maps.

Depending on viewport size, the size of the object to which transform="ref(svg,x,y)" is applied change. The fixed size object is required without relation to viewport size. Mr. Alex knows this.

It was determined by the government that following two specifications are adopted as Japanese Industrial Standards (de-jure standards of Japan) in the 2012 fiscal year.

Besides, these may be revised in accordance with recommendation of SVG2.

KDDI started to collaboratively work with GeoRepublic, which is representative company for promotion of OSM in Japan.

We have lost oppotunities to cooperative with GIS Community because SVG IG and SVG IG Japan are closed. In order to improve our current situation, there is a way to establish Mapping CG.

Themes to be considered