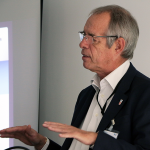 Bernard Gidon (W3C) at the launch of W3C UK and Ireland Office.

The W3C UK & Ireland Office was formally launched at the University of Southampton on Friday 14 October at a packed event that included talks from Bernard Gidon, who gave an overview of the W3C in Europe, and Phil Archer, who talked about current W3C activities.  There were also presentations by UK members about their involvement with the W3C, including David Rogers (Copper Horse Solutions) who gave a talk on Security and the Web, and Payam Barnaghi (University of Surrey), who talked about  the W3C Working Group on Spatial Data on the Web.

The Web Science Institute (WSI) at the University of Southampton is the new host of the W3C UK & Ireland Office, supporting an international community of member organisations that is leading the Web to its full potential. The W3C UK & Ireland Office will foster relationships with UK technology and policy leaders and help to promote the adoption and implementation of W3C standards in the UK. It will also recruit and engage with members in the region, and develop education and outreach programs to raise awareness of W3C’s role and standards activities by sponsoring and supporting local events where there is a focus on W3C topics.

Professor Dame Wendy Hall, Executive Director of the WSI, said: “The University of Southampton has played an active role in the Web community since 1994. The WSI feels like a natural fit to host the UK & Ireland Office.”

Bernard Gidon, W3C’s Europe, Middle-East and Africa Business Development Leader, commented: “We have found a strong match with the WSI as we continue toward the W3C’s mission. It is fantastic to see the energy and community at the WSI, and I look forward to moving on together as we develop the web community in the UK.”

The University of Southampton has been a member of the W3C since 1998, promoting new futures of the Web through W3C community groups including the Web Observatory, Annotations and Web of Things.