The meetup took place together with the Federated Social Web Meeting in Berlin. Some very incomplete minutes were taken, so this wiki page will aim at completing the conversation. Please fill in what you remember took place at the various sessions.

There were two sessions on Friday, a morning and an afternoon session.

Presented WebId Identity in Browser video and the USB crypto stick video too. 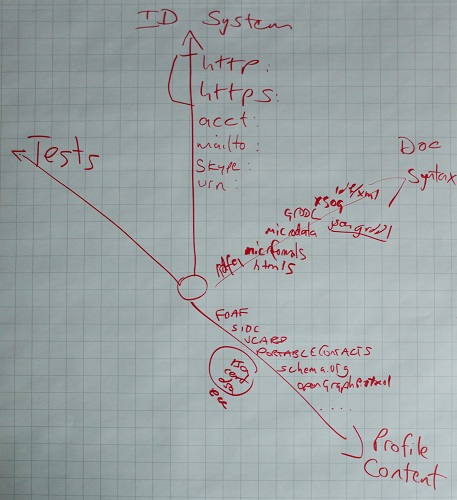 The graph shows how quickly things can get out of hand, if we don't limit the core somewhat. There was consensus on limiting the scope initially at least.

Blain argued that it was not necessary to have accnt:joe@gmail.com urls in the core of WebID. Accnt urls were more for human readability, whereas WebId hides the URL in the X509 Certificate, so it is no longer something that needs to be remembered.

Test cases were discussed. Mike Jones defended the Waterfall model. But someone with experience from the XMPP work pointed out how important implementation and feedback from work was. It was also pointed out that "An interoperability report on existing WebID implementations" made test cases a part of the XG's deliverables. Test cases could be create a dynamic report whose final version could be published for the final report. 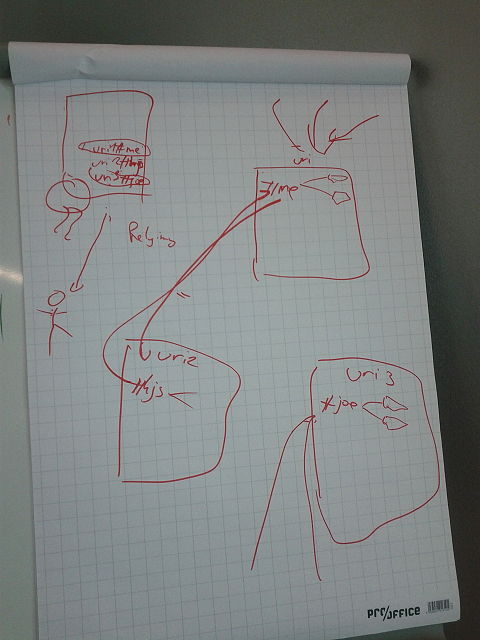 Mike Jones argued that: "The SubjectAltName MUST contain at least one WebID URI. It MAY contain more than one URI, but if it does each URI SHOULD point to the Same Document Content (i.e. mirror). If the URIs do not point to the same document the server SHOULD resolve all URIs and construct a single graph. If the Server does not resolve all different URIs then any resulting authorisation decision will be undefined. I think this is what I meant!"

Bblfish argued: "That we need clearly written out use cases to understand precisely why the documents at each WebId should be the same. This does not a priori seem clear."

We discussed if we can ignore critical extensions on the SSL layer and how this can be done with an Apache server. The conclusion was, that it is an option in the OpenSSL library or Apache which must be set at compile time.

There was agreement that more work needed to go in improving the spec. (was that in this session?)

Chat with Bergi on Test Suite

Bergis current Test Suite for WebID endpoints is based on Java and JUnit. To test an endpoint it's required to have a test page which presents the results in RDF/EARL format.

Every test case follows this procedure:

Some examples and where they differ from the default:

very detailed discussion with Mike Jones on delegation. (bblfish will write up the diagram and arguments)