An abstract data model of Captions

This document is trying to capture all existing uses of captioning and subtitles so as to be able to understand what features we require from a timed text format on the Web and more generically. The model should cover both, existing linear broadcast uses as well as existing online uses - and all of this on an international basis.

Note: The current descriptions are strongly oriented on the US CEA-608 and CEA-708 caption models. Internationalisation requirements have been added. It is not complete at this point in time, so please contribute, in particular if your experience differs from descriptions provided here. Check your favorite caption/subtitle format and see if its capabilities are covered in this document.

A caption is a piece of content that is related to an interval in a video's timeline and thus has a start and and end time. For purposes of generalisation (i.e. use for subtitles, descriptions, chapters etc) we also call such a timed piece of content a "cue". This document focuses only on the requirements of subtitle and caption cues.

Caption and subtitle cues consist of text or raster images of text. They also sometimes contain graphical items such as icons or logos. For our purposes here we will assume we only deal with text content in cues.

Cue text is either provided as horizontally or vertically rendered text. The text is internationalized, so it can be right-to-left or left-to-right displayed text. 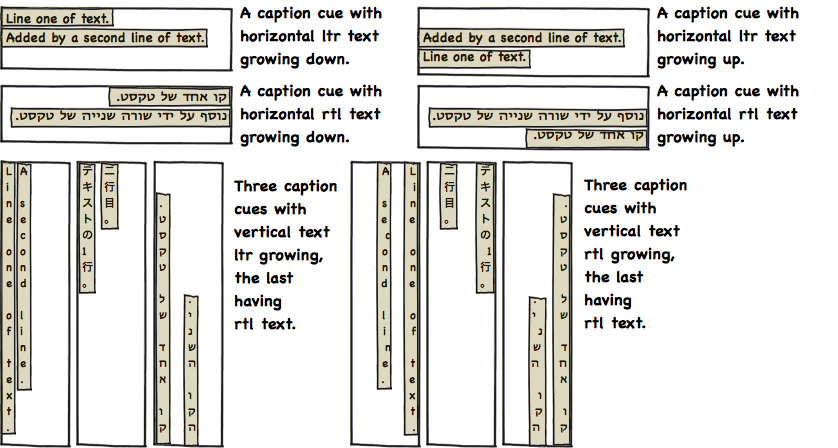 NOTE: It is unclear whether rtl text when rendered horizontally should grow from the bottom as the picture shows. Any i18n experts around?

A cue's content can consist of one or more lines of text, typically no more than four lines.

For horizontal text, several lines of text are displayed as a block with lines added below or above the first line.

For vertical text, several lines of text are displayed as a block with lines added either to the left or to the right of the first line.

The images under section 2 show cue text block examples with their lines in yellow. Note that for readability reasons the boxes have been made the same size, when in fact they should just be the bounding box around the text lines.

"Pop-on" captions are displayed in their determined location and aren't typically moved any more before their end time at which they are removed from display. 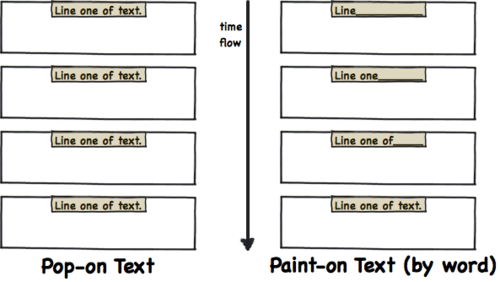 When successive lines of content are drawn ("roll-up captions"), a newly added line may be added in the position of an already presented line and push that line up (or down). This is typically used for live captioning.

Captions are designed to be rendered on top of a video's visual display, also called the "video viewport". Their positioning is by default given in relation to a video's width and height.

Section 5 has an example of a caption rendering box.

To allow specifying a more restricted rendering area and fixed alignment positions, the line length of a Rendering Box may be fixed in width (in percent of the video viewport's width) for horizontally rendered text, or fixed height (in percent of the video viewport's height) for vertically rendered text. Text that does not fit within the line length is wrapped. 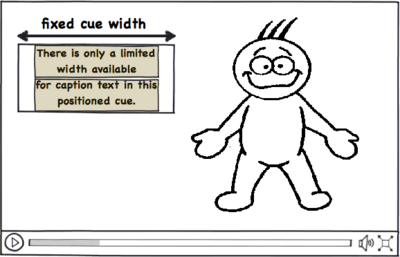 Wrapping can be caused by the viewer, too, when the viewer e.g. changes the font size or the video viewport size.

9. Anchoring of the Rendering Box

Any point inside a rendering box may be anchored on the video viewport, such that an added line of text will cause the box to grow equally from that anchor point. For example, in CEA-708, nine anchor points are used: the four corners, the four half-way marks along the sides of the rendering box, and the center of the box. In theory, however, any point can be used. 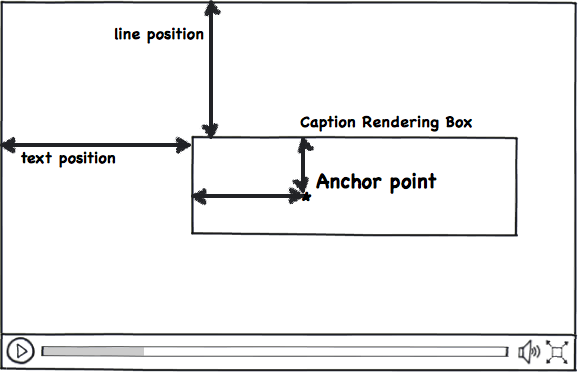 The growing direction of the Anchored Rendering Box depends on how the anchor point is specified from top and left. For example, a box anchored with a top of 0 and left of 50% offset will grow towards the bottom for horizontal text and equally towards the left and right for vertical text.

The caption content is displayed into this box either as a block of text in one go ("pop-on captions") or line-by-line (for successively added content). This means that when a new line of text is displayed, the previously rendered line(s) of text in the cue may change its place depending on where the rendering box is anchored.

[Q: do we want to allow new lines of overlapping captions to be added in a different growing direction to how the text withing a caption grows? For example, horizontal captions with multiple lines of text are rendered top-to-bottom. An overlapping caption may be added below or above that text. This could result in very confusing displays if multi-line cues and overlapping cues don't render the same way. Maybe we should instead allow to define only the direction in which new lines are added to the display, see point 4?]