Comments on the representation of the licensing information

The purpose of this page is to comment on the representation of licensing information in Metashare’s metadata model, its UPF ontology’s version and a possible improvement over them. In order to make this analysis, the following document input documents have been considered:

Comments on the Metashare Model

The Metashare model provides extensive support for the detailed representation of licensing information, making an effort that in some regards goes beyond of what has been described by license-specialized models. This representation permits two levels of detail. Firstly, the MS model allows referencing some of the most widely used licenses. Secondly, it allows explicitly representing as RDF some of the most important rights, conditions and constraints found in the most popular licenses.

The MetaShare model use the "distributionInfo" component to link a resource to the licensing conditions under which it is distributed. More specifically, the distributionInfo component includes all the legal information deemed important for a resource, e.g. IPR holder, distribution rights holder, availability conditions etc. The licensing information per se is described in Section "6.2.2 licenceInfo" of [1], where a component groups several license-related properties. The most direct (licence), declares the license among 29 possible values including some of the most common licenses and a few general. This list of possible values is a list of string literals (also enumerated as strings in the XSD implementation). Additionally, the MS XML Schemata devote a full schema for the licensing information: see META-SHARE-LicenseMetadata.xsd. The rest of the properties serve the purpose of further refining the license description and making it more eligible to human users. Detailed information includes describing the restrictionsOfUse (evaluationUse, commercialUse, shareAlike etc.), the price or the distributionAccessMedium (CD-ROM, paperCopy, etc.) among others. Each resource may be linked to one or more licenceInfo components, in case the same resource is made available under different formats and/or licensing conditions (e.g. for free for non-commercial purposes vs. at a price for commercial purposes, downloadable for commercial users vs. accessible through interface for academic users).

The following comments can be made:

Comments on the UPF ontology

The UPF ontology stays loyal to the MS model. Licence (whose name could have been the more common "License") is an object property, expecting to receive as object the individuals of the class License. This class has already some individuals predefined, most of them with a label and a description, but lacking a URI. The rest of the elements have been translated also as properties attributed to the class Resource. The translation of the licensing elements has been made as described in this spreadsheet excerpt: 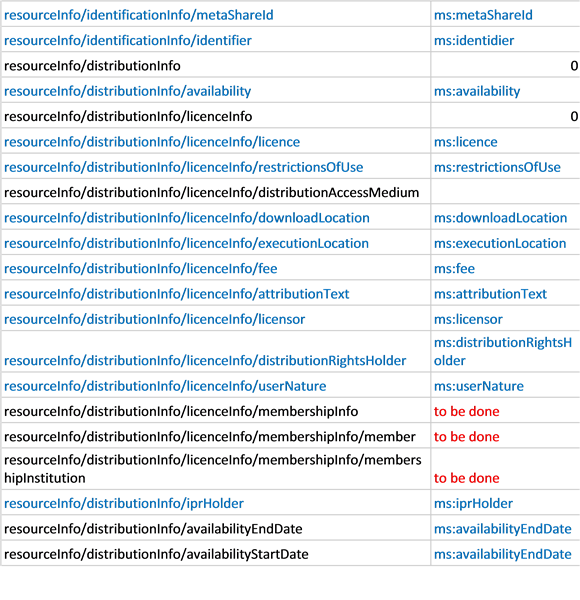 The following comments can be made:

In the figure below, the license might be one that "Gives access to the resource to Spanish research institutions. Redistributing or transforming the work is forbidden" 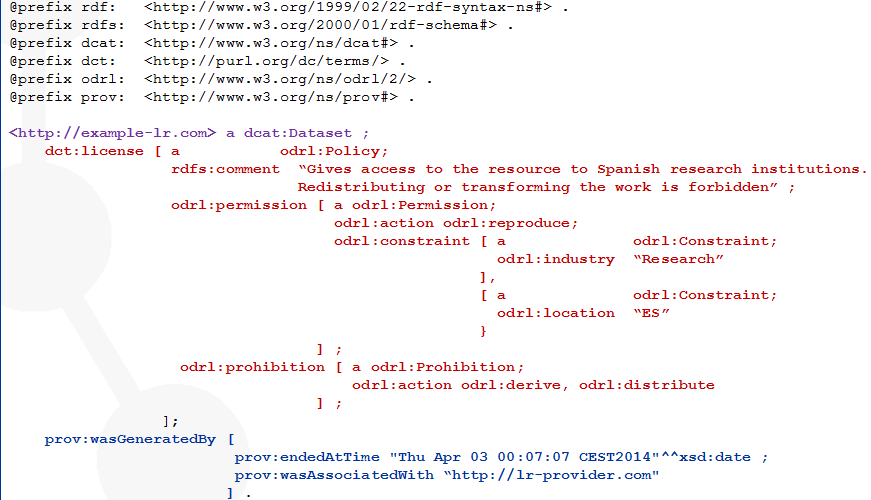 These are the recommendations and guidelines that have founded the license representation in the ontology.

R2. Make a RDF version of the most common licenses. Licenses will be more easily classified, searched and retrieved. The possibility of having access control system to linguistic resources will be enabled.

[1] Documentation and User Manual of the META-SHARE Metadata Model, online here and here