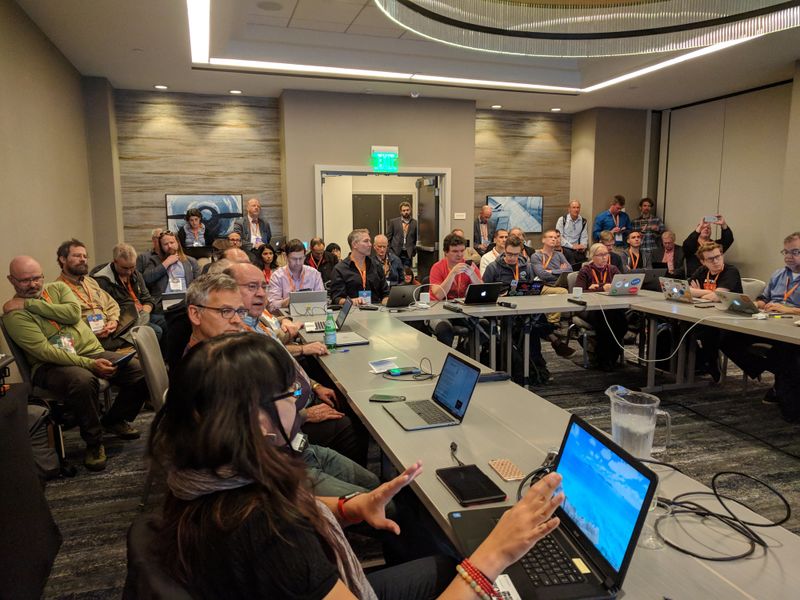 <fab_gandon> any link to the slides presented?

scribe: what's the canonical source for a claim
... trust project,

sandro: I've been involved in this work with my MIT hat, and more recently, thinking about whether there's a place for it at W3C
... we have a W3C community group, a meeting Friday morning

RobSanderson: there could be many sources of claims

danbri: hoping for the development of a fact-check commons
... there's a network of reviewers checking one another's work

ed: we're developing a schema anyone can write to
... creating a lens by which we can look at info

Ivan: you can have ratings of ratings orgs

andrewbetts: currently, claim review sits on its own; can we use linked data
... to annotate URL

danbri: claim review markup could have a pile of URLs, or wikidata could collect them

fab_gandon: any background in argumentation theory?

jenny_lee: a whole range of techniques

manu: is there a roadmap?

sandro: we have a very draft schema

Richard_Varn: would this be used to enable search?
... often, source of the claim is a part of the argument. Is the original source part of structure?

RichardVarn: lots of data in English language grading for common core
... grading for whether something is a valid argument
... machine-scorable

sandro: a test before I can post to social media?

danbri: there's an arms race aspect
... with a listing of credibility indicators, there's a rush to acquire them
... think about how we can resist, e.g. giving scientists tools to avoid being cited by junk

Brendan: IAB techlab, in ads context, problem of newcomers being given trust equivalent to established actors
... registry of persisten identifiers

jenny: we're not the black box; we're offering framework by which others can do analysis

dsinger: think about ways this could be subtly poisoned

ben: a whole chain of claims; who verifies the authority of the source, identity, etc.
... and whither satire?

danbri: we just added a satire tag to schema.org

<newton> FNC (http://www.fakenewschallenge.org/) has some labeled datasets that may be useful for training ML algorithms

Joerg: are you thinking about things changing over time?

sandro: not yet there