From Data on the Web Best Practices
Jump to: navigation, search

The collection of interrelated datasets on the Web is referred to as Linked Data and it can be used by various Semantic Web technologies (RDF, OWL, SKOS, SPARQL, etc.) that provide an environment where applications can query that data, draw inferences using vocabularies, etc [1] . All these technologies should provide data in a common format in order to facilitate on-the-fly data access or conversion. There have been many discussions among data generator, data publisher and data consumer communities about selecting a specific technology based on its validity, ease of use, learning curve, availability of tools in the commonly used programming environments etc.

This wiki page strive to address one of many question about use of RDF vs JSON-LD to store linked data. This page attempts to provide a general introduction of both the technologies and provide suitability analysis of various kind of applications to use either technology.

Assuming basic understanding of the user about LinkedData, the first and foremost point to note is that RDF and JSON-LD are NOT two mutually exclusive approaches. Following sections attempt to put more light on the topic.

The Resource Description Framework (RDF) is a language for representing information about resources in the World Wide Web. RDF is a graph based data model which provides a grammar for its syntax. Using this grammar, RDF syntax can be written in various concrete formats which are called RDF serialization formats. Most used serialization formats are Turtle, TriG, N-Triples, N-Quads and JSON-LD. RDFa is also a concrete syntax for RDF, but it was not defined by the RDF Working Group.

The JSON-LD extensions to the RDF data model are listed in following subsection.

JSON-LD was created for Web Developers who are working with data that is important to other people and must interoperate across the Web. As per one of lead editor of the draft The desire for better Web APIs is what motivated the creation of JSON-LD, not the Semantic Web. It starts at basics, assuming that the audience is a web developer with modest training. It strives to help developers get to the “adjacent possible” using commonly used web tools. It showcases the power of Linked Data without having to go through the somewhat steep learning curve that the Semantic Web usually has because of grand view of RDF, SPARQL, OWL etc.

Most of tool developer community perceives RDF data as a RDF/XML document which is only ONE OF the serialization format and probably not the easiest, cleanest serialization format of RDF data model. On the contrary JSON like syntax is well received because of ease of use. Most of highly used format such as RDF/XML, TURTLE etc serialized graph based RDF data model into a tree like structure of triples. On the contrary JSON-LD represent it as a graph. Although various recent formats such as TriG and N-Quads can represent multiple graphs. Also the allowed use of non-URI predicates presents a challenge for the overall semantic alignment of LinkedData.

It is important to underline that there is a need to educate/inform user community about the difference between data model(i.e. RDF) and a serialization format (i.e. RDF/XML, JSON-LD, TriG etc). Recommending a graph based, clean, easy to use RDF serialization format would be a good step that can help users to select/no-select JSON-LD based on their requirements. Following table lists few application categories with suitable data model approach. 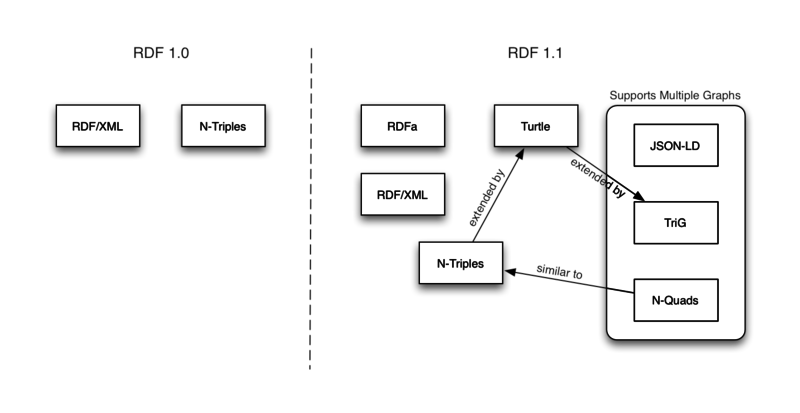 Support for internationalisation and multi-lingual strings

Just as RDF and RDFa support multilingual strings (e.g. for labels, descriptions etc.), this is also supported in JSON-LD - see Chapter 6.9 of the JSON-LD v1.0 W3C Recommendation: http://www.w3.org/TR/json-ld/#string-internationalization and examples 31-36 therein. In JSON-LD, the special key @language is used to indicate the specific natural human language of any non-typed plain string. RDFa 1.1 uses the @lang property as well as the xml:lang declaration in an XHTML web page or the lang attribute in HTML. RDF Turtle uses language tags such as @de, @fr, e.g. "Allemagne"@fr or "Deutschland"@de - see http://www.w3.org/TR/turtle/#literals. In all situations, the alphabetic codes for the human language are those defined in ISO 639-1, typically using the 2-character lower-case codes. See also http://www.rfc-editor.org/rfc/bcp/bcp47.txt A list of ISO 639-1 language codes can be found at http://www.iana.org/assignments/language-subtag-registry/language-subtag-registry

The patterns to be used are explained at http://www.w3.org/TR/json-ld/#string-internationalization See in particular example 34: a language map expressing a property in three languages:

JSON-LD can be used as a way to embed structured data within web pages as a single block that appears within the <head> element of an HTML page. Note that this is quite a different approach from inline approaches to markup such as the use of RDFa or Microdata. There are of course advantages and disadvantages of each approach, as described below: