This page discusses possible solutions for representing plain textual bodies, which are strings without structure or any other markup. Possible solutions as well as pro and con arguments were collected from the following discussion threads: 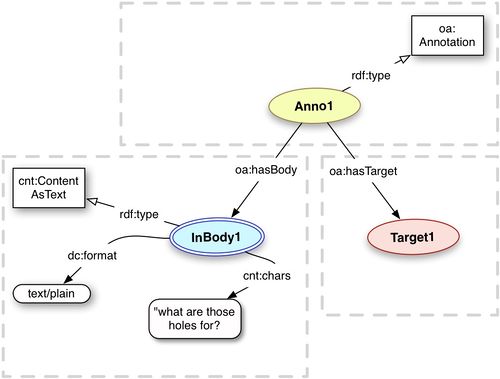 Consistency: all oa:hasBodies are nodes (resources or blank nodes); client doesn't need to check whether a node might be literal (Rob, Paolo, Bob)

Serialization in JSON-LD (recommended syntax for OA) is trivial (Rob)

(Extended slippery slope consistency argument) Many of the Textual_Bodies#Cons apply to one degree or another for other aspects of the OA model. Treating textual Bodies specially suggests doing so for these other cases also. For example users may find it inconvenient to provide an ISO 8601 date and so might require free text for oa:annotatedAt. Similarly, many users may want to provide only an annotator name, so there is an argument to not require oa:annotatedBy to be a foaf:Agent. --Robert Morris 14:55, 17 January 2013 (UTC) (Bob)

Further, it would encourage embedding all resources as literals, including CSS Styles, SVG Selectors and so forth, which is highly undesirable. (Rob)

Many real-world use cases use plain text literals (e.g., Flickr), which can be directly represented as such (Bernhard)

It would raise the bar for software developers, who have simple cases and will not understand why they should program against a model which introduces an extra level of complexity (Antoine)

what will happen in multilingual environments? CNT has no recommended patterns for describing the language of its ContentAsText node (should it be a tag on the object of cnt:chars? A specific property attached to the cnt:ContentAsText node) (Antoine, new)

Working with BNode raises many practical problems (cannot compute hashes over annotations, cannot do diff and patch, etc.). The use of Bnodes is therefore very controversial among RDF practitioners. Also the alternative, the use of UUID nodes for simple string bodies, introduces unnecessary cost because it requires the generation and representation of at least one UUID per annotation (Bernhard, new) 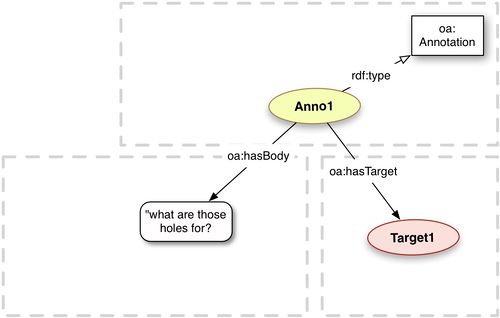 --Jacob Jett 15:39, 17 January 2013 (UTC)I think this approach may be best with the caveat that we should attach a class to the body node, e.g., "'what are those holes for?' a oa:LiteralResource". This seems like a scenario that classing addresses well and hypothetically implementations will be looking at for bodies for classes anyway in order to detect bodies that are specific resources. If I'm reading the W3C punning-OWL article correctly then this solution should also align with that. Adding class this way is, to me, symmetrical with oa:SpecificResource. In the SpecificResource case we are minting identity for a portion of a web-resource, in this case we are stating that the (body) resource does not merit an identity distinct from the annotation resource itself.

Literals bodies does not prevent the use of complex bodies. (Antoine, Bernhard)

schema.org has the same kind of approach. Some properties advertise classes resources as range; but the guidelines explicitly say that they can be used with simple literals instead (Antoine) Looking at the documentation I read "We also expect that often, where we expect a property value of type Person, Place, Organization or some other subClassOf Thing, we will get a text string. In the spirit of "some data is better than none", we will accept this markup and do the best we can". (Paolo)

It would be inconsistent with the rest of the model which allows any resource as a Body or Target, and thus would be a special case just for text in the Body. (current spec)

It is not possible to represent a single property in OWL-DL as having a range of either a literal or a resource, and this is considered important for both reasoning and integration with other systems. (current spec)

It makes both the JSON-LD serialization and implementation more complex, as the type of the Body would always have to be determined. (current spec)

While literals can have their language and datatype associated with them in RDF, there are other aspects of text that are important for interpretation that cannot be associated with a literal. Examples include the MIME type (text/plain vs text/html), the directionality (right-to-left versus left-to-right), the encoding (utf-8 vs ascii), plus of course metadata such as authorship, date of creation and so forth. (current spec)

Given the previous point, the possibility for a resource to encode an embedded textual Body is essential. As the cost of using a blank node is minimal, the consistency of a single method for embedding content is deemed more important than the option of sometimes using a literal.

It is important to distinguish textual tags from general comments. This would not be possible with just a literal.

Further, literals are incompatible with the multiplicity constructs. (Rob) 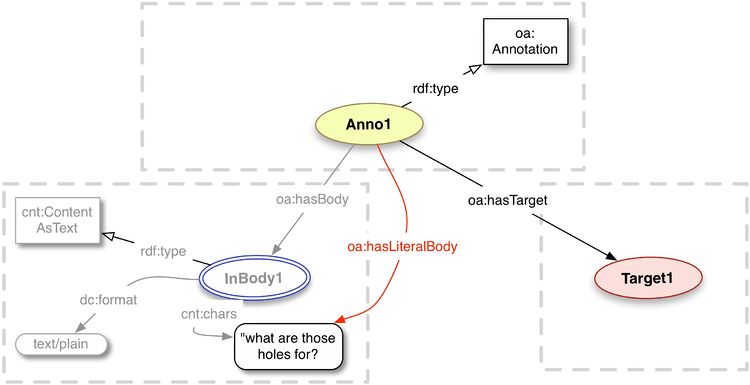 Guidelines on when to use oa:hasLiteralBody and oa:hasBody with (simple) embedded text content

The following axiom can be used by OA implementers to convert data from one less-desired pattern into their pattern of choice. It is not mandatory to apply the conversion rules when producing or consuming OA data; but it provides the only solution for full interoperability between two patterns.

The property chain (oa:hasBody,cnt:chars) is equivalent to the property oa:hasLiteralBody.

No interference with current spec (Bernhard)

It is possible to specify simple "conversion rules" to switch data from one pattern to the other, as in axiom S55 in SKOS-XL. Data expressed in one pattern can be converted to the other, which enables to apply definitions/constraints that are specified only on the other pattern (Antoine)

The pattern specifies (as a side effect) how bodies-as-resources should be used in language-specific setting: a language tag has to be used on the object of the cnt:chars statement attached to the body resource (Antoine, new)

More properties and patterns make the OA specification more complex to learn (only in absolute, because learners interested in the simple pattern would benefit) (Antoine)

This and the issue itself are conflating user needs with modeling requirements. There is no dispute that a cnt-like approach supports strings as the meaningful content of the Body (the user need). But in practice, this is easily solved with user interface software that only involves the user with adding strings. It really is not very difficult to make UIs that require of users only that they produce strings. (This point is Textual Bodies#Pros)(Bob) --Robert Morris 14:23, 17 January 2013 (UTC)

The definition of conversion rule is likely to be outside of OWL2(DL) (because property chains are for object properties) and even SPARQL CONSTRUCT queries and efforts like http://spinrdf.org/ (as conversion in one of the directions "creates" a blank node). On the other hand, this would help keeping aligned with the OA objective that any annotation base loaded with the full OA OWL ontology would remain in OWL-DL (Antoine, new) TODO: further investigation is required