Conceptual modules of the SSN ontology

This page describes the different conceptual modules of the SSN ontology.

The starting point has been the different figures appearing in the SSN XG Final Report [1] and the figures included here are subsets of those figures.

This module allows describing features of interest and their properties.

[RGC] That's a good comment. Right now in the SSN ontology the class is named "FeatureOfInterest", which fits with what you say because it is in the context of an observation. However, the class is documented as follows:

which refers to any feature in general.

Therefore, we may need either to change the documentation or to make explicit the differentiation using two classes for feature + feature of interest or to rename the FeatureOfInterest class into Feature.

Currently it is required that a sensor output has at least one observation value. This restriction is too strong, since the output of every sensor could not have a direct value. As an example, a sensor that produces as its output an image (or an audio file) is producing a specific sensor output (which is an information object) but such output does not have a direct observation value.

[RGC] Let's try with an example. Imagine that I have a sensor that captures people's pictures (e.g., in an airport). The sensor just captures the raw data (i.e., the image of a person) and not any other data that could be extracted from it. I would represent this as follows:

Now, if I have to add the ssn:hasValue property to the previous sensor output, I cannot think of any way of doing that doesn't seem artificial.

[RGC] If we take into account the mapping with DUL, a SensorOutput is a dul:InformationObject and an ObservationValue is a dul:Region. So they are intended to represent different things.

[sjdc] I would suggest that anything with "value" in its name must be an information object. The goal of making an observation is to increase our knowledge of the world, not to change the world. I also know that DUL introduces a few unhelpful disjoint axioms, though maybe that's not the problem in this case, it is the mapping that is in error.

The declaration of the sensingMethodUsed property adds redundancy to the ontology (i.e., the same information could be represented through the sensor class). From the modularization point of view, this is not good because it increases coupling between modules (i.e., the number of dependencies between modules). My suggestion is to remove the sensingMethodUsed property from the ontology; it does not affect its representational capabilities and the (conceptual) module would be cleaner (i.e., if I want to describe a sensor I don’t need to know about observations).

[Kerry] The "same information" instances are not necessarily the same thing. A sensor can have multiple "Sensing"s, ie can implement multiple sensing methods, while an observation can have (quite rightly) only (and exactly) one sensing method. What we could do instead is ensure that the SensingMethodUsed for an Observation is uniquely defined by observedBy composed with implements, which would require only one sensing method per Sensor. This is achievable as if any Sensor can have only one Sensing method we can just create a new Sensor for each different Sensing method. This redefines Sensor a bit, and is not backwardly compatible, but maybe not too much. The advantage of this rewrite is that it keeps that nice multiple viewpoints property of ssn -- you can come at it from the point of view of a sensor or an observation and it still makes sense. On the other hand, I think it is better left as is.

[SJDC] In my experience a sensor only implements one sensing method - that is pretty much definitional - else it is a 'platform' or compound-sensor of some kind. 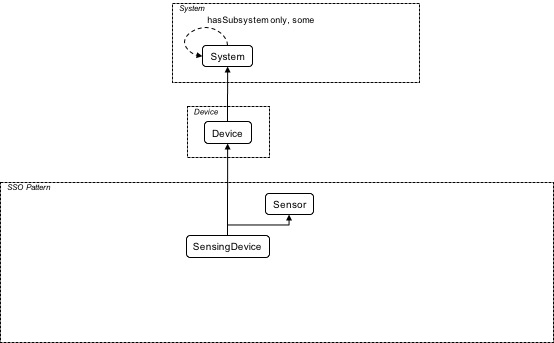 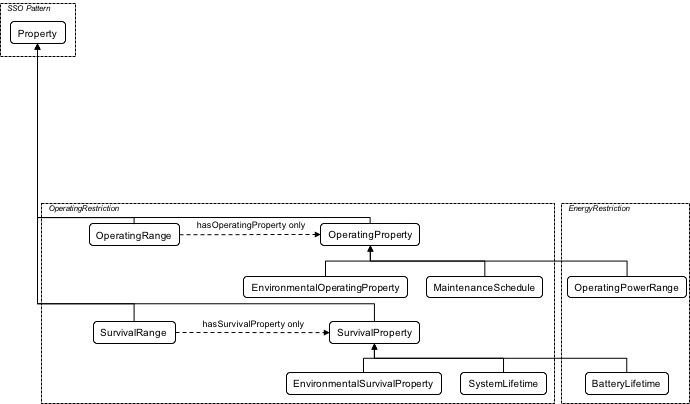 Even if I see that these measurement capabilities are related to the sensing process and not to a specific device, taking into account a broad perspective of sensors (e.g., including humans, algorithms) I don’t know if these capabilities will be naturally applied to any type of sensor (or even if some of them are only specific to sensing devices, such as drift).

Overview of the conceptual modules 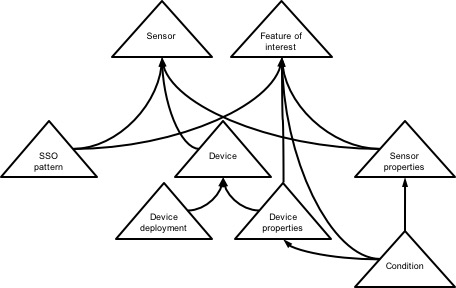 The figure below presents the same modules and also highlights those vocabulary terms (only concepts) that are reused from one module to another. 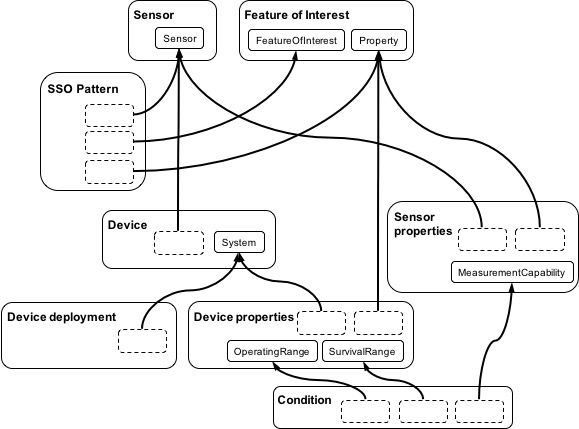 SSN Observations and Feature of Interest

(Sefki Kolozali) The SSN Ontology provides a vocabulary for describing concepts such as sensors, outputs, observation value and feature of interests. However, sensor observations can be in different format and shape. Therefore, there is room for improvement in the representation of sensor observations taking into account the multimodal sensory data, such as audio, video as well. I have developed an ontology called SAO Ontology (http://iot.ee.surrey.ac.uk/citypulse/ontologies/sao/sao), which enables people to annotate the observations as data streams (as a matrix), points, and segments based on TimeLine Ontology, PROV-O ontology, and SSN Ontology. This kind of conceptualisation can help the SSN Ontology to represent temporal features as well as different size and shape of data streams. I also think that feature of interest concept needs clarification as it often triggers a lot of discussions among the researchers.