Please contribute proposals for how any restructure for SSN should look. Include proposals for alignment with other well-known ontologies. Include worked examples if you can. Include references to publications where the restructure is explained or used if you can. Include a file of the proposed ontology if you can. Include proposal for "modules" of your ontology if you can. Just sketch the general idea if that is all you have. Pictures are useful. Your contribution here will be leveraged for consideration of a redesign, or design tweak of SSN or possibly just as a "how to" in the primer. Please attach your name to the proposal you make. Please also comment on other proposals here that you did not make -- and attach your name to any comment. Please include a sentence or tow that suggests how this proposal *might* be raised in the FPWD as an issue.

It is not a proposal, but this page on the SSN conceptual modules can support discussions.

This will not be used in our FPWD but will be carefully considered prior to the second PWD.

(Advice from Phil A and agreed by Scott Simmons, https://lists.w3.org/Archives/Public/public-sdw-wg/2016Jul/0120.html)

The principle is, I think, straightforward: any change made to a vocabulary shouldn't break existing implementations. Since we don't know who has an implementation, we can't write to everyone and ask "if we change this will your thing break?" Therefore we have to be cautious.

That's what leads to W3C saying that vocabulary terms may not be deleted or their semantics changed radically. But it only applies at the namespace level. If you have a new namespace, you can do what you like since nothing will break. *However* it's going to be really confusing if some terms in the old and new namespaces are the same but with radically different semantics. So my interpretation is:

Proposal 1 made by whoever for example only

Sentence for FPWD: The SSN should be extended to include a taxonomy of sensor types (this is na example only).
And here is the meat of my proposal. See the highly cited publication. See all these examples documented here and see all these implementations of my proposal in industrial applications etc.

Proposal 2 made by Kerry

Michael Compton made this proposal (recorded in our charter) some time ago. While that proposal makes some sense, I feel it might be too modular. I described it already on our wiki here, where this a diagram to explain how the bits relate to each other. I presented this proposal in a meeting (date TBD). I tried it a few times but ended up needing to bring in all of the modules anyway, so I found the modularisation was unhelpful, and there is a cost with the separate files in understanding which ones you need. In particular the encoding of observation values is left to dul and, with pulling dul out, I think we need to make up for that.

Also I have received lots of comments about how hard it is to attach values. And there is a lot of confusion about how it is meant to be done, out there in the wild. I would like to see a number of alternatives for recording values -- one would point to a datacube structure, another to an iot-lite like "service" interface at least for "current" values, and using dul or another upper ontology could be another. Here is a nice paper (if I do say so myself) that shows how to get very good query performance on large datasets of values using ssn as it is now, using a specialised storage architecture in an industrial application: Stocker et al Emrooz.

My preferred option is to leave ssn very close to what it is now, with dul removed (as already done on the webprotege instance by Armin), some other optional modules added but not imported or included in any way (such as prov, datacube, o&m or semsos, iot-lite, and some other extensions as documented on the wishlist). These would be done by building on ssn, and maybe sometimes importing it, but more often importing only through an "alignment" ontology (like the one Armin built for dul), so that it can be used either with or without the rest of ssn. I would also twiddle the dul alignment a little (in particular change Sensor to be an immediate subclass of Object instead of Physical Object, as discussed at a meeting). I would revisit the representation of observation values in SSN -- but I am short of a firm proposal at present.

That dul be disentangled from SSN (and not imported) but reconnectable by an alignment ontology fragment. That the representation of observation values be reconsidered in the light of dul removal, and a few options be offered for multiple circumstances. In general, that SSN as we know it know is very minimally altered beyond that.

SSN Observations and Feature of Interest

The SSN Ontology provides a vocabulary for describing concepts such as sensors, outputs, observation value and feature of interests. However, sensor observations can be in different format and shape. Therefore, there is room for improvement in the representation of sensor observations taking into account the multimodal sensory data, such as audio, video as well. I have developed an ontology called SAO Ontology [1], which enables people to annotate the observations as data streams (as a matrix), points, and segments based on TimeLine Ontology, PROV-O ontology, and SSN Ontology. This kind of conceptualisation can help the SSN Ontology to represent temporal features as well as different size and shape of data streams. I also think that feature of interest concept needs clarification as it often triggers a lot of discussions among the researchers. 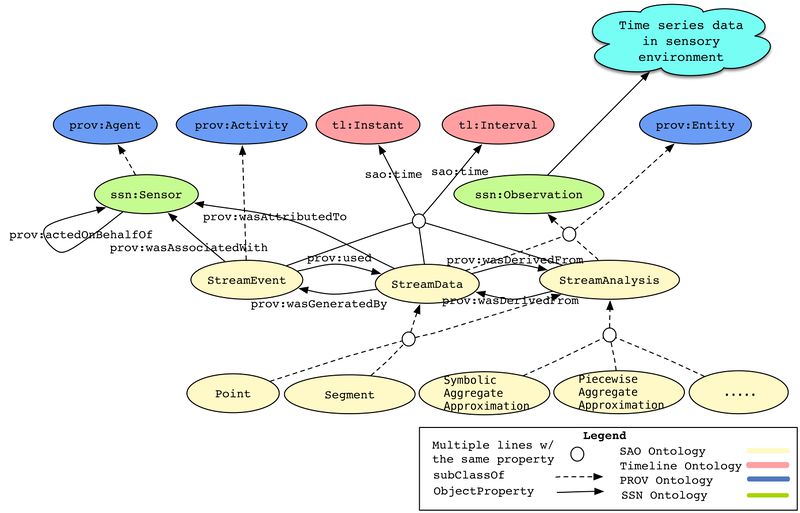 The workflow of the SAO Ontology and its links with the SSN, PROV, and Timeline Ontology.

Sentence for FPWD: The SSN should be extended to include patterns for sampling-features.
Sampling is intrinsic to most observation activities, since it is often impossible to exhaustively observe the feature of interest because of its extent or accessibility. A sample is designed to be representative of the ultimate feature of interest. Some sampling strategies are common across disciplines, particularly in the environmental sciences where routine sampling strategies include the use of sample points (stations, sites, pixels), curves (transects, boreholes, flight-lines, ship-tracks, trajectories), surfaces (cross-sections, images, scenes and swaths, quadrats, map-horizons) as well as specimens - where a representative individual or piece of material is taken from the field and moved to a laboratory for further observation. Sampling features are often directly related to other sampling features (samples collected along a ships-track, pixels in a scene, stations on a transect). A key property of a sampling-feature is that it was designed to sample a domain-feature, though the sampling feature may not provide direct access to the properties of the ultimate feature of interest (e.g. pixels in a scene provide spectral information, which may relate to land-cover in a tract). These relationships follow common patterns across a range of applications and disciplines, so a common model can be constructed.

A lightweight ontology for sampling features is provided at http://def.seegrid.csiro.au/ontology/om/sam-lite

In short, I proposed a horizontal and vertical modularization with a tiny core ontology (pattern) in a schema.org-style i.e., with a lightweight axiomatization. Horizontal modules would then add more classes and relations (e.g., for deployment, sampling,...) and vertical modules would add more expressivity (beyond a simple surface semantics) and further ontological commitments. My proposal also includes removing the entire DUL alignment and replacing it with a deeper axiomatization as discussed wrt action-155. See https://www.w3.org/2015/spatial/wiki/SSN_core_modules for more details.

See SOSA Ontology for description of a strawman broadly following this proposal. - SimonCox 2016-07-04

Compromise Proposal 6 made by Kerry January 2017

First, some core principles that should be honoured and that drive this design

So what does an architecture that meets these principles look like?

Update on SOSA and SSN Integration