A high-level abstract definition of coverage is given by ISO 19123 (aka OGC Abstract Topic 6) defining a coverage as a function from some n-dimensional set of points (the domain) to some value set (the range). While some models and implementations claim they rely on this abstract specification this does not achieve interoperability - many divergent implementations are conceivable, and have been done actually.

The first variant is particularly suitable for visualization, such as sending PNGs directly to the browser. The second variant is suitable for large-scale lossless data retrieval and transfer, such as in some processing data fabric: the GML header establishes canonical metadata, the binary format allows efficient representation for storage and transfer.

Grid coverages can be grouped into three categories of increasing complexity, based on CIM which in turn is based on GML 3.2.1 and GML 3.3):

Access flexibility. The CIM model is a genuine datacube where no axis is preferred. Implementations have sufficient freedom to find efficient data structures, such as partitioning an n-D cube into n-D sub-cubes (often called tiles or chunks), such as in Array Databases like rasdaman. This differentiates CIM from other (incompatible) approaches like WaterML and TimeSeriesML which essentially model timeslices. Allowing a generic partitioning can dramatically speed up access, such as through WCS (see below).

The OGC coverage model has been elaborated in collaboration with experts from all relevant domains, such as remote sensing, atmospheric and ocean modelling, and geology. The standard has proven stable and is a building block for further specifications within OGC (such as GMLJP2) and outside (INSPIRE, ISO).

In INSPIRE, the OGC coverage model is used (with slight variation). ISO is currently establishing OGC CIM as forthcoming ISO 19123-2 standard, plus revising ISO 19123 accordingly to become ISO 19123-1. This way, ISO will have the following coverage standards set:

Based on the OGC Coverage Implementation Model, a comprehensive suite of services has been established. On principle, coverages can be served by any WxS which supports features, as a coverage is a feature subtype. However, in practice services typically deliver complete, unmodified coverages which is not sufficient. The Web Coverage Service (WCS) suite of standards offers a modular set functionality which allows interoperable implementations ranging from simple subsetting services up to complex ad-hoc analytics.

WCS Core allows download of a coverage or a subset thereof, for example (reducing the extent in Lat/Long, slicing at a particular timestamp): 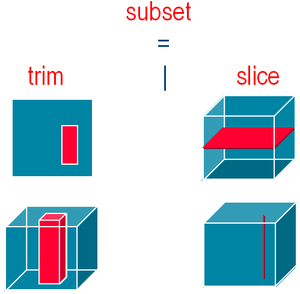 Without any further specification, coverages are downloaded in the original ("native") format as stored. Further, it is guaranteed that each cell is not modified (eg, rounded) in any way. This way, WCS is a reliable way for obtaining data within automated workflows.

Format encoding is supported by the core by indicating the MIME type of the output format requested, for example:

Example 1: "from a hyperspectral image HypImg, the near-infrared, red, and green band, in PNG":

Example 2: "add coverage NewCov to the service offering by fetching it from the URI location given; generate a new unique identifier and return it":

Requests can be expressed in a variety of functionally equivalent protocol bindings, including GET, POST, SOAP, REST (under discussion) and JSON ( in future). Again, protocol bindings are given as extensions to the WCS Core.

The Web Coverage Processing Service (WCPS) standard establishes a high-level, declarative query language on regular and irregular spatio-temporal grids. WCPS is streamlined for integrated data / metadata queries, thereby closing an age-old gap which has forced users in the past to work with heterogeneous paradigms. In this respect, WCPS is aligned with the vision of the W3C Spatial Web activity, providing a logically integrated, homogeneous information space.

Example: "From MODIS scenes M1, M2, M3: difference between red & nir, as TIFF - but only those where nir exceeds 127 somewhere":

From an implementation perspective, WCS and WCPS are mature - WCPS installations exceed 130 TB space/time datacubes on satellite image and atmospheric data. WCPS queries have been successfully distributed over 1,000+ Amazon cloud nodes. In the EarthServer-2 project, ad-hoc fusion on 1+ PB 3D and 4D datacubes will be established based on WCPS. WCS is implemented by major open-source and commercial tools, including rasdaman, GDAL, MapServer, GeoServer, EOxServer, OPeNDAP, ArcGIS, Pyxis

Re standardization, INSPIRE is currently working on establishing WCS as Download Service for coverages. ISO has announced that it is about to adopt WCS as ISO standard.